"His extraordinary intimacy with the piano, which withholds no secrets of keyboard brilliance or expressive colouring from him, maximises the potential in the scoring, however modest or extravagant, of whatever he chooses to play." Gerald Larner, The Times

Nikolai Demidenko’s passionate pianism is in demand worldwide. He has toured Australia and New Zealand and performed in most European capitals as well as throughout Britain. Russian born and trained, he was granted British Citizenship in 1995.

Frequent London recitals include the Great Performers series at the Barbican Concert Hall, the International Piano Series at South Bank Centre, and the London Pianoforte Series at Wigmore Hall. He plays annually at the Herkulessaal in Munich.

He has performed the Rachmaninov concertos with many of the world’s leading orchestras. With the Hallé Orchestra he has played the Brahms Piano Concerto No 2. As a solo pianist his repertoire includes Bach, Mendelssohn, Mozart, Mussorgsky, Clementi and Scarlatti.

Nikolai Demidenko has a flourishing relationship with the St Petersburg Philharmonic and Yuri Temirkanov. He also enjoys a fruitful collaboration with several Russian artists; a cello and piano duo with Leonid Gorokhov; piano quartets with the exciting new Hermitage String Trio; and a two piano partnership with Dmitri Alexeev. 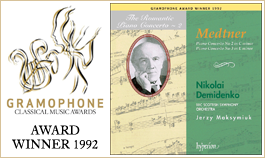