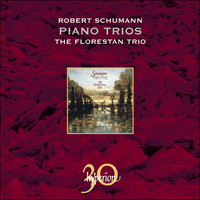 The Florestan Trio now turns its attention to Schumann's Piano Trios. These two works, Opp 63 and 80, were composed in rapid succession in the summer and autumn of 1847, some five years after the prolific year when Schumann composed most of his large-scale chamber works.

The Florestan Trio's earlier CDs, of Dvořák Piano Trios and the complete Brahms Trios, received outstanding praise; this disc is sure to do the same. 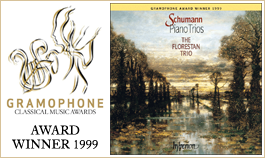 ‘Music-making just doesn't come much more sympathetic or stylish than this. Marvellously poised and evincing an impeccable sense of teamwork. Do try to make the Florestan Trio your first port of call’ (Gramophone)
‘No one who loves Schumann should miss this outstandingly fine new disc’ (BBC Music Magazine)
‘Revelatory performances. Technically flawless, yet they also convey a wonderful feeling of spontaneity and utter commitment to Schumann's art’ (Classic CD)
‘Incredibly tender playing of three musicians who are completely at one with each other’ (The Scotsman)
‘Some utterly magical playing here. An exemplary release’ (Hi-Fi News)

Schumann composed most of his large-scale chamber works in the single year 1842. His three string quartets, the well known Piano Quintet, Op 44, and the Piano Quartet, Op 47, were all written at this time; and right at the end of the year came the first of his works for piano trio – a set of four Fantasy Pieces, Op 88. Immediately before beginning this last project, Schumann noted in his diary the words ‘Trio by Mendelssohn’. On its publication two years earlier, he had hailed Mendelssohn’s D minor Trio, Op 49, as ‘the master-trio of the age’; and he may have been spurred on by Mendelssohn’s example to try his own hand at a series of similarly-scored pieces. Musically speaking, however, the Fantasy Pieces have little in common with Mendelssohn’s work, and it is more tempting to discern the influence of that composer in the first of Schumann’s ‘official’ piano trios, Op 63. Not only does this later work share its key of D minor with the Mendelssohn, but its opening movement similarly plunges, almost as though in medias res, into an atmosphere of extreme turbulence.

The two piano trios Opp 63 and 80 were composed in rapid succession, in the summer and autumn of 1847. Two external stimuli may have prompted him to return to chamber music after a gap of five years. (His only chamber work in the intervening period had been the Andante and Variations for two pianos, two cellos and horn; though since this was composed in the early weeks of 1843, it may be regarded as an extension of Schumann’s concentration on chamber music the previous year.) One stimulus was the fact the Clara Schumann had recently completed her Piano Trio in G minor, the other, the intense contrapuntal studies which she and her husband had carried out in 1845. In that year, Schumann composed a set of four fugues for piano, Op 72, as well as six organ fugues on B-A-C-H and the strikingly beautiful Canonic Studies for pedal-piano, Op 58. There can be no doubt that this contrapuntal activity left its mark on the intricate part-writing of the two piano trios of 1847.

Piano Trio No 1 in D minor Op 63
Schumann brings his contrapuntal art into play from the very start of the D minor Trio, Op 63, where we find that the opening notes of the violin’s impassioned theme are accompanied in the bass of the piano by what will be the melody’s second bar. (Those who complain that Schumann’s themes are unvaryingly four-square should note the extreme irregularity of this seven-bar melody.) ‘With energy and passion’ is Schumann’s indication for the first movement; and the sinuous main theme uncoils quietly out of the violin’s lowest register, against a swirling piano part, with a wonderful sense of subdued drama. Throughout the movement, in fact, the music’s breathless agitation is conveyed not by forcefulness (for all its restlessness, this is a piece which rises to fortissimo only for one brief moment during its coda), but by its extreme compression. No sooner has the opening melody reached its climax than it subsides in an expressive turn-like phrase on the violin, and the lyrical second subject opens up. This chromatic new theme is characteristically given out in canon, and its continuation introduces the first theme as a counter-subject on the cello. Nor, in the bars leading to the repeat of the exposition, does Schumann fail to show that the first subject itself can be treated canonically.

Having been unusually condensed in the exposition, Schumann is correspondingly broad at the centre of the movement. The expansion is achieved largely by means of an extraordinary moment of stasis which introduces not only a new theme, but also a strikingly original sonority. The violin and cello, both playing near the bridge of the instrument, produce that strange ‘glassy’ sound so beloved of twentieth-century composers, while the piano accompanies with shimmering chords right at the top of the keyboard, played with the soft pedal. Many of Schumann’s opening movements feature a marked change in mood and atmosphere at a parallel point – the Piano Concerto and the C major piano Fantasy, Op 17, provide familiar examples – but none does so to more startling effect than this. The new theme is one that dominates the remainder of this portion of the movement, and Schumann alludes to it again during the coda.

The scherzo-like second movement provides a striking instance of Schumann’s ability to unify apparently contrasting material. Nothing could seem more different from the driving dotted rhythm of the scherzo’s main motif than the smoothly rising and falling theme of the trio; and yet they both emanate from the same melodic line. The trio’s theme itself offers another example of Schumann’s fascination with canonic writing. Perhaps this explains why he ultimately rejected the intricate counterpoint of a projected second trio which would have lent the movement as a whole a much larger five-part form.

Together with his C major Symphony No 2, the D minor Trio belonged, as Schumann admitted, to a ‘time of gloomy moods’; and its slow movement is one of his great tragic utterances. There is a sense of world-weariness about the music here, engendered not only by the slowly resolving suspensions of the piano part, deep in the low register of the instrument, but also by the drooping phrases of the violin’s quietly rhapsodic melody. This sombre opening portion of the piece contains the seeds of the more flowing middle section. A phrase played by the violin in triplets shortly before the cello’s first entry foreshadows one of the middle section’s two main ideas; while a rising scale figure on the cello provides the germ for the other. The change from minor to major for this central portion of the piece is one that serves only to increase the music’s sense of yearning; and it is only with the turn to the tonic major for the relatively uncomplicated finale, which follows without a pause, that the tension is ultimately resolved in a joyous affirmation of faith.

Piano Trio No 2 in F major Op 80
The second of Schumann’s two 1847 piano trios could hardly be more different. It is a work which, as the composer himself said, ‘makes a friendlier and more immediate impression’. Once again Schumann demonstrates his mastery of unity in diversity: the opening movement’s quiet second subject, although it sounds utterly new, is simply a rhythmic variant of the energetic main theme. A staccato idea in the piano which follows it, with strategically placed accents highlighting a sequence of descending thirds, will provide the basis for some intensely contrapuntal argument in the development section; but before it can do so, Schumann introduces a broad new melody – an unmistakable quotation of the song Dein Bildnis wunderselig, from his Eichendorff Liederkreis, Op 39. The melody arises out of an important subsidiary motif which bridges the movement’s two main themes, and Schumann points up the relationship between the two ideas much later on, in the coda. The function of the relaxed song theme at this early stage is to offset the rigorous counterpoint of the section that follows where the staccato idea, with its descending thirds neatly picked out as a counter-subject, is treated in close imitation, both in its original form and in inversion.

No less song-like than the opening movement’s Eichendorff quotation is the long, inspired melody that unfolds in the opening page of the slow movement. Schumann had apparently intended to incorporate a further specific reference to the Eichendorff theme here, though in view of the prominence it has already assumed in the opening movement it was no doubt wise of him to abandon the idea. All the same, the descending shape of the slow movement’s melody provides an oblique reference to the earlier theme. The main melodic line in the opening bars lies in the violin part; but we may note that the cello and the piano play a long-sustained canon, and that the chromatically rising phrase with which the canon begins is one that will assume great importance in the further progress of the piece.

Schumann’s dictum that ‘the best fugue will always be the one that the public takes – for a Strauss waltz; in other words, where the artistic roots are covered as are those of a flower, so that we only perceive the blossom’ is one that could well apply not only to the artless counterpoint of his slow movement, but also to the intermezzo-like third movement, whose sighing theme is given out in canon throughout. The figuration of the more flowing middle section is taken over into the first half of the reprise, before a coda binds the two parts of the piece together.

The finale appears to take its point of departure from the flowing lines of the previous movement’s middle section, too. The entire piece draws its material from the three main constituents of its opening theme: the sinuous legato phrases with which the piano launches the piece; the staccato idea with which the cello responds, and which – as with the similar motif in the opening movement of the D minor Trio – will provide the basis for some close-knit imitative writing later on; and the first assertive phrase on the violin, which returns to form an important secondary theme. This last idea is reiterated over and over again in the coda, to bring the work to a close in an atmosphere of mounting excitement. With this exhilarating piece behind him, Schumann could press on with the large-scale project he had interrupted in order to write his two piano trios – the opera Genoveva.