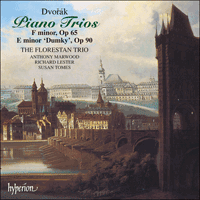 This CD introduces to disc the newly formed Florestan Trio comprising Susan Tomes, Anthony Marwood and Richard Lester, all now-familiar and highly respected artists after their many earlier recordings, both as members of other ensembles and as soloists. Miss Tomes and Mr Lester were, of course, members of the now-disbanded piano quartet Domus (which was joined by Mr Marwood in its last, award-winning recording of the two Fauré Piano Quintets on CDA66766).

The Florestan Trio takes its name from Schumann's name for himself in positive and carefree mood. (His name for his introspective self was Eusebius.)

The music is among Dvořák's most celebrated – his two most popular, but very different, piano trios. The dark and disturbing F minor is followed by the folk-inflected 'Dumky' of unconventional form and sunny disposition (a sequence of alternating slow-fast-slow-fast sections).

‘An enchanting disc’ (Gramophone)
‘Musicianly and refined performances that will give much pleasure’ (The Penguin Guide to Compact Discs)
‘This is a wonderful disc. Another jewel in the heavily-studded Hyperion crown. A richly rewarding treat’ (Classic CD)
‘Sunny music-making’ (Hi-Fi News)

In all, Dvorák seems to have produced six piano trios though only four survive. Two, probably composed in 1871 or 1872—although later in life the composer thought they had been written as early as 1865 and 1866—were destroyed, but not before the Adagio from one of them had been performed at a concert in Prague on 5 July 1872. The remaining trios occupy a significant place in Dvorák’s output; each stands at an important juncture in his development as a composer and each provides a clear image of his style at a particular time. The two piano trios Opp 21 and 26, composed in 1875 and 1876 respectively, show Dvorák’s deliberate move towards a much simpler musical style after the experiment of his early years. Op 21 in particular provides clear evidence that the melodic style which dominated his later compositions had already crystallized in this period.

The F minor Trio, Op 65, composed in 1883, not only signals new directions in Dvorák’s style, but shows evidence of an approaching crisis in his career. In the previous ten years, Dvorák had built a strong reputation in his native Bohemia, much of which had been founded on the composition of opera. His Moravian Duets and the first set of Slavonic Dances had taken his name across Europe in the late 1870s, the result of which in the 1880s was a flood of invitations to compose and conduct new works abroad, especially in England. Inevitably, the pressure on Dvorák was to tame his natural instincts towards something closer to the Austro-German vernacular of his good friend Brahms. Advice from Vienna, albeit well meant, was inclined to nudge Dvorák away from a course of direct, apparently nationally inflected musical style towards something more obviously Brahmsian.

At first sight the Trio in F minor looks as if Dvorák was willing to comply. He composed the work rapidly, but not without difficulty, in February and March 1883. His manuscript indicates that he had considerable trouble in deciding on the final shape of the score and the published version differs substantially from the first draft; Dvorák made numerous changes including altering the order of the middle movements to their present arrangement. The first performance was given on 27 October 1883 in Mladá Boleslav in Bohemia with Dvorák at the piano. A Prague première was given a fortnight later on 13 November by the same performers.

The Brahmsian manner is apparent in the musical rhetoric as an occasional homage, and the older composer’s example may also have prompted the slightly more restless nature of the secondary material in the first movement, a point at which Dvorák normally tended to provide a more sustained and self-contained melodic stretch. There may also be a small debt to a non-Viennese composition, in the shape of the F minor Trio composed in 1872 by the Czech composer, Zdenek Fibich, whose opening idea is strikingly similar to Dvorák’s. But the majority of the work is entirely typical of Dvorák, its powerful tone, clearly evocative of the tragic manner, perhaps prompted by personal circumstances. Just two months before he began work on the Trio, Dvorák’s mother died.

The urgency of the first movement, clear from the very opening, is present throughout with little let-up, even in the more subdued secondary themes. As a foil to the driving energy of the ‘Allegro ma non troppo’, Dvorák provided an intermezzo rather than a full blown scherzo. Although there are moments of great passion in this movement, its main melody has a wistful quality while the middle section provides the first stretch of relaxed lyricism in the work. The ‘Poco adagio’, with its eloquent, almost vocal melody for the cello, returns to the grand manner of the first movement.

The concluding ‘Allegro con brio’ is one of Dvorák’s most effective finales from this period. While it is tempting to see the cross-rhythms of this finale in terms of the Czech furiant, the impression is less of a composer striking a national pose than creating a sense of abstract, restless activity. If folk inflection is to be found, it is in the waltz-like second theme. However disparate these elements may sound, Dvorák maintains an impressive sense of purpose. The resolution of all this activity comes with a magnificently dark reference to the first theme of the first movement before a moment of sweet nostalgia is swept away by a brisk dash to the cadence.

Slightly fewer than seven years after the composition of the F minor Trio, Dvorák was again standing at the crossroads. His reputation as the major Czech composer of the day, and a powerful force in European music, was now secure. He had resisted the blandishments of those who wished to draw him to Vienna and was again beginning to take stock. Having avoided for a number of years the distinctly Czech libretto of The Jacobin, on the grounds of its provincial nature, he eventually composed it and its première in Prague in 1889 was one of the great operatic successes of his lifetime. Paradoxically, the very homely nature of the libretto had wrung from him music that was both touching and universal. The lesson for Dvorák was that even when sticking to familiar themes, his music could transcend narrow national boundaries. After this we encounter a more reflective, once again experimental composer. The Requiem Mass, composed in 1890 for the Birmingham Festival of 1891, and the Eighth Symphony of 1889 mark an emancipation from fading loyalties to Vienna and the scrutiny of Brahms and Hanslick.

The ‘Dumkas for piano trio’ were part of this emancipation. Dvorák composed them between November 1890 and 12 February 1891. There was little doubt in the composer’s mind that he was breaking new ground with this work. In writing to his friend Alois Göbl in 1890 he mentioned that his new pieces for violin, cello and piano ‘would be both happy and sad’, a reference to the way in which each movement is built on an alternation of slow and fast sections, the essence of the ‘dumka’ as Dvorák practised it. In doing so he challenged the very essence of the large-scale, conventional trio sustained by sonata structures. The Trio was also different in tone; Dvorák seems to have been set upon creating a work with a popular accent and thus suitable for all kinds of audiences. His efforts paid off; since its first performance in Prague on 11 April 1891, Dvorák’s Trio made of dumkas has been among the most successful of his chamber works.

Despite the novelty of the overall conception, Dvorák still seems to have had at least a vague notion of a four-movement framework for his six dumkas since the first three run together with barely a break. The first dumka epitomizes the nature of a style in which passionate and meditative melody, often song-like in quality, alternate. While Dvorák is prepared to develop his themes in the faster sections, the melody of the slower portions is usually sustained by imaginative instrumentation and ear-catching ornamentation. In the first two dumkas, he wears his heart on his sleeve; the fast passages are intoxicating while the slow have a burning intensity. The third dumka is quite different, simultaneously the simplest and most original of the set. Radiant opening chords introduce a near-vocal main theme whose repetitions are enhanced by subtle transformations before giving way to a wistful central section in the manner of a polka. In the fourth dumka a brisk march is interspersed with a bright ‘Allegretto scherzando’ complemented by ornamentation from the first violin reminiscent of bird song. The penultimate movement is perhaps the most extrovert with a bracing main theme extended and enlivened by almost Beethovenian development. The final number challenges convention still further; the key is now C minor, a third lower than the E minor of the start of the Trio. The musical language in this remarkable concluding movement is full of suppressed tension. Although most of the material is derived from the opening bars, Dvorák sustains the impetus through to a broad peroration which is both grand and tender, reflective and powerful.