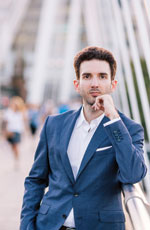 'Emmanuel Despax is a formidable talent, fleet of finger, elegant of phrase and a true keyboard colourist.' (Gramophone)

Emmanuel Despax has gained worldwide recognition as a singular artist, whose interpretations bring a rare sincerity and imagination to the music.

Past engagements include two tours of New Zealand, hailed by critics for his recitals in the prestigious Fazioli International Piano Series in Auckland and concerto performances with the Christchurch Symphony Orchestra. In the UK, Emmanuel Despax has also played with the City of Birmingham Symphony and BBC Symphony Orchestras, among others. He is also regularly broadcast on Medici TV, France Musique, BBC Radio 3 and Classic FM UK.

Despax’s critically acclaimed discography includes: The Romantic Piano Concerto, released in 2018 and recorded with the BBC Scottish Symphony Orchestra (Hyperion) with works by Hans Bronsart and Anton Urspruch, two students of Liszt, demonstrated 'a wide range of colours combined with an easy virtuosity' (Gramophone). The previous year, Despax’s recording of Chopin’s Preludes Op 28 made an impression for 'its poetic rendering of every detail, transmuting the Fazioli into a 1900s Pleyel, iridescent as needs be' (Diapason, 2017), and was chosen as Classic FM’s Album of the Week. His first CD for Signum Classics in 2013 was devoted to piano concertos by Saint-Saëns (Concerto No 2) and Stephen Goss, written for Emmanuel Despax, as well as Franck’s Variations symphoniques.

Recent and forthcoming releases for Signum Classics highlight the eclecticism of the French pianist’s repertoire—ranging from the digital exclusive The Sound of Music Fantasy (Despax’s own transcription based on themes from the famous musical) to his Summer 2021 release of a Brahms album including the Sixteen Waltzes Op 39 and Piano Concerto No 1 with the BBC Symphony Orchestra and Andrew Litton.

Born in Paris and now based in London, Emmanuel Despax started playing the piano in Aix-en-Provence before joining the Yehudi Menuhin School, then the Royal College of Music in London, studying with Ruth Nye, pupil of Claudio Arrau. He won numerous awards during his studies (Chappell Medal, Tagore Gold Medal), and benefited from the advice of Nikolai Demidenko, Leon Fleisher, John Lill, Yehudi Menuhin, Dominique Merlet, Mstislav Rostropovich, Murray Perahia and András Schiff. 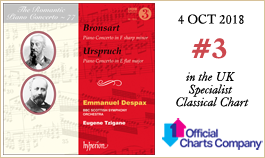