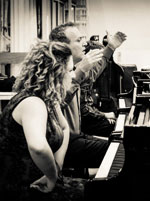 Formed as a modular piano ensemble, MultiPiano is dedicated to the rich literature written for keyboard ensembles, from one piano with four hands to several pianos in a variety of multi-hand combinations. The MultiPiano project was launched in 2011 under the umbrella of the Buchmann–Mehta School of Music, a joint institution of Tel Aviv University and the Israel Philharmonic Orchestra. Featuring some of Israel’s radiant young pianists and their mentor Tomer Lev, one of the country’s prominent musicians, the MultiPiano project attracted much international attention immediately upon its foundation.

The ensemble has performed in four continents, from the Beijing Concert Hall and Buenos Aires’s Teatro Colón to New York’s Merkin Concert Hall and high-profile venues in London, Frankfurt, Riga and Tallinn, collaborating with world-class organizations such as the Royal Philharmonic Orchestra, English Chamber Orchestra, Israel Philharmonic Orchestra and the Mozarteum Argentino. The ensemble has performed at the Taipei, Xiamen, Ottawa, Baltic Sea, Hualien, Tel Aviv and Jerusalem music festivals, as well as on television and radio networks across the globe. In 2015 MultiPiano was awarded the Israeli Ministry of Culture prize for ‘Best Israeli Chamber Ensemble’.

The ensemble extensively toured the Far East in 2011, 2012, 2013 and 2015; South America in 2012 and 2014; North America in 2013; and routinely tours around Europe. Considerable collaboration with Israel’s prominent orchestras has led to rare and daring repertoire selections, such as the premiere of Frank Martin’s Petite symphonie concertante for three pianos (originally harp, harpsichord and piano) and two string orchestras with the Israel Camerata Jerusalem, the first professional performance of Mendelssohn’s newly discovered Duo concertant: Variations on Weber’s ‘Preciosa’ for two pianos and orchestra, WoO25 (the original 1833 version), with the Haifa Symphony Orchestra and Israel Symphony Orchestra Rishon LeZion, and the two-piano version of Chopin’s Rondo in C major, Op 73, with the Jerusalem Symphony Orchestra, as well as concerto commissions by Israeli composers Aryeh Levanon and Oded Zehavi.

In 2014 MultiPiano collaborated with the English Chamber Orchestra in this recording of the complete Mozart multipiano concertos, and in the spring of 2017 recorded with the Royal Philharmonic Orchestra concerto works by Poulenc, Shostakovich, Frank Martin and Aryeh Levanon. In 2018 the ensemble presented a new version of Holst’s The Planets for piano and percussion ensemble, celebrating the iconic work’s centennial in a special concert at Merkin Concert Hall in New York. This unique version was created by seven prominent Israeli composers especially for MultiPiano and Tremolo percussion ensemble. 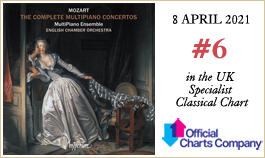