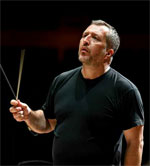 see also Thomas Adès (piano)
Thomas Adès was born in London in 1971. He studied the piano with Paul Berkowitz at the Guildhall School, winning the Lutine Prize for piano, before continuing his studies at King’s and St John’s Colleges, Cambridge.

His early compositions include Living Toys (London Sinfonietta), Arcadiana (the Endellion Quartet) and his first opera Powder Her Face (1995), which has been performed many times around the world. Orchestral commissions include Asyla and America: A Prophecy, the tone poem Tevot and concertos for violin and piano. His opera The Tempest received its premiere at the Royal Opera House in 2004 and in 2016 The Exterminating Angel premiered at the Salzburg Festival followed by performances at the Royal Opera House and the Metropolitan Opera in New York, all under the baton of the composer. In 1999 Adès started a 10-year relationship with Aldeburgh Festival as artistic director. In 2016 he became an Artistic Partner of the Boston Symphony Orchestra and has conducted the orchestra in Boston, at Carnegie Hall in New York and at Tanglewood. He coaches piano and chamber music annually at the International Musicians Seminar, Prussia Cove.

As a conductor, Thomas appears regularly with the Los Angeles, San Francisco and London Philharmonic orchestras, the Boston, London and City of Birmingham Symphony orchestras, the Royal Concertgebouw, Leipzig Gewandhaus and the Czech Philharmonic. In opera, in addition to The Exterminating Angel, he has conducted The Rake’s Progress at the Royal Opera House and the Zürich Opera, and The Tempest at the Metropolitan Opera and Vienna State Opera.

Adès has given solo piano recitals at Carnegie Hall, New York and the Wigmore Hall and the Barbican in London, and appeared as a soloist with the New York Philharmonic. He has performed Schubert’s Winterreise extensively throughout Europe with Ian Bostridge and in 2018 recorded it at the Wigmore Hall. In 2018, following a recital of Janáček's music at the Reduta Theatre in Brno, Janáček’s home town, he was awarded the Leoš Janáček prize.

His many awards including the Grawemeyer Award for Asyla (1999); Royal Philharmonic Society large-scale composition awards for Asyla, The Tempest and Tevot. His CD recording of The Tempest (EMI) won the Contemporary category of the 2010 Gramophone Awards; his DVD of the production from the Metropolitan Opera was awarded the Diapason d’Or de l’année (2013), Best Opera recording (2014 Grammy Awards) and Music DVD Recording of the Year (2014 ECHO Klassik Awards); and The Exterminating Angel won the World Premiere of the Year at the International Opera Awards (2017). In 2015 he was awarded the prestigious Léonie Sonning Music Prize in Copenhagenand in Spring 2020 the Tōru Takemitsu composition award at Tokyo Opera City. 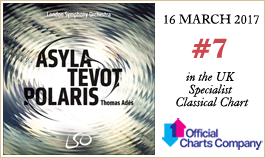