A new recording from Alina Ibragimova and Cédric Tiberghien sees the pair working rare musical alchemy on the three Brahms Violin Sonatas, as once more they transmute mere notes into pure gold. These works can seldom have sounded so radiant, making September's Record of the Month a very special event indeed. There's something of a Hyperion BrahmsFest this month, with the young soprano Harriet Burns presenting the eighth volume in our Complete Brahms Songs series. A fine recital comprising twenty-six lustrous miniatures on the eternal dilemmas of life, love and loss, the programme—as always—is accompanied and expertly curated by Graham Johnson.

Nearly half a century after Brahms, the turbulent waters of German late Romanticism could still produce such un-ironic masterpieces as the Pfitzner & Braunfels Piano Concertos. Markus Becker is fully alive to their nostalgic undertow and has all the necessary pianistic firepower to meet both works' considerable demands; he is joined by Constantin Trinks conducting the Rundfunk-Sinfonieorchester Berlin in this 79th instalment of Romantic Piano Concertos. In complete contrast, listeners seeking something rather less Teutonic will delight in Machaut The single rose, an exploration of that flower's association with true love—profane and (just occasionally) sacred—from The Orlando Consort, in whose voices this extraordinary music from the fourteenth century again sounds newly minted.

A new boxed-set from Signum brings together The Complete Organ Works of Charles-Marie Widor in the acclaimed recordings by Joseph Nolan which were originally issued separately over the last few years: all ten monumental symphonies plus the composer's other works for solo organ.

The north wind was a woman & other chamber music by David Bruce is a new album from Signum Classics featuring the Dover Quartet, Camerata Pacifica and soloists Nora Fischer (soprano) and Avi Avital (mandolin). These works respond engagingly to the natural world in its various guises, further illustrating the appeal of this successful new composer. 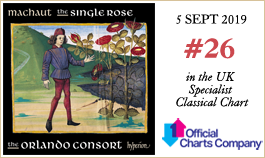