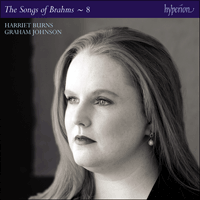 Volume 8 of our complete Brahms songs proves the ideal platform for Harriet Burns in her debut album. As usual, Graham Johnson’s scholarly booklet notes are an indispensable companion.

‘Buoyed by Johnson’s acutely judged accompaniments, the fresh-toned young soprano Harriet Burns, on her CD debut, spins a pure line and responds sensitively to the echt-Brahmsian moods of loneliness, regret and pathos … in the Deutsche Volkslieder, several sung here as duets, she and tenor Robin Tritschler nicely balance artlessness and telling characterisation’ (Gramophone)
‘The last two volumes were fine recitals from Benjamin Appl and Ian Bostridge, so the bar’s been set seriously high for the solo debut of soprano Harriet Burns, and she delivers (with the help of Johnson’s stewardship, of course). It’s a really well-planned recital … Harriet Burns makes a fine solo debut here; tenor Robin Tritschler’s contributions to the German folksongs are enjoyable as well’ (BBC Record Review)
‘It almost goes without saying that this is a well-planned recital for a recording debutant’s disc, giving her room to show different sides of her musical personality, and yet play to her strengths. Those strengths include an intrinsically appealing basic sound, control of line and tone, and identification with what she is singing about … the recorded sound is exemplary, and this is a strong addition to an invaluable series’ (MusicWeb International)» More
‘While Brahms’s Lieder discography is far from as comprehensive as Schubert’s it is still large enough to be a challenge for any newcomer, and a soprano has to compete with great names from the past—and not so distant past. Browsing my own not too extensive collection I found names like Elisabeth Schwarzkopf, Irmgard Seefried, Elly Ameling, Edith Mathis and Jessye Norman, who have all made indelible impressions through their recordings. What then has a young soprano, who here makes her CD debut, to offer against such competition? Quite a lot, actually … a fresh, unscathed voice of considerable beauty and a willingness to find adequate nuances. Her piano and pianissimo singing is lovely throughout … I look forward to hearing more from Harriet Burns’ (MusicWeb International)» More
„Alles in allem offenbart die Programmauswahl die Stärken ihres durch und durch lyrischen Soprans, der wunderbar aufblühen kann wie in den beseelten „Sechs Gesängen“ op. 7, in denen auch Gedichte von Eichendorff und Uhland vertont wurden. Sie sind deutsche Romantik pur, und Harriet Burns offenbart einen tiefen Sinn und eine Begabung für derlei Repertoire“ (Opera Lounge, Germany)
'Ditmaal brengt sopraan Harriet Burns Sechs Gesänge Opus 7, van toen de componist amper twintig jaar oud was. De andere geselecteerde werken bieden een reis door de rest van ’s mans carrière. Topwerk op deze schijf is een selectie uit de volksliederen met pianobegeleiding Wo033, gepubliceerd in 1894. Brahms was een van de eersten die volksmuziek naar waarde schatte. Hij beschouwde de 49 liederen als toppunt van zijn kunnen' (Kerk & Leven, Belgium)

This album is the eighth in a series that presents the entire piano-accompanied songs of Johannes Brahms. As such it is a companion to the series undertaken by Hyperion for the songs of Schubert, Schumann, Fauré and Strauss.

Brahms, like Schumann, but unlike Schubert with his much greater output, issued the majority of his songs in opus number groupings. There is a tendency in modern scholarship to suggest that he envisaged, or at least hoped for, performances of his songs in their original opus number groupings. Of course, one cannot deny that some planning (though of a rather variable kind) went into the arrangement of these song bouquets (the composer’s own expression) for publication. Good order and cohesion in printed form (as in an anthology where poems are arranged to be discovered by the reader in a certain sequence) do not automatically transfer to the world of the recital platform where one encounters a host of different practical problems, casting (male or female singer) and key-sequences (high or low voice) among them.

Each disc of the Hyperion edition takes a journey through the career of Johannes Brahms. The songs are not quite sung in strict chronological sequence (Brahms had a way of including earlier songs in later opus numbers) but they do appear here more or less in the order that the songs were presented to the world. Each recital represents a different journey through the repertoire (and thus through Brahms’s life). In a number of these Hyperion recitals an opus number is presented in its entirety. Here it is the songs of Op 7 (tracks 3–8), a portmanteau of early settings rather than a group devoted to a poet, but seemingly united (whether deliberately or not is a moot point) by a theme of loneliness and abandonment with a short redemptive postlude.

We can imagine certain (but by no means all) of these groups of songs grouped and published together for various reasons, but it is quite unclear whether Brahms was making a point thereby. Far from dreaming of complete evenings of his songs in public performance, he preferred to hear no more than three of his own songs in any one concert. This astonishing information comes from an invaluable book of essays: K Hamilton and N Loges, eds: Brahms in the Home and the Concert Hall. Between Private and Public Performance (Cambridge: CUP). The conventions of music in the home, where so many songs were first heard and discussed in an environment of lively and cultivated enthusiasm, did not include listeners buckling down in respectful silence to a substantial sequence of songs, as if they were at a public concert. Brahms seems to have been happiest hearing his songs as Hausmusik and surrounded by supportive informality—and I dare say Schubert would have said the same about the Schubertiads. The present-day hunger for cycles, hidden, implicit, unknown or concealed, seeks to feed the appetite for a kind of recital format that is favoured, perhaps over-favoured, in the twenty-first century, but was almost unknown in the nineteenth.