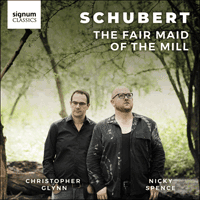 The fair maid of the mill

The story was not a new one. As places of romantic adventure, mills have a long literary history, stretching back to some of Europe’s oldest songs and stories. Typically, a young man (shy, poetic, a singer of songs) finds work at a mill, falls in love with the beautiful maid who lives there, but loses her to a co-worker (often a hunter) who is more attractive and exciting. Grain—these old tales all tell us—is not the only thing to be crushed and transformed in mills.

And in early 19th-century Germany the story was in vogue. An opera by Paisiello and a novella by Goethe were just two of many elaborations on the theme that captured the popular imagination. So when the cultured and sociable circle that gathered regularly at the Berlin home of Friedrich August von Stägemann had the idea for a poetry contest, along the lines of the fashionable tradition for Liederspiele (where a story is told in a series of poems or songs), it is perhaps not surprising that they settled on the subject of a mill maid and her rival suitors. Each member of the circle took on a different part; each began to compose their own verses. After a while, the respected composer Ludwig Berger was brought in to set some of them to music—but his greater contribution to history was to spot that one member of this group, the young writer and translator Wilhelm Müller, alone had the talent to rise above the amateurish level of the rest. Berger was relentless and often rude in pushing Müller to make endless revisions to his poems until a complete narrative cycle was finally ready for publication around 1820.

Müller’s talent had converted the semi-improvised song-play of the Stägemann circle, with its wide cast of characters all speaking for themselves, into something more interesting: a monodrama, where the whole story is told from the miller’s point of view. The poems quickly found favour throughout Germany but Müller, confiding to his diary, always knew that they needed music to make their fullest effect:

I can neither play nor sing, yet when I write verses I sing and play after all. If I could produce the melodies, my songs would be more pleasing than they are now. But courage! Perhaps there is a kindred spirit who will hear the tunes behind the words and give them back to me.

Well over 200 composers were inspired to ‘hear the tunes’ behind Wilhelm Müller’s words during the rest of the 19th century, but no one doubts that his true kindred spirit was found when Franz Schubert discovered the poems while visiting his friend—the composer Benedict Randhartinger—sometime in the early 1820s, and virtually stole the book so he could set them to music. When Randhartinger called to reclaim his property the following day, Schubert offered, by way of apology, the first songs of a new song cycle, Die Schöne Mullerin, which he had sat up all night composing. It’s a good story, worth repeating even though it may not be true (Randhartinger was a good musician—who accompanied the first complete performance of the cycle in 1856—but an unreliable source) because it gives a sense of what a momentous discovery Schubert had made.

Müller had elevated his material from its homespun origins, but Schubert goes further still. He dispensed with the rather sentimental prologue and epilogue, which had anchored the story at a safely ironic distance, and omitted several poems that provide background details, focusing instead solely on the central character and his sad story.

So why a new English version of Die schöne Mullerin? It is often (and rightly) said that the essence of Lieder is in the close marriage of words and music. But it is also in the immediacy of the storytelling. And for English-speaking audiences that storytelling can sometimes seem to take place at one remove. Even those who understand German words will not have the same emotional response to it as they do to their mother tongue. A good translation is an act of discovery—a retelling, not a replacement. I commissioned this modern English version of Fair Maid in the hope that, like a good screen adaptation of a classic novel, it could bring a masterpiece to a new audience, as well as offering a fresh perspective to those who know it well.

A translator’s note
This was my first foray into Lieder translating. I’d done operas aplenty—but I’d always heard the admonitions of my Lieder-loving father in my ears. ‘Operas are story, songs are poetry.’ Therefore libretti can be rendered in audience friendly English, whereas poetry was too delicate to tamper with.

A few factors changed my mind. Firstly, and most vitally, the support and patient patronage of Christopher Glynn, the onlie begetter of almost all my work in this arena. Then the growing conviction, after years of working in the theatre, that songs were story too and therefore intrinsically theatrical. The fact that it was this song-cycle, Schubert’s first (and the first in all music to tell a story) which Glynn used to reel me in seems particularly serendipitous. The Fair Maid of the Mill (as we christened it) is not only theatrical, but it was conceived by its theatre-loving poet Wilhelm Müller as a sort of drama with a Werther-like hero. It’s easy to forget that in 1823, Schubert was as much an opera composer as a songwriter. And that in Müller’s original collection the cycle is a sort of theatrical performance. He wrote a prelude and an epilogue to be recited in front of the curtain, as it were. Schubert didn’t set those poems but seems to have preserved the shape—the middle song is called Pause, which in German theatre denotes an interval.

The shape of the piece is similarly theatrical. We begin with an ‘I want song’ (as they say in musical theatre), the longing for ‘somewhere’—which we also find in West Side Story and Wizard of Oz. Then there’s a journey, then our hero falls in love. Then the Interval. Then Act Two (as it were) where things go wrong. There’s a rival, then despair and, finally a death.

So, a story. And one told in direct simple language, which is the last thing that gave me the courage to attempt a translation. Müller doesn’t have the depth of Goethe, nor the irony of Heine. What he does have is an immediate uncomplicated and almost unpoetical access to emotion—which is very heartening for the English versifier. If I can be simple and direct then I can match in some measure the poetry that moved Schubert so marvellously. And if even some of that clarity can touch the ear of a non-German speaking audience then maybe some of my love of these songs can be transmitted. I hope so.