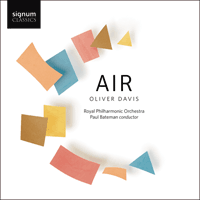 A new album of fancies from Oliver Davis, predominantly exploring themes of nature, the environment and the natural world. 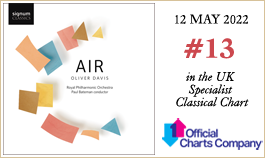 The Hanke Brothers and I have worked together on several projects since they commissioned me to compose The Elements in 2018. Flow is a gently paced piece with a lilting melody, which is played in different combinations by all four soloists. Initially it was written as a chamber piece but I felt the additional string orchestra would enhance the work. Groove was conceived from the outset as a work for the Hanke Brothers and string orchestra, making use of energetic staccato string patterns against jaunty melodic themes in the solo parts.

Winds of change is a single movement work for piano and strings. I expanded this piece from a short improvisation, adding the string parts at the last minute just before entering the studios to record the orchestra.

Simon Littlefield wrote a collection of poems in the summer of 2021 following a discussion we had about exploring the natural world. When I first read the poem Mirror, I wrote a song with a deliberately sparse accompaniment. Given the title, the co-producer suggested using a glass harmonica in combination with the piano. Not owning one, I decided to make my own by selecting different sized wine glasses from the kitchen cupboard and filling them with varying amounts of water! Every day, in contrast, uses a very wide range of instruments. I created a choral effect by recording Grace Davidson’s voice in multiple layers with additional vocals by myself.

For many years Kerenza Peacock and I have been discussing the concept of a piece about trees. One day I received in the post from her a book by Annie Davidson entitled ‘How to be More Tree’. This brilliant book became the inspiration for Arboretum. The first tree I decided to write about was the aspen. I read that aspen trees work together sharing water and nutrients through their root system, so only as a community can they grow in strength. Aspen is followed by açai palm, a tree which is native to Brazil and Argentina, hence the Latin American feel of this movement. The score is marked pizzicato, the plucked sound further accentuating the South American rhythms. 'The vanishing mahogany of the Amazon' naturally has a very sombre feel, although the major key ending of this movement reflects the hope that we may still manage to save the rain forests. The last movement describes my response to the description of the mountain hemlock. I wanted to create rhythms that depicted this beautiful tree swaying in the mountain winds.

The Mountain Songs are three poems by Simon Littlefield that I have set to music. They are performed on this recording by tenor Jeremy Budd. Though written in 6/8, 'Compass' has a waltz feel in the accompanying strings and is punctuated by each direction being sung at the end of each of the four verses; North, East, South and West. When I first read the poem 'How long' it had an instant impact on me and the song, for want of a better description, literally wrote itself. 'Who owns the mountain?' could have been scored a number of different ways but I opted for a positive response to the questions the poem asks.

Though this album explores themes of the natural world, The veil between worlds is a ballet that has other worldly insights: in the choreographer’s own words ‘our common search for spiritual and physical connection’. The ballet was commissioned by Pacific Northwest Ballet and written for choreographer Edwaard Liang. I originally scored the work in Autumn 2019 ready for its premiere in Summer 2020, which was subsequently delayed for a year owing to the pandemic. Written as a violin concerto, the work opens with a movement in 5/4. This unconventional time signature for ballet is compensated by a strong pulse, giving the choreographer a metre to work to. The second movement relies on a recurring chord that first appears as pure string harmonics. Since harmonics are high in pitch by their nature this allowed the unusual arrangement of the violin solo being substantially lower in pitch than the accompaniment. Though the third movement also contains string harmonics, in contrast it’s a faster paced and more aggressive section of the ballet. Much of the orchestral and solo parts are accompanied by a repeated pattern played by the violas which forms an undulating ‘bed’. In the following slow movement I wished to develop a serene atmosphere comprising of multiple solo lines which are at times fast moving against a very slow orchestral chord sequence. After establishing the theme with a single violin accompanied by that chord sequence, the solo violin is joined by two additional violin solos and eventually the original violin solo theme is coupled with a cello solo, here played by Katherine Jenkinson. The last movement has a sense of fun to it, and is quite mischievous in feel. For much of the movement the solo violin, played here by Ben Baker, is in a duet with an additional solo violin part, performed in this recording by Kerenza Peacock.

Owing to the long period of time between the music being completed and the ballet being staged, it was all the more moving when I eventually watched the premiere streamed live from Seattle. Despite all the restrictions imposed on choreographers and dancers during this period, Edwaard choreographed a stunning ballet, performed and staged beautifully by Pacific Northwest Ballet.