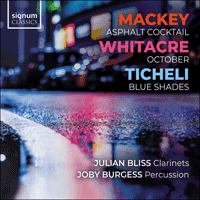 From the comfort of their own homes, Julian Bliss and Joby Burgess unleash the considerable forces at their disposal to create some fascinating reincarnations …

During the first lock-down I decided to record some more multi-track pieces, but wanted to do something a little bit different. Over the last decade I’ve become increasingly more involved in the American band world, and have grown more familiar with the repertoire: if you were in a band at school you may already have performed these three pieces, or others by the composers.

These multi-clarinet versions were arranged with the fantastic percussionist Joby Burgess—we each recorded our parts at home before I edited our performances together. It has been a huge amount of fun to create, as well as a fascinating challenge for me to learn more about the production side of music.
Julian Bliss

It was great to hear from Julian a couple of months into the first national lockdown here in the UK, who introduced me to John Mackey’s riotous Asphalt cocktail. Having heard Julian’s brilliant recording of Steve Reich and Marc Mellits a few years back, I knew this project would be kick ass. I added the full arsenal, often in duplicate of percussion to the multi-tracked clarinets from my home studio. Working in isolation, although only just a few miles apart, this was a great way to undertake a new duo project in 2020. I hope you enjoy our vivid selection of re-imagined American band music.
Joby Burgess

Asphalt cocktail
Asphalt cocktail is a five-minute opener, designed to shout, from the opening measure, 'We’re here'. With biting trombones, blaring trumpets, and percussion dominated by cross-rhythms and back beats, it aims to capture the grit and aggression that I associate with the time I lived in New York. Picture the scariest NYC taxi ride you can imagine, with the cab skidding around turns as trucks bear down from all sides. Serve on the rocks.
John Mackey

October
October is my favourite month. There is something about the crisp autumn air and the subtle change in light that always makes me a little sentimental, and as I started to sketch I felt that same quiet beauty in the writing. The simple, pastoral melodies and subsequent harmonies are inspired by the great English Romantics (Vaughan Williams, Elgar) as I felt that this style was also perfectly suited to capture the natural and pastoral soul of the season.
Eric Whitacre

Blue shades
In 1992 I composed a concerto for traditional jazz band and orchestra, Playing with fire, for the Jim Cullum Jazz Band and the San Antonio Symphony … I experienced tremendous joy during the creation of Playing with fire, and my love for early jazz is expressed in every bar of the concerto. However, after completing it I knew that the traditional jazz influences dominated the work, leaving little room for my own musical voice to come through. I felt a strong need to compose another work, one that would combine my love of early jazz with my own musical style. Four years, and several compositions later, I finally took the opportunity to realize that need by composing Blue shades. As its title suggests, the work alludes to the Blues, and a jazz feeling is prevalent—however, it is in not literally a Blues piece. There is not a single 12-bar blues progression to be found, and except for a few isolated sections, the eighth-note is not swung. The work however is heavily influenced by the Blues: Blue notes (flattened 3rds, 5ths and 7ths) are used constantly; Blues harmonies, rhythms, and melodic idioms pervade the work; and many 'shades of blue' are depicted, from bright blue, to dark, to dirty, to hot blue.
Frank Ticheli