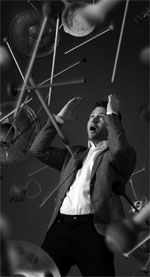 One of Britain’s most diverse percussionists, Joby is best known for his virtuosic, often lissom performances, daring collaborations, extensive education work, and regularly appears throughout Europe, the USA and beyond.

Joby commits much of his time to his own projects, most notably with the audio visual collective Powerplant—a collaboration with sound designer, Matthew Fairclough and visual artist, Kathy Hinde—where the worlds of minimalism and electronica collide. Powerplant has released albums on Signum and nonclassical featuring music by Steve Reich, Gabriel Prokofiev, Graham Fitkin and Max de Wardener.

Joby performs, records and collaborates with artists including Peter Gabriel, Will Gregory (Goldfrapp), Dario Marianelli, Max Richter, Sasha and Eric Whitacre. Joby can often be heard on major film and TV scores, notably leading the percussion on Black Panther, The Darkest Hour, The Last Kingdom and was featured on the score to Alex Garland’s Ex Machina. His extensive collection of instruments is featured exclusively on Spitfire Audio’s Percussion Redux, recorded at the world famous Air Lyndhurst Hall, London.