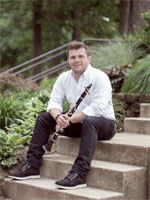 Julian Bliss is one of the world’s finest clarinettists, excelling as a concerto soloist, chamber musician, jazz artist, masterclass leader and tireless musical explorer. He has inspired a generation of young players as co-creator of the Leblanc range of affordable clarinets, introducing a substantial new audience to his instrument. Julian started playing the clarinet aged 4, going on to study at the University of Indiana and in Germany under Sabine Meyer, turning professional aged 12.

In recital and chamber music he has played at most of the world’s leading festivals and venues, including Gstaad, Mecklenburg Vorpommern, Verbier, Wigmore Hall (London) and Lincoln Center (New York). As a soloist, he has appeared with a wide range of international orchestras, including the São Paulo Symphony, Chamber Orchestra of Paris, Auckland Philharmonia, the London Philharmonic and Royal Philharmonic Orchestras.

Julian has also arranged pieces for clarinet and piano, notably Rachmaninoff’s Cello Sonata, Op 19, the third movement of which has been set as a grade 6 piece on the new London College of Music clarinet syllabus.