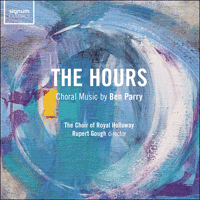 The Choir of Royal Holloway is considered to be one of the finest mixed-voice collegiate choirs in Britain. Here they lavish their skill on the choral music of Ben Parry, performing works secular and sacred by this most versatile of composers.

Ben Parry has garnered a reputation as a musician of extraordinary versatility. His communicative skill, across multiple genres and ensembles, imbues his work with a freshness and relevance to a wide range of audiences. Included on this disc are sacred and secular compositions which hint at Parry’s various influences and inspirations. Notable in this respect, is Parry’s long-term collaboration with author and lyricist, Garth Bardsley. Crafted from a rich harmonic palette and a clever rhythmic box of tricks, Parry’s music is instinctively lyrical; musically perspicacious, it never loses the performer and listener from its heart.

The disc opens with Sun Soul—one of two concert pieces written for Aldeburgh Voices in 2011. Bardsley’s text explores the wonders of sunrise and sunset and captures something of the corporeal nature of light. Parry’s response embraces the tenderness of dawn and dusk, and the majesty of the day. The dawn breaks forth with Parry’s setting of the popular English folk song, Early one morning. The simplicity of the traditional melody is preserved throughout, despite a harmonic adventure to the flattened sub-mediant. Then, First Day recalls the dawn of the world and tells of the transformation from darkness to light. Written whilst in Dallas, Texas, this piece was composed for the BBC Singers in 2013. Underscored by an organ part which evokes the swirling mists of creation, dense vocal textures deliver, in Latin, the first five verses of the book of Genesis.

My heart’s in the highlands (for upper voices and piano) is an original setting of a Robert Burns (1759-1796) poem which Parry wrote for Malcolm Goldring and youngchoirs.net. It reveals Parry’s fondness for Scotland, where he lived for eight years, and its Celtic character is derived from the prevailing mixolydian mode.

Algernon Charles Swinburne (1837-1909) is often associated with a rebellion against the conservative values of his time. In Music: An ode, Swinburne employs vibrant imagery, assonance and alliteration, and complex speech rhythms. Parry rises to the challenge of the theatrical nature of the text and, in this commissioned work (first performed by the Portrait Choir, resident choir at the National Portrait Gallery) he imaginatively incorporates aleatoric sections which enable the choir to move from gallery to gallery. Bardsley’s two exquisite poems, Spring Sonnets, are set to music by Parry, written for and dedicated to the BBC Singers. Whilst Bardsley’s poems might be conceived to be set to music, listeners to this disc should take some time to read them out loud for themselves and revel in the musical arc and the structure of the written texts. Parry’s approach to these poems is complex: we move through different metres, rhythms, tempi, tessiturae; and, we are introduced to chromaticism and harmonic invention which further beautify Bardsley’s art. The aesthetic union of poet and composer is—perhaps, unconsciously—alluded to in the closing lines of the second sonnet: ‘If blind to transformations such as this, What other precious moments might I miss? ’

A second Robert Burns text, Ye banks and braes o’ bonnie Doon, was arranged for The Dunedin Consort, the distinguished Scottish ensemble co-founded by Parry in 1996. Again, we experience the inspiration Parry finds in Scottish words and music and the well-known melody is further beautified by the careful melodic writing of the lower parts.

Snow, a richly evocative poem by Bardsley, was set to music by Parry for the Loughborough Endowed Schools. Sympathetically homophonic choral writing and an independent piano accompaniment capture something of the stasis and fragility of the winter landscape. Parry was commissioned to write New Year Carol (a poem by Walter de la Mare, 1873-1956) by Suzi Digby and the London Youth Choir to celebrate the centenary of Benjamin Britten (1913-1976). For Parry, aged 7, meeting Britten was a moment of inspiration: as fellow Suffolk-born composers, Parry remains inspired and indebted to this great mentor. Parry has worked extensively with young musicians for over 25 years, and My spirit sang all day was written as a sight-reading test piece. As Artistic Director of the National Youth Choirs of Great Britain, Parry was instrumental in setting up the Fellowship training programme: eight young singers premiered this work (with no rehearsal) at the launch of the programme in 2015.

Four short sacred works are included on this disc. O nata lux de lumine is an evening hymn for the Feast of the Transfiguration. Plaintive in style and driven by speech rhythms rather than harmonic clichés, the musical phrases are written with the voice in mind. Parry clearly marvels in the aesthetic beauty of homophonic simplicity. Ave verum corpus dates from the 14th century and remains one of the most commonly heard Latin texts heard today. It tells of Jesus’ presence in the sacrament of the Eucharist. Parry’s setting advances gently; allowing progress through the text and momentary reflection. Its simplicity refuses banality and singers need a key ear for intonation. God be in my head is a prayer for guidance whose words date back to a French text from around 1490. Like the other sacred texts included on this disc, it has attracted multiple settings. Parry’s is appealing and prayerful and includes much variety in its four lines without overwhelming. The Lord’s Prayer is a text many listeners will be familiar with from childhood. Parry’s response is one of his customary sympathetic homophony—its musical beauty enhanced by the careful melodic writing of the lower parts who might reasonably consider their role equally melodic as the soprano voice.

Parry’s versatility ranges from his work with King’s College, Cambridge at one extreme to The Swingle Singers at the other. As singer, music director, and arranger with this latter ensemble he toured the world and Sonnet XXVII (which was originally conceived as a cabaret song, and dedicated to his wife, Kathryn, of 30 years) picks up on many of the influences from his time with the group. It was first performed at Southwold Summer Theatre in 2011, before being revised for the National Youth Chamber Choir of Great Britain, the National Youth Jazz Orchestra and the BBC Concert Orchestra to perform in concert on BBC Radio 2. Its performance would not be out of place at the Stables Theatre, Wavendon. Indeed, the music might be more consistent with performance crafted from a lead sheet rather than a detailed score. What is unmistakably Parry, however, are the rich harmonies, the clever rhythms, and the lyricism which adorns William Shakespeare’s (1564-1616) poem.

As the light of day begins to fade, the closing tracks prepare us for the night. Parry sets the traditional Welsh song, Ay hyd y nos, which has seen many popular treatments over the years: from Haydn’s collection of Welsh songs (Hob XXXIb:9) to Peter, Paul and Mary’s adaptation of it for children. Parry’s setting was written for the Portrait Choir—with Sir Willard White as soloist—and is sung in its original Welsh to the text by John Ceiriog Hughes (1832-1887). Nunc dimittis is a canticle taken from Parry’s setting of the Evening Canticles in G major, written for Andrew Earis and the choir of St Martin-in-the-Fields. Composed in Dartington in 2011, Parry’s setting has two fascinating features: firstly, its 7/8 metre, which in unskilled hands (and voices) threatens to disrupt the gentle unfolding of the text; and, secondly, it makes clever use of a ground bass (which must surely signal Parry’s influence of Britten’s love of Purcell). Parry sets a traditional 17th-century song, Golden slumbers, which he dedicates to Wrocław Philharmonic Choir and their conductor Agnieszka Franków-Żlazny (with whom he worked in 2012). The text, 'Golden slumbers kiss your eyes, Smiles awake you when you rise', serves to dispel the anxiety of the dark of the impending night—calming and comforting, as a lullaby, in a gentle rocking manner.

Eclipse is the second of two concert pieces written for Aldeburgh Voices in 2011—the companion piece of Sun Soul. As book ends to this programme, it is this latter piece which evokes the darkness of the night which is offset by the capricious nature of the moon. Bardsley’s text illuminates the night—no longer with the sun, but now with the moon’s light. He concludes: ‘Three things cannot be long hidden: the sun, the moon, and the truth’.

And so, the disc ends with the perfectly programmed Lighten our darkness (which was written for David Clegg and the annual Gift of Sight Concert). Parry’s setting of the Third Collect recited at Evensong employs words familiar to all choral singers in the church music tradition. Rather than its unaccompanied recitation on a monotone, Parry makes use of a slowly moving accompanying texture; the text, delivered through a sometimes florid and undulating melody, interweaves with the accompanying voices. Having encountered light and darkness on this disc, through the sun and the moon, and day and night, perhaps we might pause here for a moment to reflect on the nature of truth: ‘lighten our darkness…for the love of thy only Son, our Saviour, Jesus Christ ’.

It is well documented that certain poets over the past hundred years or so have not necessarily welcomed or appreciated their words being set to music by eager composers looking for inspiring texts; I am not one of their number. Writing poetry which is specifically meant to be set to music can be a challenge, however, knowing that Ben Parry is to be the composer makes that challenge a joy. We always start with the words and the subject matter chosen usually suggests to me the poetic style, structure and possible use of meter. As a musician and singer myself, I write with specific rhythmic sequences in mind and always have an ear open to vowels and vocabulary that are ‘singable’. On occasion, I also think about musical structure and thereby form the poetic narrative to create musical movements. It is important to me that all of my poems can stand on their own, sans music, but it is when Ben takes over that I believe real magic happens. Ben has an extraordinary sensitivity to the nuance of language. His sound world captures exquisitely the atmosphere of my poems and the infinite variety of ways in which he employs imaginative voicings, accompaniments, musical and rhythmic ideas brilliantly bring to life the narratives and subtexts of each and every verse. Whatever the forces available (solo voices, a cappella choir, organ, piano or chamber orchestra accompaniment) Ben composes in technicoloured detail and always with a delicious lightness of touch. As I said, I like to think that all of my poems can stand alone but given the Parry treatment, I know that they take flight.