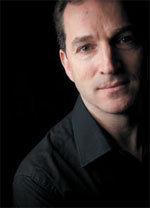 born: 25 January 1965
country: United Kingdom
Ben Parry’s compositions and arrangements include the popular Faber Carol Book and a burgeoning catalogue of choral music for Peters Edition and Oxford University Press. He has enjoyed commissions from, among others, St John’s College, Cambridge, The Cathedral Choral Society of Washington DC, VOCES8, the BBC Singers, Chelmsford, Ely, Norwich and Worcester cathedrals, and his music has been heard at the BBC Proms and on the TV and radio.

Ben studied Music and History of Art at Cambridge University, and was a member of King’s College Choir. In the mid-1980s he joined The Swingle Singers as a singer, arranger and music director, toured globally and performed with some of the world’s greatest musicians including Stephane Grappelli, Pierre Boulez and Luciano Berio. Moving to Edinburgh in 1995, he co-founded The Dunedin Consort, which has gone on to establish itself as Scotland’s premiere Baroque ensemble. He also took up posts as Director of the Scottish Chamber Orchestra Chorus, Director of Choral Music at the Royal Scottish Academy of Music and Drama and conductor of Haddo House Opera. He moved back to England in 2003, becoming Director of Music at St Paul’s School, London, then of Junior Academy at the Royal Academy of Music, and subsequently his current position as Artistic Director of the National Youth Choirs of Great Britain.

As co-director of London Voices he has performed in major concert houses around the world as well as conducting many major film soundtracks including Harry Potter, The Hobbit, and Avengers. Ben is Assistant Director of Music at King’s College, Cambridge, where he is responsible for the mixed choir, King’s Voices. He is also Music Director of Aldeburgh Voices, the resident choir at Snape Maltings in Suffolk.