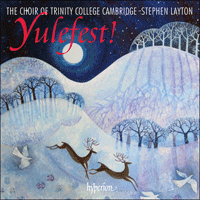 There are few choirs around today who can match the unbridled excellence of Trinity Cambridge. On this new album we find great carols both old and new. Add in some astonishing fresh arrangements and we have twenty-one tracks of pure festive indulgence—Yule love it!

‘This is a splendid and varied disc of Christmas music. The performances by the Choir of Trinity College are superb from start to finish. Not only is the singing immaculate at all times but in the more extrovert numbers the choir demonstrates a palpable sense of enjoyment. No fewer than ten members of the choir feature as soloists, often on more than one occasion. Without exception they deliver their solos marvellously’ (MusicWeb International)» More
‘A magnificent Christmas offering, a real gift from Hyperion to the Festive Season. Difficult to imagine this one being topped’ (MusicWeb International)» More
‘Simply take residence in your favourite armchair and let the vocals soothe your soul’ (Elite)» More
«Le Chœur du Trinity College de Cambridge est l'un de ces ensembles d'étudiants si versatile qu'il parvient à donner de la consistance aux pages les plus secondaires: ainsi de cette guirlande de noëls clinquante tendue entre les deux rives de l'Atlantique» (Diapason, France)» More

Besides the services we sing in our chapel during term time, besides the recording sessions out of term, besides even the music we take on tour each year, the Choir of Trinity College Cambridge has another existence, running alongside our more serious commitments. At important dates in the annual calendar, we pack into the minstrels’ gallery above the grand Trinity hall and perform a few lighter numbers: popular standards rewritten for close-harmony groups, arrangements of traditional folksongs, and—when the season calls for it—the occasional Christmas carol. It was on one of these occasions that we first performed the first piece on this album, Jingle bells, in a version by Ben Parry written for The Swingle Singers. Although it was originally intended for a smaller band of singers, we had a lot of fun doing it with a much larger choir, trying to achieve the same tightness of ensemble you get with single voices. This is an irresistibly cheeky arrangement, with abrupt changes in time signature to catch out those audiences determined to clap, or even sing along.

Silent night, though a very different piece, retains some of the same close-harmony atmosphere in this version by Jonathan Rathbone, another former Swingle Singer. We have performed some of Rathbone’s other arrangements, of tunes like ‘Joshua fought the Battle of Jericho’ which the choir sings each summer while seated on punts on the river; what makes this winter carol stand out is the rather touching key-change when the male voices enter for the second verse.

Trinity College Choir first struck up a musical relationship with the US-based Norwegian composer Ola Gjeilo when it recorded some of his religious music on the album Beyond all mortal dreams (Hyperion, CDA67832), and his arrangement of In the bleak mid-winter comes next. Gjeilo gives Gustav Holst’s well-known tune an American a cappella feel; and perhaps he nods wryly at the style of the religious minimalists as the chorus repeats the words at the end of the lines. But it is an affectionate homage; Gjeilo teases that style just as Ben Parry teases the audience who wants to clap along to Jingle bells. It’s not just choirs who have their lighter side; composers can have fun at Christmas too. Irving Berlin’s White Christmas comes next, arranged by Jeremy Davies. The original was for male voices, and can still be heard in Christmas celebrations around Cambridge; Davies’s version, rescored for full choir, has been performed on tours by various choirs as a much-loved encore. The very best time of year is one of John Rutter’s wonderful original carols, arranged thirty years ago by Robert Graham Campbell for Cambridge students to sing in close-harmony groups; for this new recording, Trinity’s junior organ scholar Owain Park returned to Rutter’s original scoring for choir and orchestra to bring some of his orchestral colours back into Graham Campbell’s adaptation. Park’s own composition, Shepherds’ cradle song, pays tribute to Rutter’s influence, alongside Herbert Howells and others in the English school of carol-writing, with its sweet tune passing skilfully from voice to voice.

Peter Gritton’s version of The Christmas song, for four-part choir, is one of the simpler arrangements of American classics on this album, not as technicolor as some others, but no less effective for its simplicity. The same is true of Erling Pedersen’s Danish treatment of the tune famously harmonized by Michael Praetorius, ‘Es ist ein Ros’ entsprungen’, rendered in English here as A great and mighty wonder. It has been interesting in compiling this album to see how different even the most well-known of Christmas songs can look in a slightly foreign setting, whether Gjeilo’s Americana take on Gustav Holst, or Pedersen’s adaptation of Praetorius, or, in the next number, Owain Park’s arrangement of Have yourself a merry little Christmas. This arrangement was written with Trinity Choir in mind, and sets the tune (made famous by Judy Garland among others) in a very different context; the harmonic twists come from a jazz idiom, and indeed from some of the other music we sing in term-time. This is a good example of how more serious music can find its way into the performance, and even the composition, of the songs we sing in a lighter mood. These different sides of the choir’s existence can’t be treated in isolation from one another, not least because some of the songs on this album have featured in our termly music: Paul Manz’s E’en so, Lord Jesus, quickly come, one of the most successful carols of the last thirty years, is a regular feature of our annual Advent carol service, which is held in the near-darkness of candlelight in Trinity College Chapel. What makes this piece so striking, and so appropriate to Advent services, is the glimmer of expectation it finds even in the darkness; the music moves from B flat minor to the relative major, D flat, in a beautifully delicate profession of hope.

James Bassi’s harmonization of a traditional Latin text, Quem pastores laudavere, sits alongside Manz’s piece as another modern American carol; and, like Manz, Bassi keeps to a relatively restrained choral texture, rarely moving out of four or five parts, and allows the very lovely tune to sing for itself. Rather different is Tomorrow shall be my dancing day, which Trinity commissioned from Owain Park for the 2013 Advent service. It is a well-known text to choral audiences—settings by Sir David Willcocks, John Gardner, Gustav Holst, John Rutter, and even Igor Stravinsky, frequently make an appearance at Christmas time. This new version is swaggering, fast, rhythmic, but not at all fussy. It is important never to lose sight of the melody. This is much easier to listen to than it is to perform.

From the fireworks of Tomorrow shall be my dancing day, the next number takes us to chilly Sweden for The virgin and child. The words and tune come from a Swedish folk song, but in this arrangement Gunnar Eriksson adds, to extraordinary harmonic effect, two Lutheran chorale lines in the alto and tenor parts to give a collision of melodies and words. This is the most extreme example on this album of how a traditional tune—sung as a solo for the first and last verses in this recording—can be seen in an utterly transformed light as the chorales open up below. The setting of Away in a manger, based on the tune of a French folk song, is an arrangement by Reginald Jacques, and (though this is not the most famous tune) isn’t a new discovery. Its simple, four-part homophony marks it out not only from The virgin and child, but also from the next number, another Swedish carol, Bror Samuelson’s Ave maris stella. There’s a monastic feeling to Samuelson’s piece, where phrases contoured as Gregorian chant are expressed in a modal, slightly unsettling harmonic language.

Bertie Rice’s gentle close-harmony arrangement of How far is it to Bethlehem? returns us briefly to the English choral tradition—and to a tune children used to sing at school. We then continue to explore the Scandinavian Christmas tradition with two more Swedish songs, The star and Peace, peace. The former is a version by Harald Sventelius, for solo soprano and choir, of a traditional folk song; the latter, with music by Gustaf Nordqvist and English words by Norman Luboff, is the best-known of these Scandinavian carols, a Swedish equivalent (perhaps) of Away in a manger. Both are quiet, simple songs, and have a strong sense of what the latter song celebrates as the ‘heavenly peace’, the stillness of the Christmas story.

As Sleigh ride begins you might be surprised to hear not the famous American tune but a passage from Vaughan Williams’s Full fathom five. This is among the more mischievous numbers on this album, another of Robert Rice’s imaginative arrangements. There is no malice intended, of course; it is a clever treatment of the tune, riding through other musical genres, taking in snippets from other popular pieces. This is a very English sort of joke, rooted in recognizing various corners of the choral repertoire; a tongue-in-cheek homage not only to Vaughan Williams (alumnus of Trinity College) but to the choirs who balance their more serious commitments with a more playful side, aiming for the highest standard in both. This is a homage also to the choral tradition that fosters and preserves the secular along with the sacred, the close-harmony Christmas songs alongside more formal carols.

O heavenly word is a Danish folk song arranged by Michael Bojesen; another simple treatment of a tune strongly associated in Denmark with Christmas, it appears here with English words taken from an Advent hymn. We draw this album to a close with another of Jonathan Rathbone’s pieces, this time not an arrangement but an original carol, The oxen. The words are Thomas Hardy’s, set by the still fireside on the turn of Christmas Eve into Christmas Day. And after all the roasting of chestnuts and riding of sleighs—good Christmas cheer as they are—this carol returns us to the more profound aspect of the season, where hope is rekindled by the birth of Jesus. Not that this hope is always obvious. Rathbone uses a rich harmonic language reminiscent of Peter Warlock to tease out Hardy’s questions and uncertainties, and to reveal beneath them a small but real hope. This carol, like Manz’s E’en so, Lord Jesus, quickly come, lies on the brink of expectation, listening to the Christmas story, ‘hoping it might be so’; the question of that phrase hangs in the air, but The oxen quietly ventures an affirmative answer. It finds again, amid the darkness of Hardy’s scene and of its own harmonic setting, a glimmer of expectation.