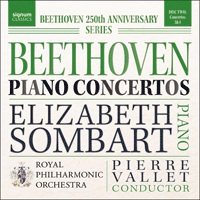 Piano Concerto No 3 in C minor Op 37
Beethoven’s unshakable belief in his musical destiny and prodigious gift for extemporisation were evident from the beginning. According to a friend of the family, his preternatural ability to create music of high quality out of thin air (as opposed to playing it off the written page) drove his alcoholic father to distraction: ‘His father would say “What, are you splashing away again? Go away or I’ll box your ears … Don’t you ever stop doing that in spite of what I have told you?”. The boy would go on playing and say to his father “But isn’t this beautiful?” His father would reply “That is another matter. You are not yet ready to play things out of your head.”’

Unhindered, Beethoven went on to become one of the great improvisers of his day. The spell he cast on audiences during impromptu salon sessions of the 1790s can be judged from piano-pedagogue Carl Czerny’s awestruck comments: ‘In whatever company he might chance to be, he knew how to produce such an effect upon every hearer, so that frequently not an eye remained dry, whilst many would break out into loud sobs … After ending an improvisation of this kind, he would burst into loud laughter and torment his hearers on the emotion he had caused in them—“You are fools!” he would say’.

Fascination with the young tyrant didn’t end there, for his appearance and general behaviour was no less volatile and unpredictable. Contemporary hostess Frau von Bernhard paints a graphic picture of what it was like to entertain Beethoven at this time: ‘He would usually stick his head round the door to make sure that no-one was present whom he disliked. He was short and insignificant-looking, with an ugly red face full of pockmarks. His hair was dark and hung almost shaggily about his face; his suit was very ordinary, and in strong contrast to the fastidious elegance customary in those days, especially in our circles. Besides, he spoke in a pronounced dialect and had a rather common way of expressing himself … his whole behaviour was unmannerly.’ Both musically and personally Beethoven was heading for a crisis, one that would eventually find release in the angst-ridden pages of the C minor piano concerto.

Although composed mostly during 1800, it was not until 1803 that the third concerto was finally complete. Even then, according to his page-turner at the premiere, Beethoven still extemporised several passages on the spur of the moment: ‘I saw almost nothing but empty leaves; at the most, on one page or another, a few Egyptian hieroglyphs, wholly unintelligible to me, but scribbled down as clues for him; he played nearly the whole solo part from memory, since, as was so often the case, he hadn’t had time to put it all down on paper.’ This was part of a mammoth historic concert held on 5 April that included premieres of the oratorio Christ on the Mount of Olives and the second symphony.

The third concerto is a far more ambitious work than its two predecessors, its minor tonality often unleashing the rugged, turbulent side of Beethoven’s indomitable creative personality. The outer movements are brimful of high drama and tension, tellingly offset by the tender reflectiveness of a central Largo.

To our contemporary ears, well accustomed to Beethoven’s tempestuous outbursts, there may not appear to be anything so terribly radical about this music. Yet at the time, it was experienced as a series of shattering musical body-blows, signalling a radical departure from the post-Mozartian Classicism of the first two concertos towards new realms of expressive intensity. There is a symphonic grandeur to this music that is utterly opposed to the virtuoso note-spinners of Beethoven’s immediate contemporaries. To cap it all, he unprecedently introduces a fugal passage for the string section during the concerto’s finale—Brahms, in homage, repeats the trick in his epic first piano concerto of 1858. Back in 1803, neither the critics nor the general public really understood what Beethoven was up to—but with the ‘Eroica’ symphony waiting just around the corner, this was only the beginning.

Piano Concerto No 4 in G major Op 58
In the six years that separate the elysian G major concerto from the ‘sturm und drang’ machismo of its predecessor, Beethoven had matured as a composer beyond all recognition. Whereas previously his music inclined towards pushing Classical self-containment to its outer limits, he was now evolving new ways of employing Classical principles as a springboard for his burgeoning creative imagination. This fresh outlook is evident throughout the fourth concerto, which while outwardly brilliant in parts, is tempered by a temporal wisdom that shuns the attention-seeking shock tactics of his turn-of-the-century style. It is every bit as revolutionary in content, yet is expressed with a creative ease that transports the listener to previously unimagined worlds of musical expression.

If Beethoven’s music had become transcendental in quality, his personal life was as unstable as ever. During this period, he fell hopelessly and impractically in love with a succession of attractive women, several of them society piano pupils. He was not the most beguiling of men with his stocky build, pockmarked features and ruddy complexion. His mood-swings could be quite violent at times, and his facial expressions hard to read due to his encroaching deafness and resulting insularity. His relationships with both sexes tended to be turbulent, ranging from idealised adulation one minute to wild rejection the next.

One mystery remains unexplained, however—the identity of Beethoven’s so-called ‘immortal beloved’. He was completely intoxicated by her, as this extract from an untitled letter found in a secret drawer in his composing desk clearly shows: ‘My angel, my all, my very self—a few words only today, and in pencil (thine). Why such profound sorrow, when necessity speaks? Can our love endure only through sacrifice—but through not demanding all, canst thou alter it that thou art not wholly mine, I not wholly thine?’ One of the most likely candidates is Antonie Brentano, a married woman ten years younger than Beethoven, to whom he became very close during the composition of the fourth concerto, and to whose son, Maximiliane, the life-enhancing Op 109 piano sonata was later dedicated.

Musically speaking, Beethoven’s ceaseless struggles with form and content continued unabated. Having spent an enormous amount of time and effort on his only opera Fidelio, money was running short. An epic concert was therefore hastily arranged for 22 December 1808 at the Theater an der Wien in Vienna, at which the premieres of the fifth and sixth symphonies, fourth piano concerto, parts of the C major Mass and Choral Fantasy were to be given.

In the event, none of these highly demanding and complex scores were adequately rehearsed. It was a freezing night, and after several hours the whole thing ground virtually to a halt with the first performance of the Choral Fantasy. A review in a local journal gives something of the flavour of the occasion: ‘The clarinets made a mistake in their counting and entered too soon. A curious mixture of harmonies resulted. Beethoven jumped up trying to silence the clarinets, but didn’t succeed until he had called out quite loudly and rather irritably: “Stop, stop! That won’t do! Again—again!".’ Such were the circumstances under which one of the greatest of all concertos was premiered.

Composed between 1805 and 1806 and dedicated to one of Beethoven’s most supportive patrons, Archduke Rudolph of Austria, the fourth concerto flouts convention at virtually every turn. The opening—Mozart plays a similar trick in his K271 piano concerto—brings one of the greatest surprises of all, with its calm, simple statement of the main thematic material announced by the soloist alone. The orchestra then steals in quietly, not in the home tonic of G (at least not to start with), but in the remote key of B major. Another striking feature of these opening bars is their rhythmic similarity to the insistent opening quavers of the fifth symphony. It therefore comes as no surprise to learn that sketches for these two masterworks appear together in Beethoven’s sketch books, yet to startlingly different affect.

The brief central Andante con moto consists of a haunting dialogue between piano and strings, throughout which the soloist attempts to pacify its orchestral partners by the quietest and subtlest of means. Franz Liszt, rather fancifully, likened this groundbreaking movement to the story of Orpheus taming the beasts of the underworld.

The Rondo finale follows (again quietly) without a break. One of Beethoven’s most invigorating creations, an overwhelming sense of well-being surges through this music as though the composer had excitedly rediscovered the joy of life itself. The jubilant coda finds him almost falling over himself in his excitement to get to the end.