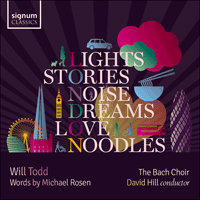 This new album of accessible choral works has at its heart a new cantata commissioned by The Bach Choir as part of its outreach to children programme. Adults and kids alike respond with enthusiasm to this collaboration between composer Will Todd and poet Michael Rosen.

Songs of magical creatures
This short suite sets three sections of ‘magical poetry’, one from The Tempest and two from A Midsummer Night’s Dream. The music for ‘Fairy song’ takes its inspiration from the fizzing energy of the spirit (First Fairie) as she describes her magical existence. The second setting is the famous ‘Full fathom five’, used brilliantly by many composers over the years but still a delight to set. In the final movement we hear Puck’s reflections at the end of A Midsummer Night’s Dream, before a return of the fizzing energy of the first movement brings the suite to a close. The composer writes:

I grew up in a household full of Shakespeare due to the fact that my father Derek Todd taught English Literature at Durham University and had a passion for all things Shakespearean! I have particularly fond memories of attending student productions on the river banks in Durham and experiencing the magic of the stories and language as we sat transfixed in the May dusk (huddled in blankets). Those experiences definitely helped to amplify the magical and supernatural/mythical themes that Shakespeare often weaves into the narratives of his plays.

Lights, Stories, Noise, Dreams, Love and Noodles
Lights, Stories, Noise, Dreams, Love and Noodles is a collaboration between composer Will Todd and one of the UK’s most celebrated children’s authors Michael Rosen. Commissioned by The Bach Choir in 2015, Michael Rosen describes this 25-minute cantata as 'echoes, memories, pictures and sounds of a city: and the words and music that spring from it all'. Will Todd writes:

Working with Michael was a joyous and inspirational experience. I began by using some of Michael’s existing poems, sometimes blending fragments of several works (such as in ‘Noise’). Then he and I worked together to create other parts, notably ‘Love’, ‘Dreams’ and ‘Stories’. The ‘Prologue’ and ‘Epilogue’ texts are taken from another pre-exisiting Michael Rosen poem. Thank you Michael for being so fun.

The work was first performed at Westminster Central Methodist Hall on 17 June 2016, conducted by David Hill and performed with The Young Singers—a children’s choir formed in partnership with The Bach Choir and the Tri-Borough Music Hub for children of years 4 to 6.

Kites, Cards and Constellations
The choral suite Kites, Cards and Constellations was commissioned by the Blanco family for the tenth Anniversary of Mark Blanco’s death. The work was first performed by St Martin’s Voices with Will Todd at Westminster Cathedral Hall as part of a celebration of Mark’s life and a reflection of the last ten years in 2016. Will Todd writes:

I worked with Mark Blanco’s mother Sheila (a tireless advocate for justice in the tragic case of her son’s death) to try and find a way to express something about the life of Mark (who I never knew). Sheila gave me lots of great anecdotes and stories and also supplied some reminiscences of Mark’s friends and family. Gradually as I mixed these ideas up the final text emerged as a tribute to Mark. In the premiere performance I added a live improvisation. I have now transcribed this and added it as the third section: 'Memories'.