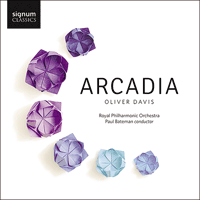 Six new works from the toe-tappingly infectious Oliver Davis, this time the familiar piano/violin plus strings-based melodies and rhythms sharing the stage with a new work exploring the possibilities of a piano/viola/recorder/tuba quartet.

‘Oliver Davis (b1972) writes music that is easy on the ears, full of warm harmonies and buyant rhythms … Kerenza Peacock's soaring solo [in Gemini] is especially sumptuous, and she shines again in the folk fiddle-inspired second movement’ (BBC Music Magazine)

The infinite ocean was composed for choreographer Edwaard Liang and was commissioned by San Francisco Ballet for the Unbound festival, 2018. Liang requested the work to be in six sections and to feature a solo violin. The opening section was to be an ensemble piece. After a graceful introduction, the solo violin enters playing a very fast arpeggiated figure which, despite its virtuosic feel, is actually accompanying the first violins’ melody. Only after this section does the solo violin take centre stage. The second section is a Pas de Deux, for which I wanted to create a very serene movement following the intensity of the opening. The third section was to feature male solos, hence the use of brass and percussion. Following this is a duet, where I used woodwind and pizzicato strings to create a lighter feel. The fourth section pushes forward rhythmically and is an ensemble piece for the dancers. In the fifth section Liang wished to have a second Pas de Deux but this time the duet would be more sombre and reflective in mood. The ballet finishes with a full cast ensemble piece which I wrote using a rhythmic ostinato figure ending in a climactic crescendo. Edwaard Liang’s vision is inspiring and I found the project very exciting. The soloist, Ben Baker, performed the recording on a violin by Carlo Tononi.

My aim when writing Arcadia was to create a piece which evoked an idyllic serene place. I considered writing an orchestral accompaniment to the solo piano part but decided that the piece’s charm lay in its simplicity. It is performed by Huw Watkins.

Gemini is a two-movement work for violin and strings and was written for violinist Kerenza Peacock. I wanted to explore some of the contrasting styles of Kerenza’s playing. The first movement has slow legato passages for solo violin which make use of Kerenza’s ability to draw a haunting sound from the instrument. The second movement reflects her ability to play folk style fiddle, but with a virtuosic twist.

Suite for piano and orchestra was written for Huw Watkins. The first movement opens with a solo piano passage, the theme of which is later quoted in the following allegro section. I used the opening piano melody in the brief slow movement to create the main theme for the last movement, which has a playful character.

Inferno was originally written as a short orchestral sketch. I subsequently revisited this anarchic piece and expanded the sketch into a single movement piece whilst adding a solo violin part, performed here by Kerenza Peacock.

In Spring 2018 I was approached by the Hanke Brothers who commissioned me to write a work on the theme of the four elements. The ensemble consists of piano, viola, recorder and tuba, a rare combination which results in a truly unique timbre. In Air, I used piano arpeggios in a relatively high register combined with a repetitive rhythmic pattern on the recorder part to convey a light, airborne feel. Water has a slower, more legato, flowing melody which is played by the tuba, viola and recorder, accompanied by the piano. To depict the flames of Fire, I indicated in the score to strum the strings of the piano in an upwards glissando. This was combined with a minor trill in the violin whilst the viola plays pizzicato. With Earth, I wanted to create a more grounded feel so anchored the music with long pedal notes in the tuba and used a repeated rhythmic pattern in the viola to propel the music towards its climactic ending. The Hanke Brothers premiered The Elements in Stuttgart on 14 July 2018 and recorded the work the following month at the Alte Zigarrenfabrik studios, Germany.