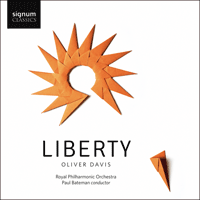 Frequent composer of choice for the ballet companies of the world, Oliver Davis presents a further album of his pulsating works for strings and piano alongside a mesmerizing setting of words by Mary Coleridge featuring multiple Grace Davidsons.

While I was writing this album the co-producer, Emma Heathcote, suggested ‘Liberty’ as a title. It occurred to me that since I was enjoying the freedom to write whatever I wished ‘Liberty’ was an appropriate choice.

Spiral is written for solo violin, piano and strings. The opening movement is scored so that the solo violin is often part of the string section, but then emerges in certain sections to reveal itself as a solo instrument. The name of the work comes from the image evoked by the solo violin and piano lines in the second movement. The third movement provides a welcome sense of calm after the energy of the first two movements and the final movement often exploits Kerenza’s ability to play in a folky, virtuosic style. Kerenza recorded this work on a Peter Guarneri violin kindly loaned by Ingles & Hayday.

In August 2017 I travelled to Malta to watch three brilliant ballets choreographed by Royal Ballet First Artist Erico Montes. In the apartment where I stayed was a bust of Bacchus, the God of Wine. My co-producer suggested I write a piece called Bacchus and fill it with merriment and mischief. On my return to the UK I had fun writing this pizzicato piece for strings.

I first worked with cellist Katherine Jenkinson in 2016 when she asked if I would write a piece for cello and piano for a forthcoming concert. Following this I wanted to write more for the cello so commenced work on Morpheus, a cello concerto for Katherine. For the first movement she suggested I make use of the powerful, brilliant high register that the cello has. The second movement is written around a 12-note sequence which varies only slightly throughout the movement. I wrote the solo cello part to ‘float’ over this sequence. The last movement has a driving intensity, with repeated triplet passages providing momentum. For this recording the Royal Academy of Music kindly loaned Katherine a Rogeri cello.

Liberty is written for violin, viola, piano and strings and is in two distinct parts. In the opening section I wanted a graceful feel that allowed the soloists to each have their own space to perform. It is followed by the fast, almost rustic feel of the second section where I often score the violin and viola in octave unison which allows their theme to be heard even when the full string section are playing at forte.

Lost Lake was written for Jonathan Hill in 2011. In fact it was the first piece I wrote for violin and strings. The fiendish virtuosic middle section is sandwiched between the outer more serene legato passages. Despite its demands upon the soloist, it remains the most performed work of my repertoire. Following Lost Lake is Sonar, where rippling piano lines and long legato phrases conjure up images of an underwater world.

Whilst searching for a text to set to music I discovered Chillingham, three poems by Mary Elizabeth Coleridge. I was immediately attracted by the mystical quality of her writing. I composed these songs for soprano Grace Davidson, who performs all three vocal lines on this recording.