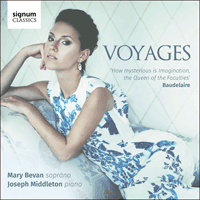 Enter a world of beauty, mystery, love, and extraordinary landscape in the company of Debussy, Duparc, Chabrier, Bréville, Séverac, Fauré, Rollinat and Schubert.

‘The exquisite way she floats the high-lying refrains of Rollinat’s ‘Le jet d’eau’ is simply breathtaking … Middleton, as one might expect, is marvellously insightful … it’s all most beautifully done’ (Gramophone)

What are we hearing when we listen to a French song? Composers find and choose texts in different ways. Sometimes there is something about a particular poet’s work which captures their imagination. It makes a composer need to set that poem to music. It may not be because the poem is particularly ‘musical’. Instead, it is often something within the language in the poem which means that the poet’s words can unlock a composer’s voice.

For Henri Duparc (1848-1933), the poet who unlocked his own voice was Charles Baudelaire (1821-1867). Setting L’Invitation au voyage to music in 1870 marked a pivotal moment not only in Duparc’s career as a composer, but in the whole destiny of the French song repertoire known as mélodie. In summer 1870, France became embroiled in a war with Prussia, which served in some way as a prompt to young generations of composers seeking creative ways to promote French music using recent French poetry. This was the same year that Gabriel Fauré (1845-1924) set Baudelaire poems with ‘musical’ titles, Chant d’automne and Hymne. Duparc’s response to Baudelaire’s call to travel is quite different from Emmanuel Chabrier’s (1841-1894) which also dates from 1870. Chabrier had a different vision for the work, using a wider soundscape which included an obbligato bassoon alongside the piano and voice. That the same poem had captured the imagination of two young composers shows how Baudelaire was able to inspire them in different ways.

Baudelaire himself promoted the idea of using imagination creatively. He called the imagination 'la Reine des facultés' ('the Queen of the Faculties'). Baudelaire conjured up women in far-off lands, amazing sunsets, and enticing Wanderlust through his poetry. Encouraging your mind to wander off, to travel somewhere (it doesn’t matter where) meant that Baudelaire knew how to dream of attaining perfection somewhere, somehow. In Johann Wolfgang von Goethe’s (1749-1832) world, this meant Mignon’s song Kennst du das Land (famously set by Schubert) which invites the poet to imagine a perfect land—far off—where he can live out his days in the company of his lover. Belgian poet Victor Wilder (1835-1892) adapts Mignon’s song set by Duparc as Romance. Other Mignon songs such as Nur wer die Sehnsucht kennt reinforce the idea of love tinged with loneliness and longing. Théophile Gautier (1811-1872) used the same Mignon figure in his 1838 collection La Comédie de la mort from which Hector Berlioz (1803–1869) drew his texts for Les nuits d’été. The Mignon myth is a highly evocative ideal of alluring women and exotic voyages to which poets and composers cannot help but be repeatedly drawn.

In Baudelaire’s world, it doesn’t matter which woman you imagine going places with. A number of women inspired his work—from the Haitian-born actress Jeanne Duval (painted by Edouard Manet), to Apollonie Sabatier who hosted salons frequented by all the poets and artists of the day (painted by Vincent Vidal), as well as his mother Caroline Dufaÿs with whom he enjoyed a fractious relationship after her remarriage to Général Aupick.

The different relationships Baudelaire enjoyed with these women—who served variously as his muse—created different poetic worlds. From the sensual Le jet d’eau ('The Fountain') to the reverent Hymne and the nostalgic La vie antérieure ('A past life'), we encounter enticing imaginative settings. But there is perhaps none more enticing than the one which combines all of these sensual, reverent, and nostalgic elements. Harmonie du soir ('Evening harmony') brings everything together in a way which also interweaves music and religion. It is an unusual text—one which is hard to perform because it has no obvious characters in it. It requires singers to imagine themselves in a place or space rather than playing the role of a person within it. The text turns in on itself, and repeats lines of text from one stanza to the next. We hear melancholy waltzes, smell heavily perfumed flowers, and see glittering religious artefacts. Nostalgia predominates as the poet calls out in an attempt to reclaim now-faded glories. It is a poem in which it is hard to locate yourself, and with which many singers struggle to connect. There is no single way to interpret the poem, but it can be helpful to think of it as perhaps evoking the famous Parisian church in which Baudelaire was baptized, Delacroix painted some important frescoes, and—in more recent times—Dan Brown set parts of the Da Vinci Code: Saint-Sulpice. In listening to three very different responses to the same poem—by Pierre de Bréville, Claude Debussy, and Maurice Rollinat—we hear soundscapes from the mundane to the ethereal, from the cabaret to the cathedral. The same 16-line poem has inspired composers in extremely inventive ways.

If so many composers were setting Baudelaire to music in the 1870s through to the early twentieth century, we might ask what connects them besides the choice of poet. Some of the composers whose names are less well-known today trained under famous composers such as César Franck or Vincent d’Indy, including Pierre de Bréville (1861-1949) and Déodat de Sévérac (1872-1921). Others had little or no formal musical training, such as Maurice Rollinat (1846-1903) who was a poet who also performed at the famous Chat Noir cabaret, self-accompanying at the piano as he sang his Baudelaire songs. It was Paris which served as the central hub for these composers.

The most French famous composer on this album, Claude Debussy (1862-1918) merits special attention for his unusual interaction with Baudelaire. Published in an 'édition de luxe' in 1890, the Cinq poèmes de Baudelaire enjoyed an initial print run of only 150 copies. The scores were sold at the exclusive Librairie de l’Art Indépendant, based on the Rue de la Chaussée d’Antin in Paris. The first performance was in private, at Ernest Chausson’s house, attended by a small number of illustrious artists of the day including composer Paul Vidal, author Catulle Mendès, and music critic Henri Gauthiers-Villars. Yet the first public performance was not until 1903 in Lyon, and it took a while for these songs to enter the repertoire. Even today, these songs remain ones which are not the most amenable for singers, pianists, or audiences alike. If Baudelaire’s poetry was able to unlock Duparc’s voice as a composer, for Debussy, Baudelaire’s texts marked a chapter in his musical career en route to finding his distinctive voice. These songs are Debussy, but they are a Debussy suffused with Wagner. This was a period in which Debussy was absorbing the work of the German opera composer who had inspired Baudelaire to write a significant article in praise of Wagner’s work after the disastrous performance of Tannhäuser at the Opéra de Paris in 1861 when the audience reacted badly to a musical work which did not fit their expectations. Debussy’s Baudelaire set also does not conform to expectations. There is no overt coherence to the set, either in the choice of poetic texts (which all use different poetic forms and themes), or in the musical language (there are no clear key relationships or repeated motifs between songs). The set does not offer a narrative arc, and many of the songs are performed individually by singers today rather than as a full set. Le balcon, Harmonie du soir, Le jet d’eau, Recueillement ('Meditation'), and La mort des amants ('The death of lovers') weave between large-canvas drama and quiet introspection. We hear echoes of fond memories, voluptuous baisers infinis (infinite kisses), feelings of sadness and regret, and impossible love stories; at the same time, subtle citations from Parsifal and Tristan are interwoven with Debussy’s expanded chromatic palette. The whole set is a rejection of the obvious. Baudelaire and Debussy make us work hard to read and hear between all the lines of music and text which mask and reveal different truths.

It is no surprise that Baudelaire called his collection Les fleurs du mal ('The flowers of evil'). He privileged the things that most in polite society would deem unacceptable. He wrote about prostitutes as much as he wrote about goddesses. He promoted music that most French audiences at the time rejected. He was a man with a chequered career, enjoying limited success during his own lifetime, and enduring a trial in 1857 when the public prosecutor decided to censor his first major poetry publication. Baudelaire received a hefty fine, and had to remove six poems from all printed copies of Les fleurs du mal because they were deemed too erotic for public taste. It prompted him to write more poems, to re-issue a larger edition of Les fleurs du mal in 1861. But by 1867 his health was seriously failing, and he died in Paris from syphilis-related illnesses 150 years ago, on 31 August 1867.

The idea for this disc came about a couple of years ago when Joseph Middleton contacted me about a live recital for a BBC broadcast. He had constructed a programme exploring the genius of Baudelaire and Goethe and how texts by them unlocked very specific musical landscapes in settings by Debussy, Duparc, Chausson, de Bréville, Séverac, Fauré and Schubert. After our first performance we both felt unable to let go of the programme and began exploring the possibility of recording it. As we began to put this plan into action we got in touch with Helen Abbott, a professor at the University of Birmingham and an expert on Baudelaire. In discussions with her we found a common link in these songs; the enigmatic waif Mignon who first appears in Goethe’s work Wilhelm Meisters Lehrjahrer (1795-6) and who subsequently proved to be the inspiration for many artists and poets. She symbolizes humanity’s two natures—earthly and spiritual, male and female—and her life is governed by Sehnsucht, or ‘longing’, a form of Romantic desire that manifests itself as affliction. Her wish for a better life, one only possible in her imagination, finds a common thread in the poetry of Baudelaire for whom imagination reigned as the queen of the faculties.

I’d had the opportunity to sing quite a bit of French song (and some of the Baudelaire repertoire) before, but this was the first time I felt we were able to tie this kind of programme together around a bigger story. Working with Joseph and Helen on the poems in depth really opened up the music: scenes and images started to take shape in my mind. My own imagination is something I have always relied upon heavily in order to create different atmospheres and tell stories on the recital platform. Recording the disc in a bitterly cold but evocative church in North London seemed somehow very fitting for the tales of beauty, mystery, love, and extraordinary voyages that these songs recount.