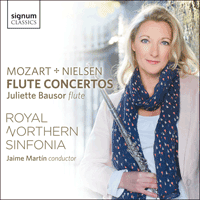 Widely recognized as one of Britain’s leading flute players, Juliette Bausor is principal flute in the London Philharmonic Orchestra, and has played guest principal with other orchestras all over Britain. This is her debut concerto recording and present a much-loved work by Mozart along with Carl Nielsen's epic battle between flute and bass trombone.

It seems to be accepted that Mozart did not like the flute, but his complaints to his father about “an instrument I cannot bear” were made at a time when he was struggling to meet the terms of a commission. His remark may well be interpreted as subjective—a feeble, childish excuse for having been dilatory. More significantly, he had fallen in love with Aloysia Weber, so composing must have seemed an unwanted distraction and quite possibly more irksome than usual. Certainly there is no scrap of evidence in Mozart’s actual music for the flute—whether as a solo instrument or as part of a woodwind section—to suggest any antipathy or even lack of interest. Indeed, in common with his treatment of all the woodwind family, his flute writing is gloriously idiomatic. How impoverished would the flautist’s repertoire be without Mozart’s delightful works?

While in Mannheim during the winter of 1777-8 Mozart met the distinguished doctor and amateur flautist Ferdinand Dejean. In correspondence Mozart spells his name in different ways and sometimes refers to him as “our Indian” or “the Indian Dutchman” because of his service in the Dutch East India Company. According to a letter Mozart wrote to his father, this wealthy Dutchman commissioned him to compose “three modest, simple, and short concertos and a couple of quartets for the flute”. There are differing accounts of the actual number of compositions which Dejean commissioned but clearly Mozart never managed to write all the concertos. A dispute arose, Mozart claiming that he had not been paid the agreed sum of money, while Dejean was left short of the expected number of pieces. It was believed that, because he was pressed for time, Mozart made an arrangement of his oboe concerto to serve as one of two flute concertos which he did provide, but more recent scholarship has suggested that this flute version may have been prepared by someone else. The Flute Concerto No 1 in G major dates from February 1778. Its opening Allegro maestoso begins with a theme employing a favourite rhythm of Mozart’s. In 1784 he would begin three consecutive piano concertos—K453, K456 and K459—with this same rhythm, though each time he establishes a quite different character. Here in the flute concerto this rhythm contributes to a certain nobility. This opening sonata-form movement has the usual two principal themes, the second of which begins in E minor. Regarding Mozart’s writing for the flute, there are phrases which require good breath control—as do the quite frequent leaps between low and high registers—but the little breathing spaces show the composer’s typically professional consideration. In the orchestra the horns have moments of prominence, while the second violins have engaging passages of busy figuration. The robust development section, which spends much of its time in minor keys, is followed by a recapitulation with a few modifications of the original material, and a cadenza. In the beautiful central movement, also in sonata form, Mozart replaces his two oboes with a pair of flutes, as he had already done in the equivalent movement, in the same key, of his Violin Concerto No 3. The strings are muted while the horns often play in a lower register, so that the orchestral colour is rather soft, mellow and darker than previously. The very opening bar returns like a refrain at each structurally important point. Mozart’s writing for the flute is effectively a rich arioso and again the second violins have an unusually soloistic part with several passages of flowing demisemiquavers. Mozart ends as he had done in his Bassoon Concerto and Violin Concerto No 5, with an extended minuet-style finale. Here elegance is combined with virtuosity and a high level of invention. Especially in the contrasting episodes (one of them in E minor) in this rondo structure Mozart’s abundant melodic gift seems effortless and inexhaustible. As in the opening movement, wide leaps often enhance the flute’s melodic line. Sadly, the attractions of Mozart’s concertos for flute—and for the bassoon—tend to be generally undervalued, overshadowed by the glories of the many wonderful piano concertos, the Clarinet Concerto, the Sinfonia Concertante and the last three violin concertos. As Mozart composed a tremendous number of masterworks in his short but prolific creative life, not all of them receive the attention they deserve.

The origin of Mozart’s Andante for flute and orchestra in C major, K315 has been the subject of debate. Two dates have been suggested—the winter of 1777 or early spring 1779—while the motivation for its composition is unclear. After the briefest of introductions, unusually scored for pizzicato strings with oboes and horns, the flute begins a lyrical, sustained arioso, which continues with the second theme in G major. In character the melodic material anticipates The Magic Flute of more than ten years later. Following a brief central quasi-development episode which passes through G minor and D minor, Mozart enhances the recapitulation with little variants in the transition and the second theme. The opening pizzicato tutti returns several times throughout as a kind of punctuating landmark. A cadenza and a brief coda conclude this gem of a piece.

Mozart originally composed the Rondo in C major, K373 for violin and orchestra in April 1781. One of the last concerts he gave in his native Salzburg, a city he had grown to detest, included this amiable composition, with its solo part of beautifully varied figuration and no special virtuosity. By June of that year he had moved to Vienna, where he was feted for a while, but as he had been warned by Count d’Arco, “… after a few months the Viennese want something new.” The soloist in the premiere of the Rondo in C major was the leader of the Salzburg Court Orchestra, Antonio Brunetti, who certainly played all of Mozart’s violin concertos although the composer had written them all for himself to play initially. The Rondo is marked Allegretto grazioso and has a principal theme of conventional elegance, but the alternating episodes provide marked contrast. Two of these visit minor keys, the first beginning in A minor and characterised by wide leaps in the solo violin, the second (in C minor) enhanced by a rich accompaniment including pizzicato violins. The quiet ending, taking the soloist to its highest note in the piece C, more than an octave above the stave, is delightfully unexpected. The quite commonly played arrangement in D major for flute—not by Mozart—appeared after his death. On this recording the work is played in an edition by Dieter Sonntag.

Although his main instrument was the violin, Nielsen, like Mozart, was gifted with an extraordinary feeling for the distinctive character of each woodwind instrument. This is especially evident not only in the Wind Quintet, the Clarinet Concerto and Flute Concerto (arguably two of the greatest 20th century concertos for any instrument) but also in his mature symphonies. The delightful, woodwind-based Poco allegretto in No 4 and the desolate clarinet solo in No 5 are among the most striking examples. Having met and befriended the members of the Copenhagen Wind Quintet in 1921, Nielsen wrote his Wind Quintet for them the following year. He planned to also write a concerto for every player, evoking each of their individual characters—rather as Elgar had created miniature portraits of his friends in his Enigma Variations. Nielsen suffered from heart disease in his last years and after a series of heart attacks he died in October 1931, having completed only two of the planned concertos—for flute (1926) and clarinet (1928).

In the finale of his Wind Quintet Nielsen had already evoked, in successive variations, the character of each member of the Copenhagen ensemble, but in his two late concertos he takes this idea a stage further, composing an entire major work around the personality and performing style of a particular player. The Flute Concerto is effectively a tribute to the fastidious temperament of Holger Gilbert Jespersen, who by now had replaced Paul Hagemann in the Copenhagen quintet.

Profoundly original in his symphonies, Nielsen was equally so in his three concertos (the other is for violin), dispensing with the traditional three-movement form in each one. The Flute Concerto opens resolutely (Allegro moderato), immediately establishing the kind of keyconflict which is so often a feature of Nielsen’s major works. Here E flat in the bass is pitted against the prevailing D minor, but this is not merely a momentary conflict, as throughout much of this movement Nielsen seems to be searching for the stability of a “home” key. With the flute’s entry the character of the music becomes less severe, more lyrical. The second theme, on violins, oboes and bassoons, reinforces this warmer, more expressive mood, before a brief but turbulent passage for solo flute, clarinet and first violins. A strenuous orchestral passage leads to the most unlikely emergence of the bass trombone as a soloist (espressivo), accompanied by fortissimo timpani and immediately heckled by the solo flute (the fastidious, outraged Jespersen). A serene, expansive new melody on the flute (important later in the work) leads to three short cadenzas, the second of which begins above a timpani roll, then becomes a duet with clarinet (with a little bassoon support). This movement ends in tranquility.

The Allegretto second movement opens with a jaggedly rhythmic passage in the strings, which gives way to a gentle and graceful melody for the soloist. After a few bars of rallentando (tranquillo) the tempo changes for a slow episode (Adagio ma non troppo) in which the flute introduces a deeply poignant melody. This melody is subsequently intensified (fortissimo above tremolo strings) before a return to the original tempo brings a reprise of the graceful theme, incorporating a little trio for flute, horn and solo viola. A big crescendo prompts a reference to the opening jagged rhythm and a further intense recall of the Adagio theme. Now a charming Tempo di Marcia transformation of the graceful melody, now in 6/8, on woodwind, then strings, then solo flute, provokes agitated passage-work in the strings. When this calms down the bass trombone, silent for so long, re-enters fortissimo to expose the close relationship between the graceful melody and the expansive flute melody from the first movement. Leaving this discovery to the gauche, unsophisticated bass trombone, rather than to the more refined flute, is one of Nielsen’s wittiest inspirations, while a fortissimo duet between flute and timpani is another instance of his ever-imaginative combinations of instruments. The bass trombone also accidentally lands in E major, the key for which the music seems to have been searching, and flavours the last few bars with joyful glissandi, like a hippo in the mud.