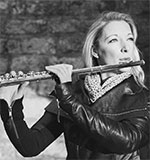 Following early recognition in competitions, including reaching the televised concerto final of the BBC Young Musician of the Year and winning the gold medal in both the Shell LSO Competition and Royal Over-Seas League Competition, Juliette has appeared as a concerto soloist with orchestras such as the London Symphony Orchestra, Ulster Orchestra, Academy of St Martins in the Fields, European Union Chamber Orchestra, Royal Northern Sinfonia and London Mozart Players, with conductors including Yannick Nézet-Séguin, Thomas Zehetmair, Mario Venzago and Sir Neville Marriner. Success on an international scale is reflected in tours around Europe and beyond, to Japan, Thailand, Vietnam, the United Arab Emirates, Namibia, Zimbabwe, Australia and New Zealand.

Juliette is a member of the celebrated chamber group Ensemble 360, resident at the Crucible in Sheffield. In addition to the Ensemble’s busy concert schedule, Juliette is regularly invited to give recitals at major venues and festivals throughout the UK, including frequent Wigmore Hall and South Bank appearances, and performances at the Edinburgh, Cheltenham and Aldeburgh International Festivals and BBC Proms. Juliette has collaborated with many other leading chamber musicians, including Thomas Zehetmair (violin), Llŷr Williams (piano), Kate Royal (soprano), Anneleen Lenaerts and Catrin Finch (harp), as well as the Coull, Elias, Badke, Carducci and Edinburgh String Quartets.

Juliette was appointed as Principal Flute in the London Philharmonic Orchestra, having previously held the Principal Flute position with Royal Northern Sinfonia for over ten years. She also holds the position of Principal Flute with London Mozart Players and frequently appears as a guest principal with orchestras all over Britain, including Philharmonia, BBC National Orchestra of Wales, Scottish Chamber Orchestra, London Sinfonietta and Britten Sinfonia.