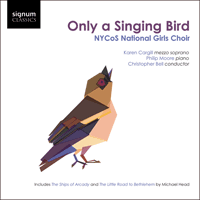 Only a Singing Bird

A beautiful collection of songs featuring Michael Head’s best-known works, The ships of Arcady and The little road to Bethlehem, as well as the beautifully conceived song-cycle Snowbirds. NYCoS National Girls Choir is joined by its patron and world renowned mezzo soprano, Karen Cargill for this moving album.

'A fruitful vehicle for showcasing what the Girls Choir of the National Youth Choir of Scotland is capable of. What’s striking is how evenly matched in quality the different voice parts are when they divide in the more complex writing … all this betokens preparation of the highest quality, for which NYCoS artistic director Christopher Bell, whose conducting is exemplary”’ (BBC Music Magazine)
'The CD reveals a meticulously integrated choir of mature abilities characterised by tonal delicacy and textual expressiveness' (Choir & Organ)» More

'There are the beautifully crafted, soft-scented songs that make up the choral cantata Snowbirds, featuring guest soloist Karen Cargill, whose golden mezzo soprano hovers exquisitely above the creamy blend of the girls’ voices, notably in the mellifluous Love Offerings. Bell draws sustained precision and endless expressive range from his choristers in other Head songs' (The Scotsman)

It is only just over a century ago that young amateur choirs began to gain a repertoire that might be performed without embarrassment. Gustav Holst, who was not only composer of The Planets but also a major pioneer of school music, once wrote in despair to a friend: ‘I find the question of getting music for girls’ schools perfectly hopeless. I get reams of twaddle sent me periodically, and that is all the publishers seem to think is suitable for girls.’

Such was the situation he faced in the decade or so before the outbreak of World War I. To an extent, Holst’s former teacher Charles Villiers Stanford was attempting to improve the standard of school music through the publication in 1906 of a New National Song Book a volume which was successful enough to go through several editions even through World War II and the 1950s. This contained, apart from an assortment of rounds and ‘folk songs’ (in fact much divorced from the authentic folk song tradition then being discovered by Cecil Sharp), many songs of the sea, a reflection of Britain’s much celebrated naval reputation. It’s not so surprising, then, that on this album the earliest song in terms of composition is ‘The ships of Arcady’, originally composed during World War I by Michael Head (1900-76).

As a teenager Head had been rejected for military service, and so had started working in a munitions factory. It was during that time that he composed his first collection of solo songs, Over the Rim of the Moon settings of poems by the Irishman Francis Ledwidge (himself killed at Ypres in 1917) including ‘The ships of Arcady’. This collection became Head’s first published work (by Boosey & Hawkes) in 1919. That year he began composition studies with John Ireland and in September 1919 joined the Royal Academy of Music as the Sir Michael Costa Scholar for composition.

Other songs followed, including the collection Songs of Fantasy published in 1920, from which ‘A Funny fellow’ is taken. Head himself gained some fame as a singer, giving his first public recital at the Wigmore Hall in 1929, singing while accompanying himself at the piano! In all he composed around 124 songs, several of which gained even greater currency when arranged for choir, including ‘The ships of Arcady’. By far the most often performed and recorded of Head’s works by choirs is ‘The little road to Bethlehem’ (published in 1946, then subsequently in 1954 in the arrangement for chorus, as sung here). Other Christmas songs include ‘Star Candles’ (published 1942) and ‘The Robin’s Carol’ (published 1950). Head also wrote several other religious works, including a set of Three Sacred Songs, published in 1954, from which the Ave Maria on this album is taken.

It was for The Ladybrook Ladies Choir, conducted by their founder Elsie Harrop, that Michael Head composed ‘Under the bower of night’ and ‘I am only a singing bird’, setting texts by the Brahmin poet Sri Ananda Acharya (1881-1945), for SSA voices and piano: these were performed by the choir to mark its silver jubilee in 1953. The following year Head added a further five settings of Acharya’s poetry to create a choral cantata, Snowbirds, named after the 1919 publication from which Head had selected his texts. To the women’s voices Head originally added a baritone soloist, though the score published by Boosey & Hawkes in 1956 suggests that part could be sung by a mezzo-soprano (as it is on this recording).

Several of the songs are about or allude to birds, and Head often reinforces the avian theme either through his musical setting or by changing an individual poem’s title. Yet one should not be misled by the cantata’s overall title. Rather, the common theme is the appearance of birds or other natural phenomena as symbols for often quite powerful emotional states. The first song, setting a poem originally titled ‘New Life’ but retitled by Head ‘The Bird of Morn’, concerns the poet’s rejection of the lugubrious world of night in preference for dawn and its promised comforts. In ‘Under the bower of night’, by contrast, the poet embraces the piping song (identified by Head’s piano accompaniment as a bird’s song) heard at dusk. ‘Little Foo’ is a parable about a motherless boy who is comforted by a cliff’s echo, believing it to be his mother’s voice ‘from her high dwelling on the shadowy-ledge above the eagle’s nest’; tragedy follows when he is removed by a well-meaning relative from that echo. ‘Love offerings’ is a short anecdote of an encounter with a woman bearing a basket of fruit; initially sung by the soloist alone, Head intensifies the sense of revelation created by the woman’s answer with an unexpected key-change, reinforced by humming chorus. ‘Only a bird’—retitled by Head ‘Only a singing bird’—is a simple yet charming setting utterly appropriate to its subject. ‘Spring grass’ is another symbolic song, a love duet between the sun and the spring grass, Head here recalling Vaughan Williams’s ‘Love Bade Me Welcome’ from Five Mystical Songs. Vaughan Williams’s influence can be also heard in the last and longest setting, ‘King Ra’, telling of the monarch and his kingdom.

Gary Carpenter (born 1951), though a friend of such leading British composers as Oliver Knussen and Simon Bainbridge, was until recently one of the least recognised of British composers of his generation. Yet more people have seen him perform or heard his music than any of his peers could dream of. Carpenter’s first job after graduating from London’s Royal College of Music was as associate musical director of the 1973 cult film The Wicker Man—he appears on-screen plucking a Nordic lyre while Britt Ekland and Ingrid Pitt prepare Edward Woodward for his fiery demise. Much more recently, his colourful orchestral piece Dadaville was commissioned by the BBC for the opening night of the 2015 Proms in the Royal Albert Hall.

Carpenter’s The Food of Love a projected series of four books of choral settings of Shakespeare, was commissioned by the Shakespeare Birthplace Trust for a two year project, celebrating the 450th anniversary of the playwright’s birth (2014), and the 400th anniversary of his death (2016). Two of Carpenter’s books will be for full choir, another for high voices and piano, and one for male voices and piano. Book 2 recorded here consists of three settings, each for two soprano parts and an alto part with piano accompaniment. The first and last settings are complementary—‘Spring’ (set to an uneven yet lilting metre of five) and ‘Winter’ (its potentially square 4/4 metre offset by the piano’s edgy tango-like rhythms), both taken from Love’s Labours Lost—framing a text taken from As You Like It which, as Carpenter explains, ‘references both hot and cold weather and so sits neatly between the other two songs’.

Born in Glasgow and brought up in Aberdeen, Ken Johnston now lives and works in East Lothian. He has a long association with the National Youth Choir of Scotland, having been encouraged early in his career to write choral music by the choir’s founder and artistic director Christopher Bell; Johnston became one of ten composers based in Scotland commissioned by the choir in 2006, as part of its tenth anniversary celebrations, to each write three songs: one to use the pentatonic scale; one that was diatonic without any accidentals; and one diatonic with accidentals. Published accordingly by NYCoS in three separate collections, the project was so successful that a second collection was commissioned using the same criteria. Ken Johnston was commissioned on both occasions, and on this recording the choir sings the pentatonic songs he wrote for each edition: ‘Bonnie Wee Thing’ from Songbooks 1, and ‘The wind that shakes the barley’ from Songbooks 2. Both songs demonstrate considerable ingenuity in concealing the pentatonic basis of the choir’s music with piano accompaniments that modulate, so implying several key changes without disrupting the choir’s scale.

Another composer commissioned by NYCoS for the second edition of this project was Belfast-born Stephen Deazley, who qualified for inclusion as he now lives in Scotland. His contributions included The Circus, a lively fulfillment of the project’s non-chromatic diatonic category. Deazley has described working with children as having the greatest impact on his composing career: ‘They are the best audience and inspiring to watch when they perform. Where music is concerned they have no pretensions whatsoever—they don’t call it ART—but you know when they like it. Equally you know when they don’t!’