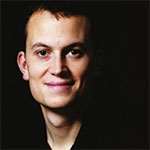 Philip Moore was born in 1976 and is originally from the Vale of Evesham. He studied at London’s Royal Academy of Music with Hamish Milne, during which time he won many prizes. Upon leaving he was awarded the Meaker Fellowship, and was appointed an Associate of the RAM in 2003. In 2004 he became a Steinway Artist.

He has performed in the United States, Canada, Korea, Germany, France, Italy, Spain, the Netherlands, Belgium, Luxembourg, Sweden, Switzerland, Ireland, Tunisia, and at all of the major UK venues. He has recorded for radio and television throughout Europe and appeared as a concerto artist with, among others, the Hallé, Academy of St. Martin in the Fields, Philharmonia Orchestra, Britten Sinfonia, Royal Philharmonic Orchestra and BBC Scottish Symphony Orchestra. He has worked with many international artists, giving duo and chamber music performances and broadcasts with groups such as the Hebrides Ensemble, ECO Ensemble, Conchord and Britten Sinfonia. In 2006 he and fellow-pianist Andrew West began a two-year collaboration with Michael Clark Dance Company, playing Stravinsky’s two-piano version of The Rite of Spring at the Barbican Theatre and worldwide on tour. He has recorded for Linn, Naxos, Signum and Deux-Elles.

Philip’s piano duo with Simon Crawford-Phillips has won international prizes and awards, including a Borletti-Buitoni Trust Fellowship in 2004. The Duo has performed and broadcast internationally, and made frequent appearances as concerto artists and recitalists at the South Bank and Wigmore Hall. They have given world premieres of Detlev Glanert’s Two Piano Concerto and, at the 2009 BBC Proms, Anna Meredith’s Two Piano Concerto.