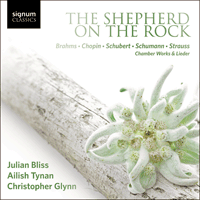 The shepherd on the rock

A Romantic soirée in the company of soprano Ailish Tynan and the clarinet and piano of Julian Bliss and Christopher Glynn brings varied delights by Chopin, Brahms, Schumann, Schubert and Richard Strauss.

Composers had a love affair lasting unbrokenly from the early Spring of musical Romanticism—Schubert—until its long, lingering autumn with Richard Strauss. The object of their affection was the clarinet. The combination of that instrument with piano and the human voice found its locus classicus in the last track on this disc, Schubert’s Der Hirt auf dem Felsen (The Shepherd on the Rock), which resembles a miniature cantata.

The clarinet, like the piano, underwent significant technical improvements during the nineteenth century. Domestic music-making was an eagerly enjoyed pastime and, inspired by the growth of public concert life involving both these instruments, there grew an appetite for arrangements, above all for additional or ‘obbligato’ parts to be combined with voice and piano. For these the clarinet, with its wide range, its variety of tone colour, its capacity for sparkling effects, as well as its ability to evoke soulful melancholy, proved especially popular. Solos for violin, viola, cello, horn and other instruments could often happily adapt to the clarinet’s capabilities. With their transcriptions for this recital, Julian Bliss and Christopher Glynn continue a 200-year old tradition. The era was also the great age of accompanied song, and three of the masters of the German Lied are represented here: Schubert, Brahms and Strauss.

Chopin’s Introduction and Polonaise Brillante in C major (originally for cello and piano) belongs to 1829-30, the last autumn and winter spent in his native Poland before his departure for Paris. It was written for one of his admirers, Prince Antoni Radziwill, a keen cellist and a composer himself, to play with his pianist daughter. In October Chopin had enjoyed a stay at their summer palace near Poznán where the polonaise was composed, the slow introduction being added a few months later. The main Alla Polacca (allegro con spirito), ‘a brilliant drawing room piece suitable for the ladies’, as Chopin described it to a friend, has a stirring cantabile F major second subject for the clarinet that foreshadows things to come.

In Das Mädchen (1884) Brahms sets a Serbian poem, translated by Siegfried Kapper (1820-79). Musical interest is sustained by alternating bars of 3 beats and 4 beats, suggesting the characteristic seven-beat metres of Serbian folksong; by deriving everything from continuous development of the simple opening idea; and by the journey from the minor key first part to the bright major glow of the remainder. With the eight songs of his Opus 57, published in 1871, Brahms set verses by Georg Friedrich Daumer (1800-75), a poet to whom he often turned, for example in the Liebeslieder Waltzes, and (rather like Schubert with Wilhelm Müller) for whom he ensured fame for posterity. The two songs included here—Unbewegte laue Luft and Es träumte mir—reflect, in strikingly pictorial and individual music, a pervading sensuousness, the yearning brought about by unrequited passion: shadowy moods of emotional pain, and patient hope for the elusive, perhaps illusory, consolation of love. O kühler Wald was published in 1877 along with more than 20 other songs that year—a rich period of Lieder-writing. An atmospheric setting of Clemens Brentano (1778-1842), it was described by the Brahms scholar Malcolm MacDonald as a fine example of the composer’s mastery of a tranced nature-mood: ‘deep, elegiac lyricism, with its overlapping triadic harmonies like an interlacing canopy of many wind-stirred boughs’. In Ständchen, to a text by Franz Kugler (1808-58) we have a pictorial evocation of a different kind, but etched with equal precision: a moonlit serenade in a walled garden. Three students (there is more than a hint of the Academic Festival Overture) waft their song with aid of flute and fiddle and zither, and their strumming and sliding and gentle cooing is wittily conveyed through the night air by means of Brahms’s keyboard writing at its lightest: comforting and caressing the gentle arabesques of the vocal line through a dizzy sequence of modulations in such a short spell.

The popularity of the salon, of domestic music-making in the nineteenth century, is reflected in the very name Schumann first gave to his Opus 73—Soiréestücke—soirée pieces. When he came to publish them he re-titled the three movements Fantasiestücke—a term of which he was fond. The looser form of the fantasia, the implied flight of fancy, the freeing up of sonata forms are explored elsewhere in his prodigious piano output. Beethoven’s example would have been an icon for Schumann: the famous Sonata quasi una fantasia, popularly known as the Moonlight, with its three movements—slow, faster, and very fast. That formal outline is repeated here with a gentle first movement marked ‘sweetly and expressively’, followed without a break by a lively Scherzo and Trio (in which triplets predominate), and a ‘fast and fiery’ finale. The prevailing keys of the set are A minor and A major, never straying far from them. Written for a local Dresden clarinettist, the Fantasiestücke were composed in a mere two days: 11-12 February 1849.

In the spring and summer of 1825 Franz Schubert set poems by one of his favourite authors, Sir Walter Scott (1771-1832). Five of the songs come from The Lady of the Lake, and the most famous of them (one of the most famous of all melodies!) is Ellens Gesang III: Hymne an die Jungfrau, better known as Ave Maria. The beauty of the vocal line and the exquisite craftsmanship of the accompaniment have ensured its immortality. Beneath the tranquil surface this is an emotional plea for protection and a safe night’s sleep voiced by a fugitive, despairing young heroine; and is, like that of Gretchen in another context, a superb depiction in sound of a calm and steadfast heart mastering and consoling her fears.

Brahms and Schumann became firm friends, and in 1853 the brilliant young violinist Joseph Joachim befriended Brahms too. Brahms joined Schumann’s circle in Düsseldorf for the month of October 1853 and made another firm friend in Schumann’s pupil Albert Dietrich (1829-1908). As Joachim was to visit the city at the end of the month Schumann proposed that he, Brahms and Dietrich collaborate in writing a work in his honour. So came into being the ‘F-A-E’ Sonata, the letters representing Joachim’s motto Frei aber einsam (Free but lonely). Dietrich provided the opening movement, Schumann an Intermezzo and the Finale, and the youngest of the group, Brahms, must have made a striking impression on Joachim with this tightly-wrought contribution, a stormy C minor Scherzo. There is a short Trio in G making much use of the composer’s characteristic duplet/triplet combinations, and a brief fortissimo Coda in C major.

Chopin’s Three Nocturnes Opus 9, were written in his early Paris years 1830-31, and dedicated to the pianist Marie Pleyel (who was also the wife of the maker of Chopin’s favourite pianos). The central Nocturne in E flat is justly one of the most famous of his output, with its artlessly simple accompaniment and graceful, memorable melody.

Richard Strauss was the son of a distinguished French horn player in Munich, Franz Strauss (1822-1905). Papa Strauss was a man of conservative musical tastes, and he would no doubt have been enchanted by this early work of his talented son—Ein Alphorn hör’ ich schallen—composed in 1876, and inscribed to ‘seinem lieben Papa’. The poet he chose to set was Justinus Kerner (1786-1862). We hear the alpine horn serenely reverberating over mountain and valley, with its simple call consisting of the broken chord of one major triad. The rather Schubertian spell is disturbed only by restless minor key music at verse 3, but the last lines restore the gentle mood. The idyllic freshness of the opening bars of this youthful effusion was something Richard Strauss never lost the ability to conjure up. For all his progressive harmonic daring, he was ever able to evoke the simplest bucolic nature-mood, for example in such late works (sixty or more years on) as Daphne, the Oboe Concerto or the Clarinet and Bassoon Concertino (1947). Und morgen wird die Sonne wieder scheinen (to a poem by the Scottish-German writer John Henry Mackay, 1864-1933) also has a simple ascending arpeggio accompaniment at the outset. But this simplicity belies the sophistication of the harmonic and melodic structure of a beautiful and justly famous song. The composer’s subtlety here is guileless, seamless, and worked out on three simultaneous levels: the piano with its harmonic progressions, the clarinet melody, and the independent vocal line. The unfolding of these three strands in a mood of unhurried wonderment brings a sensation of hushed poise that is maintained to the last note. This was a worthy member of that marvellous group of songs Strauss presented to his bride, the singer Pauline de Ahna, as his wedding present on 10 September 1894.

Der Hirt auf dem Felsen was composed in October 1828 and designed as a display piece for a renowned Berlin opera singer Anna Milder-Hauptmann. It stands apart from the great world of his Lieder, not only by including clarinet obbligato, but in its dramatic scope. The memorable, graceful opening leads to a truly Schubertian middle section, and the final allegretto bubbles over in radiant anticipation of the spring. Unusually the text is chosen from two authors, Wilhelm Müller (poet of Schubert’s two great song cycles Die schöne Müllerin and Winterreise) and Karl August Varnhagen von Ense (the only verses Schubert ever set of this writer). Müller’s lines for the first 4 verses come from his Der Berghirt (The Mountain Shepherd); Varnhagen’s verses 5-6 (beginning In tiefer Gram; long misattributed to Helmine von Chézy) are from his poem Nächtlicher Schall (Nocturnal Sounds); Schubert freely adapts the joyous final verse from Müller’s Liebesgedanken (Thoughts of Love). It is poignant to reflect that this optimistic reveille of the spirits, this piping-in of a new spring, was written the very month before Schubert’s early death.