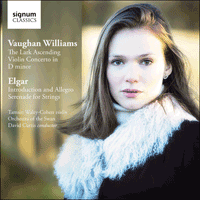 British violinist Tamsin Waley-Cohen—described by the late Ruggiero Ricci following a masterclass as the 'most exceptionally gifted young violinist I have ever encountered'—adds to her already prodigious reputation with a new disc of timeless works for strings by Ralph Vaughan Williams and Edward Elgar. Joined by the Orchestra of the Swan under David Curtis, the culmination of the programme is an enchanting performance of Vaughan Williams’ The lark ascending.

'In the Concerto she finds a convincing interplay between period-style non-vibrato and dreamy sensuality; and The Lark Ascending's opening solo searches out an extreme degree of musical space in a way that's at once daring and mesmerising, while the supple flow of the main sections is beautifully judged' (BBC Music Magazine)» More

Vaughan Williams wrote his Concerto for Violin and String Orchestra in 1924-5 and dedicated it to Jelly d’Aranyi, Hungarian violinist and grand-niece of Joseph Joachim. She gave the premiere in November 1925. The composer originally entitled the work 'Concerto Accademico', a name he subsequently disliked, withdrawing it before a Menuhin performance in September 1952. The work reveals a less familiar aspect of Vaughan Williams’ musical personality, its relative emotional detachment possibly suggesting a reaction to the horrors of the First World War. The opening movement, marked Allegro pesante, begins with a robust idea based on rising fifths. Neo-baroque tendencies—equally evident in many other works of this period, not least the Fugal Overture and Fugal Concerto by Vaughan Williams’ friend and confidant Gustav Holst—are here incorporated within Vaughan Williams’ personal language. In no way do they submerge his assimilated folk-song characteristics, while occasional suggestions of bitonality add pungency. Semiquaver passagework for the soloist gives way to a cadenza (in strict time) before the time-signature changes from 2/4 to 3/4, with some bars of 6/8. The main theme here, with light pizzicato accompaniment, is derived from the second part of the opening subject. A new lyrical melody emerges during the development section, in accord with the violin’s change to legato semiquavers. A dialogue between fortissimo strings and the soloist’s chunky double-stopping leads to another brief cadenza with chordal accompaniment, before a general intensification which includes rapid arpeggiated string-crossing for the violin and some playful cross-rhythms. This culminates in a brief final Presto with an emphatic cadence (Molto allargando). The intimate central Adagio, scored for muted strings, begins with a solo cello (unmuted) before the violin enters with even more decorative melodic lines. The key having changed to G major, the second violins initiate a little sighing motif which becomes an almost permanent feature while Vaughan Williams shows how expressive a rising scale can be. Following an eloquent climax the movement relaxes into a passage marked Tranquillo which includes a short cadenza. The finale is dominated by jig rhythm, its main theme adapted from the composer’s opera Hugh the Drover. Subsequent material includes a new violin theme marked scherzando and a cantabile melody in more sustained notes, and thereafter legato and staccato elements are effectively combined and contrasted. The concerto—a work which has suffered unreasonable neglect—has a delightfully understated ending, as the soloist’s rhythm runs out of steam before the final chord marked ppp. A violin and piano arrangement by Vaughan Williams’ ex-pupil Constant Lambert was published in 1927.

Elgar completed his Introduction and Allegro in February 1905. In this much more ambitious work than the Serenade for strings of 1892 his consummate mastery of the string orchestra’s capabilities and wide range of tone-colours is wonderfully evident, with the addition of a string quartet offering further potential. Elgar effectively deploys the quartet in varying roles—as a contrasting texture in itself, in dialogue with the string orchestra, and in combination with the tutti group. The opening gambit is immediately arresting, the first dozen bars covering a surprising expressive range to which tempo fluctuations and textural variety contribute. This richness dissolves into what Elgar called a 'Welsh theme' on solo viola, the inspiration for which dates from 1901 when he heard the distant singing of a choir across Cardigan Bay. One common feature of all their songs, which Elgar assumed to be a specifically Welsh characteristic, was a falling third. Three years later he heard 'far down our own Valley of the Wye, a song similar to those so pleasantly heard on Ynys Lochtyn' … 'Although there may be a Welsh feeling in the one theme … the work is really a tribute to that sweet borderland where I have made my home'. The splendid Introduction gives way to the main Allegro, in which the ascending melody originally played by the quartet in bar 5 is treated more purposefully. Other melodic material from the Introduction reappears, as well as a new idea in staccato semiquavers initiated by the solo quartet, before the Welsh theme returns on solo violin and viola with new, beautifully enhanced accompaniment. A renewal of the Allegro tempo brings, in Elgar’s words, 'no working-out part but a devil of a fugue instead'. This builds to a climax of extraordinary intensity before ebbing away, and now fragments of the staccato semiquaver idea return, creating a smooth transition to the reprise of the original Allegro section. A final, glorious restatement of the Welsh theme—marked molto sostenuto then con fuoco—leads to an exhilarating conclusion, the final sforzando pizzicato chord being one of many imaginative touches throughout the work. Asked about his superbly idiomatic string-writing, Elgar advised: 'Study old Handel. I went to him years ago.' The Introduction and Allegro was premiered in London’s Queen’s Hall on 8 March 1905, with the composer conducting the LSO. Although it took about forty years to become established, it is now recognised as one of the greatest works in the string-orchestra repertoire.

Although Elgar’s Serenade for strings, composed in 1892, is a less imposing work than his Introduction and Allegro, it would be a mistake to underestimate this relative miniature. Elgar’s feeling for effective string-writing is already obvious and his comment to his friend Jaeger—'Really stringy in effect'—expresses his personal satisfaction. A rhythmic figure heard on the violas in the opening bars recurs as a neat unifying thread throughout a movement which exudes natural charm and tenderness. Its emotional effect is enhanced by restraint and understatement. Ernest Newman aptly described the central Larghetto as 'a pure song-without-words'. The depth of its poignancy is perhaps surprising in the context of a serenade, a genre more usually associated with diversion than emotional engagement. Midway through the amiable 12/8 Finale, the viola figure from the opening of the piece unobtrusively returns and a tiny element of its distinctive rhythm subtly pervades the gentle coda. Apparently this serenade was originally conceived as Three Pieces for String Orchestra—Spring Song, Elegy and Finale—first performed in 1888. The manuscript was subsequently lost but the serenade as we know it today probably represents Elgar’s revision of these Three Pieces. The Serenade for strings was included in the very last of Elgar’s numerous recordings of his own music, made on 29 August, 1933 with the London Philharmonic Orchestra.

Vaughan Williams composed The lark ascending soon after his London Symphony, and just before the outbreak of World War I. Therefore the premiere was delayed until 1921, by which time the composer had revised the work. It was the first of his several compositions for solo instrument and orchestra, a motley collection including concertos for piano, violin, oboe and tuba, and other works featuring solo viola, viola with wordless chorus, and harmonica. The score of The lark ascending is prefaced by lines which the composer selected from the poem of the same name by his near-neighbour George Meredith (1828-1909):

He rises and begins to round,
He drops the silver chain of sound,
Of many links without a break,
In chirrup, whistle, slur and shake [...]
For singing till his heaven fills,
‘Tis love of earth that he instils,
And ever winging up and up,
Our valley is his golden cup,
And he the wine which overflows
To lift us with him as he goes [...]
Till lost on his aërial rings
In light, and then the fancy sings.

The lark ascending is imbued with a profound sense of communion with nature. Rather than scorning English pastoralism—as Elisabeth Lutyens and others did with observations such as 'the cowpat school'—we should value this rare quality expressed so perfectly by Vaughan Williams in particular. Like Bartók, he assimilated folk-song characteristics so thoroughly that his own melodic invention became indistinguishable—there is no actual folk-song borrowing in The lark ascending.

Following a brief introduction for woodwind and muted strings, the soloist enters with a poetic cadenza marked pianissimo and sur la touche. The solo violin part, with its gently animated flurries, impressionistically evokes the actual song of the skylark, which in nature consists of rapturous outpourings sometimes lasting unbroken for several minutes. At the re-entry of the orchestra the solo violin takes up the 6/8 melody introduced towards the end of the cadenza, but occasional arabesques continue to recall the characteristic abandon of the skylark song. Another cadenza leads to a contrasting episode (Allegretto tranquillo) with a new melody for flutes. A subsequent episode (Allegro tranquillo) begins with solo violin trills and arabesques now punctuated by off-beat triangle, before the oboe plays a further new melody marked scherzando. In each episode the solo violin part generally assumes greater melodic definition while retaining some elements of the skylark song. Both the flute melody (now on solo violin and Allegretto molto tranquillo) and the earlier 6/8 section return and the work ends with the unaccompanied violin once more in skylark mode. Vaughan Williams dedicated The lark ascending to Marie Hall, the soloist in the first performance in June 1921.

I was very happy when the opportunity arose to record the Vaughan Williams Violin Concerto and The lark ascending with the Orchestra of the Swan and David Curtis, as they were the first works we played together and we have performed them many times since.

Whilst the 'Lark' is one of the best loved and most famous works in the repertoire, the Concerto is, rather unfairly, hardly known. It is a true 'chamber' concerto, full of humour, eloquence and imbued with a rustic spirit. The outer movements have a playful wildness about them, the music darting and dancing, that make them great fun to play, and I find the slow movement a jewel of beauty and expressivity.

The slow passages, both in the second movement of the Concerto and the 'Lark' contain a poignant nostalgia, filled with longing for remembered times. There is a strong sense of narrative, not unlike the English folk stories and older Celtic sagas which are so cyclical and rooted in the power of nature. Larks are heard so rarely now, yet I have many childhood memories of their song, and indeed too of the magisterial beauty of the English countryside. I have spent so much time on Exmoor, where my family home still is, and love the raw wildness of the moors and the lush rolling hills, always changing with the light.

When we came to record the 'Lark' in particular, the improvisatory qualities presented more of a challenge for me than usual in the recording process. I don’t think I have ever played it, and in particular the Cadenzas, the same way twice, which is part of the constant joy of performance. Therefore, what is captured here is the feeling and story of one moment in time, told through the truthful simplicity of Vaughan Williams’ beautiful music.

Perhaps the 'Lark' is Vaughan Williams’ contribution to one of literature’s universal themes; we hope that nature, in its beauty and perfection, is eternal, whatever mess we are creating.