Born in London, Tamsin Waley-Cohen enjoys an adventurous and varied career. In addition to concerts with the Royal Philharmonic, London Philharmonic, Hallé, Liverpool Philharmonic, Czech Philharmonic, Yomiuri Nippon Symphony, Royal Northern Sinfonia and BBC orchestras, amongst others, she has twice been associate artist with the Orchestra of the Swan and works with conductors including Andrew Litton, Vasily Petrenko, Ben Gernon and Tamás Vásáry.

Her duo partners include James Baillieu and Huw Watkins. She gave the premiere of Watkins’ Concertino, and in Summer 2020 will premiere a new work for violin and piano with him at Wigmore Hall. She is thrilled to be a Signum Classics Artist. With her sister, composer Freya Waley-Cohen, and architects Finbarr O’Dempsey and Andrew Skulina, she held an Open Space residency at Aldeburgh, culminating in the 2017 premiere of Permutations at the Aldeburgh Festival, an interactive performance artwork synthesising music and architecture. Her love of chamber music led her to start the Honeymead Festival, now in its twelth year, from which all proceeds go to support local charities.

She is a founding member of the Albion string quartet, appearing regularly with them at venues including Wigmore Hall, Aldeburgh Festival, and the Concertgebouw. In 2016-2017 she was the UK recipient of the ECHO Rising Stars Awards, playing at all the major European concert halls and premiering Oliver Knussen’s Reflection, written especially for her and Huw Watkins. In the 2018-19 season she toured Japan and China, and gave her New York Debut recital at the Frick. She studied at the Royal College of Music and her teachers included Itzhak Rashkovsky, Ruggiero Ricci and András Keller. 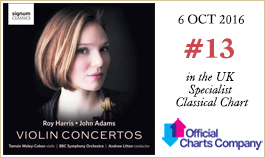