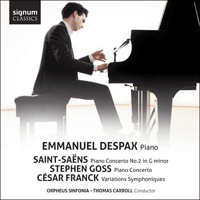 Emmanuel Despax is a rising star on the UK and international piano scene, who has performed at the Wigmore and Cadogan Halls in London, the Salle Gaveau and Louvre Auditorium in Paris, and with orchestras including the CBSO.

This debut concerto recording, with the Orpheus Sinfonia under Thomas Carroll, features the premiere recording of Stephen Goss’s Piano Concerto, inspired by the designs of Thomas Heatherwick (the work’s premiere performance was the first classical concert in which audiences were invited to bring their ipads and tablets, to watch an interactive display designed to accompany the music). The work is accompanied by two similarly expressive and characterful works, Saint-Saëns’ ever-popular Piano Concerto No 2 and Franck’s Variations symphoniques.

'Impressive is the fact that all three works were recorded (with a couple of patching sessions) in a single live concert. Despax’s first concerto disc is, altogether, a noteworthy achievement' (Gramophone)
'Throughout these pieces Despax is finely accompanied by Carroll and the Orpheus Sinfonia. They get to show their serious metal in the Franck, their joie de vivre in the Saint-Saens and their sheer technical brilliance in Goss's magical but tricky textures. In each they shine' (Planet Hugill)» More

A recurring theme running through the music of Stephen Goss is the evocation of time and place. His work on musical landscape dates back to two collaborations with Charles Jencks, The Garden of Cosmic Speculation (2005) (which was featured on the South Bank Show) and Frozen Music (2006) (commissioned for the opening season of the Menuhin Hall). More recent projects include his critically acclaimed album Northern Lights (2010), The Flower of Cities (2012) for John Williams and Friends, and Portraits and Landscapes (2010), Steve’s first piece for Emmanuel Despax.

The Piano Concerto was inspired by the extraordinary design work of the Heatherwick Studio, whose Olympic Cauldron was a centrepiece at the London 2012 Games. Each of the four movements takes a particular Heatherwick project as a starting point before opening out to reveal other landscapes and related ideas.

The Fanfare, (a portrayal of the Longchamp Store in Manhattan) is a cityscape that frames exploratory cadenzas for the pianist with brass chorales and flourishes. This leads without a break to a Moto perpetuo which captures the sparkling beauty of Bleigiessen, an eight-storey-high sculpture made from thousands of glass beads hung on wires. Here, the delicate, continuous solo part generates glittering reflections rendered in varied orchestral hues.

The heart of the concerto is a spacious slow movement evoking the tranquility of the Seed Cathedral—a striking structure that housed 60,000 plant seeds at the ends of long, flexible acrylic rods. The Adagio is tinged with a bittersweet nostalgia and characterized by a romantic freedom that contrasts sharply with the highly rhythmic movements surrounding it. The Finale is a compelling, virtuosic tour de force that switches between four distinct moods, ‘bright and energetic’, ‘hard and brittle’, ‘dark’, and ‘hot blues’. The impetus was the sculpture B of the Bang, an abstract depiction of the explosion of the starting pistol in a track running race. Accented chords on xylophone and pizzicato strings suggest the large metallic structure; a 56-metre-high cluster of tapered steel rods. The opening gesture provides the movement with a powerful momentum that remains relentless throughout.

‘He knows everything, but he lacks inexperience’ was Hector Berlioz’s paradoxical verdict on the young Saint-Saëns, whose dazzling quickness of mind—he started composing at the age of three, gave his first public piano recital at ten, entered the Paris Conservatoire at 13, and was a keen student of the Latin classics, astronomy, geology and archaeology—certainly testified to an old head on young shoulders. As performer, editor and publicist he was an advocate of the latest musical trends of Schumann, Liszt and Wagner and at the same time a campaigner for the almost-forgotten masters such as Bach, Handel, Rameau, Gluck, and Mozart. Apart from this—and most important of all—he was also a prolific and prodigiously talented composer in his own right. After the French defeat in the Franco-Prussian War, Saint-Saëns became one of the leaders of a movement to strike back at the enemy culturally. He was one of the founders of the Société Nationale de Musique, intended to give performances of works exclusively by living French composers. He aimed to re-establish French art, particularly by displaying excellence in the ‘abstract’ forms of symphony, concerto, sonata and chamber music, which the Germans had dominated for nearly a century.

Saint-Saëns wrote five piano concertos in all, but it is Piano Concerto No 2 in G minor, Op 22 which has remained by far the best-known. It was the pianist Sigismond Stojowski who quipped that it ‘begins as Bach, but ends as Offenbach’, but in fact the concerto’s unusual trajectory from solemnity to high jinks, with no slow movement but instead a central scherzo, is surely what has endeared it to audiences up to the present day. It is a striking instance of Saint-Saëns’ famous facility of technique and inspiration, and as sometimes occurs with works of distinction and character, it only came into being by happenstance. Saint-Saëns wrote it in a mere three weeks in the spring of 1868, for a Paris concert being given by the Russian composer, pianist and conductor Anton Rubinstein. Saint-Saëns had suggested that he should provide a novelty in the shape of a new piano concerto which he himself would play. The concert took place in the Salle Pleyel on 6th May, with Rubinstein conducting and Saint-Saëns as soloist, and the new work was not exactly a success with critics and public, but within a few years it was a firm favourite.

Gabriel Fauré, a pupil of Saint-Saëns at the time, remembered years later that he had shown his teacher a Tantum ergo setting. Saint-Saëns glanced at it hurriedly, then said, ‘Give this to me. I can make something of it!’ What emerged was the main theme of the first movement (Andante sostenuto) of the new G minor Piano Concerto, following a solo improvisation in the manner of Bach to get things started. A gentler sub-theme (the composer’s own) has a Chopinesque flavor, especially in its keyboard embroidery in thirds.

Like Saint-Saëns’ opening movement and Finale, an Allegro scherzando in between is written in sonata form. The spirit is nonetheless elfin, in the Mendelssohn manner—much as the Frenchman’s long-finished but not-yet-published Second Symphony had been—although the second theme in the second movement of the concerto anticipates the Carnaval des animaux, still two decades down the road.

The finale is a presto tarantella in 2/2 time, whose G minor tonality reminds us that Mendelssohn ended his ‘Italian’ Symphony 35 years earlier with a minor-key tarantella. If Saint-Saëns’ premiere audience was not immediately cordial—Parisians had become as exasperatingly superficial as the Viennese—Franz Liszt praised the Second Concerto without stint, saying that it pleased him ‘singularly’. Not for the first time, nor for the last, was his praise prescient. Later on, of course, Parisian audiences let everyone believe they’d loved it from the start.

One of the glitterati of the French music scene, Louis Diémer (1843–1919) had taken the piano part in Franck’s Victor Hugo-inspired Les Djinns, for piano and orchestra, on 15th March 1885; he earned for the composer a rare plaudit from the press: ‘interesting work … for the direct originality of its thought and the admirable polish of its style.’ The Ménestral’s critic continued: ‘As I listened to the fine logic of these developments and the arresting effects of the blending of the piano with the orchestra, I was struck by the thought of how sad it is that the name of this eminent musician is so rarely seen on programmes, too little honoured at a time when he is one of the masters of our epoch, and will indubitably remain one.’

This proved prophetic. Franck was delighted and credited his success to Diémer’s brilliant playing—sec, léger, and articulated with lightning precision—which he promised to reward with ‘a little something’. Good to his word, Franck dedicated his orchestration of the Variations symphoniques to Diémer. He began work in the summer of 1885, and completed it on 12th December. In his ultimate, old master phase, Franck transformed everything he touched. The orchestral highlighting of pianistic virtuosity—heard in such works of his youth as the Variations brillantes sur l’air du Pré aux clercs (1834) or the Variations brillantes sur le ronde favorite de Gustave III (1834–35)—or the Lisztian heroics of the soloist locked in combat with the orchestra are left behind in the Variations symphoniques in favour of the deft dovetailing of piano and orchestra. This use of the piano as a concertante instrument would be taken up by Vincent d’Indy in his Symphonie sur un chant montagnard français (1886) and in turn, be adopted as far afield as Ferruccio Busoni’s massive five-movement Piano Concerto (1904).

The strings open with a menacing dotted figure in unison, answered by the piano with a plaintively drooping phrase whose dialogue gives way to a second theme introduced by pizzicato woodwinds and strings. An appassionato development leads shortly to six seamless variations on the second theme through which the piano decorates, comments, alludes, and accompanies, as the mood shifts from triumphant assertion to mystical absorption and languishing, muted sighs. A sudden trill in both hands, two octaves apart, prompts the orchestra to begin the extensive, rhapsodic finale in which the thematic material of the preceding is wrought to an incandescent apotheosis. Without doubt, the irresistible, surefire breeziness of this finish has insured the Variations symphoniques first place in popularity among Franck’s works.

Curiously, the premiere, at the annual orchestral concert of the Société Nationale de Musique, May 1, 1886, with Diémer at the piano, passed almost without mention. At the second performance, an all-Franck concert on January 30 of the following year—again featuring Diémer—the surefire misfired as the aging conductor, Jules Pasdeloup, miscued the orchestra’s entrance.