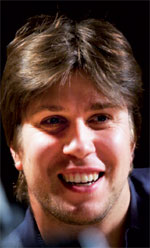 Acclaimed for his inspirational performances and exciting musicianship, Thomas Carroll enjoys a distinguished and varied career as a cellist and, more recently, as a conductor. Since conducting his debut performance in the Berlin Philharmonie in 2006, he has gone on to work with orchestras in the UK and abroad. Together with principals from many of the London orchestras, he founded the London Beethoven Chamber Orchestra and, in April 2012, was made Artistic Director of the Orpheus Sinfonia, with whom he performed all the Beethoven symphonies during 2012-13 and leads on this recording—the orchestra’s debut CD.

He has recently completed a tour of the UK, conducting in most of the country’s major concert halls. As a concerto soloist, he has performed with orchestras including the London Symphony Orchestra, the Royal Philharmonic, the London Philharmonic, Philharmonia and BBC National Orchestra of Wales, and with orchestras abroad including the Melbourne Symphony Orchestra, Vienna Chamber and the Bayerische Rundfunk in venues such as the Royal Albert Hall in London, Konzerthaus in Vienna, Herkulessaal in Munich and Lincoln Center in New York.

His recent recording for Orchid Classics of works by Beethoven, Brahms and Schubert has received widespread critical acclaim—the Sunday Times described it as ‘enrapturing, sumptuous, sweeping, intense, intelligent and invigorating’ and the Guardian wrote that his versions of the pieces were ‘intensely musical accounts, with no details overlooked and no challenges ducked … not a note out of place.’ The CD was awarded Disc of the Year on the International Record Review site, MusicWeb International. His discography as a conductor includes music by Toch on Naxos, while as a chamber musician he has recorded extensively for Orchid Classics, Chandos, Champs Hill Records and Quartz. He is a member of the London Conchord Ensemble with whom he regularly performs, most recently live on BBC Radio 3 in a Chamber Music Prom at Cadogan Hall.

Thomas is a Professor at the Royal College of Music and the Yehudi Menuhin School. He gives frequent masterclasses in the UK and abroad, is a regular guest on many radio stations worldwide and is one of only two people ever to win both YCAT, UK, and YCA, USA.