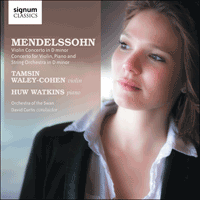 Outstanding British violinist Tamsin-Waley Cohen—described by the late Ruggiero Ricci following a masterclass as 'the most exceptionally gifted young violinist I have ever encountered'—performs a fittingly prodigious work by Felix Mendelssohn.

The Violin Concerto in D minor was composed when Mendelssohn was just 13, and has remained popular with audiences the world over since its rediscovery in the middle of the 20th century by Yehudi Menuhin. The work is paired on this disc with Mendelssohn's Concerto for violin & piano, where Waley-Cohen is joined by British pianist Huw Watkins, all alongside the enthusiastic accompaniment of the Orchestra of the Swan under David Curtis.

‘Mendelssohn … is the Mozart of the 19th century; the most brilliant among musicians, the one who has most clearly recognized the contradictions of the time, and the first to reconcile them’. This was the verdict of Robert Schumann, greeting the publication of Felix Mendelssohn’s D minor Piano Trio in 1840. The comparison with Mozart was already almost a commonplace, partly because of Mendelssohn’s sure instinct for classically-balanced form, and partly for the seeming youthfulness of his inspiration. Both composers, of course, had been child prodigies, and in fact it is the brilliant music of Mendelssohn’s extreme youth that has continued to uphold his reputation.

It’s often said that if Mozart and Mendelssohn had both died at the age of 20, Mendelssohn would have been accounted by far the greater composer—for though both of them wrote copious music from an early age, Mendelssohn’s early works surpass Mozart’s in both substance and originality. It was only later that Mozart’s genius came to full fruition, while in the view of many critics Mendelssohn never surpassed his teenaged achievements in works like the String Octet or the incidental music to A Midsummer Night’s Dream. From his earliest years he seemed to have a natural affinity for string instruments, as is well illustrated by the twelve-and-a-bit Sinfonias for string orchestra he wrote between the ages of 12 and 14 (student works half-way between Baroque symphonies and string quartets writ large) and the aforementioned String Octet, written at age 16, essentially conceived as a symphony-like double string quartet.

More than 160 years after his death, Mendelssohn’s position as a crucial link between the Classical style of Mozart and Beethoven and the high Romantic style of Schumann and Brahms is quite secure. Yet he is still an imperfectly-known composer, whose reputation continues to rest on a very partial selection of his works: the last two symphonies, say, the Violin Concerto in E minor, the Hebrides overture, the Midsummer Night’s Dream music, the Octet and some of the other major chamber compositions and the Songs without words for piano. Even the music of his brilliant early years is by no means familiar in its entirety: for instance, it includes the two concertos heard on this disc, written between the ages of 13 and 14.

It is important to understand the milieu in which Mendelssohn’s early symphonic works appeared. As grandson of the philosopher Moses Mendelssohn and son of the banker Abraham Mendelssohn, whose wife also belonged to a prominent Jewish family, Mendelssohn and his siblings were raised in an extraordinarily cultured background and were given the best possible education. When the family relocated from Hamburg to Berlin in 1811, for fear of Napoleon, their house became an intellectual and artistic salon frequented by leading artists, scientists and musicians. It has been said that ‘Europe came to their living room’. In addition to such luminaries as Hegel, Heine, von Humboldt and the mathematician Dirichlet, Mendelssohn studied with Zelter, one of the first 19th-century enthusiasts for the music of JS Bach, and regularly met leading musicians from the Berlin Philharmonic Orchestra. His adolescent works—even his orchestral works—were performed at his parents’ house by a private orchestra drawn from these players. In such an environment his musical genius flowered and he wrote a remarkable series of works: no doubt intended at first for domestic consumption, but also with his ambitions fixed on a wider world. For example in 1822-23, in addition to the two concertos featured here, he composed a second Piano Quartet (the first was already published!), a Piano Concerto, a Concerto for 2 pianos, eight of his String Symphonies and an opera, The Two Nephews.

The Violin Concerto in D minor dates from 1822: that is, 22 years before Mendelssohn’s ‘other’ and much more famous Violin Concerto in E minor. The piece has a curious history. After Mendelssohn’s death in 1847, his widow gave the manuscript to the renowned violinist-composer Ferdinand David, a close friend of Mendelssohn who had premiered the E minor concerto; but David apparently did nothing with it, and the score returned to the Mendelssohn family and was handed down within the family for several generations. At some point after World War II it was acquired by the London-based rare book dealer (and amateur violinist) Albi Rosenthal, who in the spring of 1951 showed this ‘lost’ Mendelssohn concerto to the world-famous violin virtuoso Yehudi Menuhin, who as a teenager had premiered the ‘lost’ violin concerto of Schumann. Menuhin was immediately attracted to the work and bought the rights to it from the surviving members of the Mendelssohn family, then living in Switzerland. He gave the work its first public performance at Carnegie Hall, New York on 4 February 1952, conducting a string orchestra with his violin bow, and it was published the same year. Subsequently Menuhin played the concerto many times and made three recordings of it, but it has never entered the mainstream repertoire, remaining rather on the fringes of it.

Among his other talents, Mendelssohn was an excellent violinist even in his childhood, and gave his first recital at the age of 9, though he later took the piano for his chief instrument. He wrote the D minor Concerto not for himself but for his friend and violin teacher Eduard Rietz. Rietz was only three years Mendelssohn’s senior—he would later help to found the Berlin Philharmonic Society and was the concertmaster when the 19-year-old Mendelssohn revived Bach’s St Matthew Passion in 1829, a legendary performance which did much to restore public awareness of Bach’s music.

This concerto for violin and strings is, in a sense, a cousin of Mendelssohn’s contemporary series of symphonies for string orchestra. Like them it derives not so much from Mozart or Beethoven as from CPE Bach and the North German symphonic school; equally important is the influence of the French violin school represented by Viotti and his Parisian followers, who included Rodolphe Kreutzer, Pierre Rode (Eduard Rietz’s teacher) and Pierre Baillot, with whom the young Mendelssohn had studied in Paris in 1816. The concerto’s three movements represent a kind of historical progression. The first, with its angular, broken melodic lines, recalls the mannered empfindsam (ultra-sensitive) style associated with CPE Bach. Unlike the later E minor concerto it begins with an orchestral exposition, and is continuously restless in mood. By contrast the opening of the D major Andante is based on a theme at once serenely classical, even Mozartian in its poise; while the finale, a lively, humorous rondo in a popular (almost gypsy) style, bristles with solo figurations reflecting the virtuoso styles of Mendelssohn’s own time. (There are written-out cadenzas in both the second and the third movements.) As Yehudi Menuhin declared, it shows a remarkable freedom and elasticity of form.

It was not long afterwards, in 1823, that Mendelssohn composed the Concerto for violin, piano and strings in D minor. Following the composition of the D minor Violin Concerto and the A minor Piano Concerto composed earlier in 1822 this may have seemed to him like a logical next step (he probably envisaged Rietz and himself as soloists), though there were few earlier examples to which he could have looked as models. He may have had in mind Beethoven’s Triple Concerto for violin, cello, piano and orchestra; he would certainly have known that Mozart began such a work only to abandon it (leaving a tantalizing fragment, K135f anh. 56). Laid out on an altogether larger scale than the D minor Violin Concerto, this Double Concerto is one of Mendelssohn’s most brilliant adolescent works. Superficially the two solo instruments would seem to be almost incompatible, though of course the pianoforte of Mendelssohn’s day was a gentler, lighter beast than today’s concert grand: but he uses them with such resource and knowledge of their respective qualities that there is never a sense of incongruity. They dialogue with one another, they mimic each other, the piano accompanies the violin (and vice versa) and they are also given solo spots of their own.

The piece clocks in at nearly 40 minutes, and every one of them is entrancing. The grand first movement Allegro, a spacious concertante sonata form with double exposition for soli and orchestra and cadenzas for both soloists, takes up more than half the piece and displays precisely that perfect command of form which Mendelssohn seems to have been born with. The Adagio opens with an orchestral introduction setting out the main theme, which is then taken up by the piano, the violin only entering later, after which the orchestra has little to contribute while the two soloists engage in an extended, almost operatic dialogue. The effervescent Allegro molto finale, in sonata form with a pell-mell first and a sweetly lyrical second subject, is an utter delight of post-Mozartian charm and tremendous energy, culminating in a breathtakingly brilliant conclusion.

As I was first becoming acquainted with these two early Mendelssohn concerti, I was captivated by the youthful spirit which seems to bound off the page.

The D minor Concerto for violin is the earlier of the two, and evidently so—the almost childlike innocence of the emotional content is constantly charming. As I was playing it, I was struck by the contrast between the heavily Baroque influenced orchestral exposition and the violin’s much more improvisatory line. Time and again, the operatic quality of the writing grabbed my attention; here like a coloratura, there a recitativo, and always with the natural and breathing lines we associate with Mendelssohn. The playful passages in the outer movements tell of the brilliant virtuosity which will flow from his pen in so many of his later works, including the Double Concerto on this disc. The similarities between the slow movement of the D minor Concerto played here and the famous E minor concerto are remarkable. Indeed, both are really Songs without words; simple Gondolier’s songs, gently lilting, without pretension. The Klezmer-like dancing last movement seemed to come to life during our rehearsals, telling of Mendelssohn’s Jewish roots. In addition to the great artists and thinkers of the time that would frequent his family home, the Mendelssohn family’s Jewish heritage clearly remained with them.

Written only the following year, the Concerto for violin, piano and strings in D minor brings us a much more mature musician. His grasp of form is impressive, showcased in each movement, but in particular the colossal first movement. Here, his teenage exuberance is in full swing. Brilliantly virtuosic, tender, playful, and restless, he could hardly have packed more in. Everything is on a grand scale yet what fun it is to play! After the engaging orchestral exposition, it is a wonderful release when the piano and violin finally begin in a whirl of notes. Again, some of the recitativo passages are remarkable in their bold romanticism and freedom of expression. The noble, simple and beautiful second movement is masterful, and the last is dazzling in its cascades of sound—chasing, arguing, teasing, flirting, and dancing, always fleet of foot.

Both are a joy to play, for their beauty and brilliance, and bringing us back to the teenage world of endless exploration and possibility.