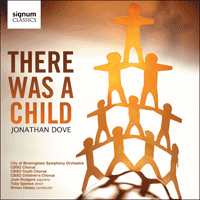 There was a child

Jonathan Dove wrote There Was a Child as a tribute to a friend’s son who died tragically young. Filled with both joyous celebration and heartfelt emotion, it’s a big, warm-hearted modern masterpiece in the spirit of Britten and Vaughan Williams—following in an evergreen english tradition and featuring the combined forces of the CBSO and CBSO Chorus, Youth Chorus and Junior Chorus with soloists Joan Rodgers and Toby Spence.

'Faced with a commission to pay tribute to his friend's son whose life was cut tragically short, Jonathan Dove could all too easily have turned to composing a Requiem. Instead, he has fashioned an oratorio celebrating childhood and young life from birth. A Walt Whitman poem gives the work its title and finale, in which innocence and experience are grafted on to an ecstatic sense of eternal continuity. Texts are adroitly assembled from authors such as Thomas Traherne and Emily Dickinson, and there's a penultimate triptych involving Chidiock Tichborne, Shakespeare and Tennyson in musings on loss and grief. It all plays to Dove's trademark strengths: the young choirs draw on his community music prowess and his approachable idiom shows his willingness to refract a multiplicity of influences, ranging from Walton to Britten to John Adams. The setting of Keats's A Song about Myself is an impish Brittenesque scherzo, revelling in the freshness of the children's choir. In this live recording of its premiere, conductor Simon Halsey's CBSO forces savour the music's immediacy' (BBC Music Magazine)

When Rosemary Pickering asked me to write a piece to celebrate the life of her son, we both immediately felt it should involve singing. Singing with other people is one of the most joyful activities I know, so this had to be a choral work. And music celebrating young life should include the sound of children’s voices. The idea of mother and son suggested two soloists: soprano and tenor. Accompanying these different voices would be all the colours of the symphony orchestra. The Norfolk and Norwich Festival and the City of Birmingham Symphony Orchestra joined in this commission, of 2009, to create a large-scale piece of communal music-making.

I started looking for words for all these voices to sing. I found poems by Charles Causley and Langston Hughes describing the wonder of birth; by Wordsworth, Keats, Traherne and Emily Dickinson conjuring up different aspects of childhood—naughtiness, carefree playfulness, youthful adventures. My choices were informed by stories Rosie and Richard had told me about their son Robert—particular stories about a unique individual, but which also conjured up archetypal images of youthful liveliness, mischief and outdoor escapades.

Most of the texts are celebratory, but there is no avoiding the terrible moment when a young life is cut short in the middle of adventure. Shakespeare evokes the grief of a mother for her child, and Tichborne sings of death coming too soon. I did not want the piece to end here, and it was important for Rosie to remember all the joy her son’s short life brought her. Walt Whitman’s poem There was a child went forth is a radiant vision of a child absorbing everything around him and connecting with the whole world.

Since my childhood, music—especially choral music—has given my life meaning, so commissioning a piece to celebrate my son Robert’s life seemed cathartic—if a little ambitious. Jonathan Dove was the obvious choice of composer for me. I had been struck by his theatre music over the years and in the 1990s worked with him on his first concerto commission; his strong feeling for community connected with my need for this piece to be universal. Robert’s father, Richard Van Allan, had been rehearsing Jonathan’s first main-stage opera, Flight, at Glyndebourne in the summer of 1999. Robert, aged 19, drowned while snorkeling in Thailand on 21 June that year.

Jonathan never knew Robert but we spent much time talking about him, and There was a child has surpassed all my expectations. Jonathan has completely captured Robert’s spirit. He was a warm, kind, thoughtful, bright, gregarious and fearless person who grasped every opportunity that presented itself. His great compassion, true love of mankind and adventurous spirit continue to inspire all of us who knew and loved him.

There was a child, a modern oratorio, uses a sequence of poems to trace a young life from birth, through childhood to young manhood. Robert would have been delighted that such a joyous piece of music should have been composed to honour him and all the young people who, like him, have been taken from this world too soon.