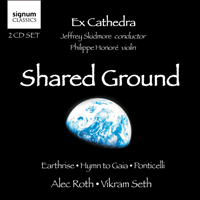 Shared Ground is a set of works by the British composer Alec Roth, featuring several poems and sung texts by the Indian writer Vikram Seth. The title piece of the same name is inspired by Seth’s poetry following a decision to buy and live in the Old Rectory in Bemerton—the former home of the seventeenth century poet and priest George Herbert. Other works on the album expand this idea of a shared home or dwelling, with Earthrise—the reflections of Apollo astronauts on viewing the planet from orbit—and Hymn to Gaia.

'It scarcely seems possible that Birmingham-based chamber choir Ex Cathedra and their founder-director Jeffrey Skidmore entered their fifth decade of performing together in 2009. The group's repertoire has always been wide, but everything that marks out Ex Cathedra as one of the UK's leading vocal ensembles can be heard on this memorable two-disc set of music by Alec Roth: even tone, perfect intonation, clarity of diction, but above all whole-hearted commitment to the material in hand. Skidmore offers authoritative readings of four of Roth's choral pieces, several of which were composed for Ex Cathedra. It is an excellent follow-up to Signum's earlier disc of Roth's Songs in Time of War. Warmly recommended' (Choir & Organ)
'Alec Roth has collaborated with Ex Cathedra since 2007, and five of his works are immaculately sung here by the choir, including Shared Ground, with optional movementsfor solo violin included' (BBC Music Magazine)

'Roth's music is striking for its rich, beautifully crafted choral textures, ecological and metaphysical subject matter, and references to the great heritage of European choral music. This double album features Jeffrey Skidmore's excellent choir and the violinist Philippe Honore. Earthrise is a fabulous. 40-part unaccompanied choral work in three movements with the sort of poly-choral, lushly harmonized climaxes that send shivers down the spine. Just as impressive is Shared Ground, in which Vikram Seth's text pays homage to George Herbert as deftly as Roth's music pays homage to Bach' (The Times)

‘I dodged into a record shop to escape the rain. Over the speakers came intriguingly beautiful music. I just had to know what it was, and came away with the New World Symphonies CD. Sometime later, considering which choir to use for a commission, I remembered Ex Cathedra. But were they as good live as on disc? I heard them in Durham Cathedral, slipping in to observe the rehearsal. The concert was wonderful, but the rehearsal was the deciding factor. Here was a group whose approach to music-making was so inspiring that I wanted to be part of it.’

Alec Roth wrote this about our performance in November 2005. In July of the following year I similarly had sneaked into a rehearsal in Lichfield Cathedral of his 2006 commission Songs in Time of War and had been impressed by the beauty of what I heard, his extraordinary awareness of subtle colours, textures, patterns, and delicate sonorities. And by his constant attention to detail, even at the third performance! We performed his Lullaby at ‘Candlelight’ in 2006 and gave our first premiere, of Shared Ground, in Salisbury in 2007. It was a whirlwind affair!

Ex Cathedra’s relationship with Alec Roth must surely have been made in heaven. Not only has Alec absorbed the enormous scope and vision of our work, writing fluently and with apparent ease for our chamber choir, Consort, XL Anniversary Choir, and Academy of Vocal Music, as represented on this recording, but he also alludes with great awareness to many of our musical influences—Poulenc, Tallis, Latin America, and Bach. There is also the undeniable strain of Englishness which runs through his music and our performance style, regardless of our declared eclectic influences.

Ex Cathedra has performed Alec’s music in over 30 concerts since 2007. We have commissioned two works, given premieres of four pieces, and have another major commission planned for 2012. Alec Roth’s music is relatively simple, but strong, sturdy and passionate, written from the heart, and the choir loves it! It is of consistently high quality with moments of absolute genius. Its deceptive simplicity demands our full attention and is rewarded by close study. We also share an interest in languages, whether biblical, Latin, English, contemporary, or from the Homeric or Orphic traditions. Along with Quechua, Nahuatl, Church Slavonic, French and Latin, we can now add Ancient Greek to our list of linguistic adventures!

The relationship is sure to continue with many more performances and recordings.