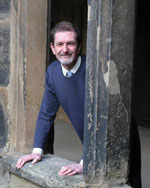 born: 1948
country: United Kingdom
Composer Alec Roth is probably best known for his collaborations with the Indian writer Vikram Seth, which include the opera Arion and the Dolphin, the BBC Proms commission Earth and Sky for children’s choir, and numerous songs and song-cycles. Other works include four commissions for the Academy of St Martin in the Fields: Departure of the Queen of Sheba, Nocturne, Concertino Piccolo and Concerto for Guitar and String Orchestra; and, most recently, a Second String Quartet for the Allegri Quartet, and My Lute & I, a song cycle to words by Thomas Wyatt, the latest in a string of works for tenor Mark Padmore and guitarist Morgan Szymanski.

Between 2006 and 2009 he completed a sequence of four major works in collaboration with Vikram Seth and violinist Philippe Honoré, co-commissioned by the Salisbury, Chelsea and Lichfield Festivals. The first in the series, Songs in Time of War, for tenor, violin, harp and guitar is now available on CD on the Signum label. The second, a pair of works—Shared Ground for unaccompanied choir and Ponticelli for solo violin—was premiered in 2007 and marked the beginning of his ongoing fruitful relationship with Ex Cathedra and Jeffrey Skidmore. The third, The Traveller, a 50-minute oratorio on the theme of the Ages of Man for violin, tenor, choir, children’s choir and orchestra received its first performance in Salisbury Cathedral in May 2008. The series was completed with Seven Elements for tenor and piano, and Seven Elements Suite for violin and piano in 2009.