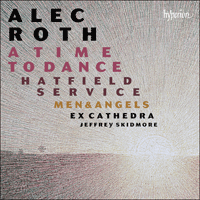 A Time to Dance & other choral works

Alec Roth’s new cantata is a celebration of times and seasons, and a joy to hear. Also included are new settings of the Magnificat and Nunc dimittis and of George Herbert’s Antiphon ‘Praised be the God of love’.

‘In terms of both the music and the performances this is a very fine disc’ (MusicWeb International)» More
‘There is no doubt that Alec Roth’s music, both in this work and in others, whilst refusing to duck the thornier issues that confront us, seems calculated to make us glad to be alive. What more can we ask of art in the 21st century?’ (MusicWeb International)
‘Here is a an absolute pearl of stunning music which is superbly recorded and guaranteed to give hours of sublime listening pleasure’ (Elite)» More
‘The Ex Cathedra choir are on top form. This would be worth seeing in a live performance—I would think there would be many possibilities for imaginative staging’ (AndrewBensonWilson.org)
‘[A] thoughtful and meticulous delivery’ (The Whole Note, Canada)» More
„Die Solisten sind gut gewählt und beeindrucken mit einem affektreichen Singen, das diese Musik nicht nur verträgt, sondern geradezu verlangt. Auch der Ex Cathedra-Chor mitsamt Instrumentalensemble ist tadellos“ (Pizzicato, Luxembourg)» More

A Time to Dance was first performed in Sherborne Abbey on 9 June 2012 by Ex Cathedra, conducted by Jeffrey Skidmore. The work was commissioned to mark the fiftieth anniversary of the Summer Music Society of Dorset, founded by its President and Artistic Director, Dione Digby, in 1963. The brief was to provide a large-scale, celebratory work, reflecting the passage of time and fifty years of music-making. The seed that set my creative juices flowing was the text which Lady Digby suggested as a possible starting point—the well-known passage from Ecclesiastes which I have used for the opening Processional. This lovely, profoundly human text provided the four key themes which permeate the whole work: times; seasons; love; dance.

The diurnal cycle of the hours and the annual cycle of the seasons are firm favourites with poets, offering as they do rich possibilities for metaphor. I decided to conflate the two cycles to make a four-part structure: Spring Morning; Summer Noon; Autumn Evening; Winter Night, and to characterize each with a different solo voice: soprano; tenor; alto; bass. The overall design is completed by a Prologue and an Epilogue, with different texts but in which the underlying depiction of sunrise by the orchestra and largely wordless choir is identical, so bringing us musically full circle. There are also two additional/optional ‘movements’—‘Times and Seasons’ which the choir sings at the start while entering in procession through the audience, and an After-dance, ‘Proper Exercise’ (more of which below).

I spent a considerable time researching and assembling the text, whittling down over one hundred poems to the final choice of twenty-nine, drawn from a wide variety of sources ranging from Ovid to Aphra Behn. The choice was made not just by the suitability of the texts, but also by how they speak to each other. I followed my usual practice of taking the poems for a walk, listening to their melodies and rhythms, and learning how they might dance. Apart from the text, however, the main influences on the music of A Time to Dance were Shakespeare, Bach and Skidmore.

This work is a culmination of seven years close association with Jeffrey Skidmore and his choir Ex Cathedra, during which they have given many premieres and recorded a double-album of my music (‘Shared Ground’). But just as valuable to me has been the time I have spent sitting in on rehearsals. Their wonderful sound is now deeply ingrained in my mind, so that the music I compose for the choir and for the vocal soloists drawn from its ranks is very much of them and for them. I have learned a great deal from Jeffrey’s inspired and brilliantly accomplished music-making. For example, it was his use of spatial effects in a concert of Vivaldi that gave me the idea for similar deployment of my trumpeters in A Time to Dance—left and right for the cock-crow fanfares cued by Edward Thomas’s words in No 2; distantly spaced for the echo effects of No 5; and all three together offstage in No 19 to represent the radiance of the Evening Star.

The influence of Bach arose from the simple fact that the new work was to be premiered alongside a performance of Bach’s Magnificat, and so it was a given that I would compose for the same forces: soloists, choir, and an orchestra of two flutes, two oboes (each doubling on oboe d’amore), bassoon, three trumpets, timpani, strings and a small ‘continuo’ organ. The only change I made was for the percussionist to put aside Bach’s timpani in favour of a pair of handbells to toll the passing hours, and an array of unpitched instruments to add a dash of colour where appropriate (such as the obbligato parts for desk bell, washboard and dinner gong in No 16). Composing for ‘period instruments’ was a fascinating challenge (most noticeable in the valveless trumpets with their limited range of notes), and I am most grateful to the members of the Ex Cathedra Baroque Ensemble for their advice.

The music of A Time to Dance is designed so that it can be played either on modern instruments or (as in this recording) on period instruments. But apart from the instrumentation I have not made any borrowings from Bach, although I have done something to which he himself was partial—borrowing from Vivaldi, as you may hear on four pertinent (not to say seasonable) occasions, some more obvious than others. I love how Bach’s music dances and I hope that mine does too, although where Bach might move to the rhythms of the gavotte, minuet or bourée, mine are more likely to be milonga, kuda lumping or disco.

One of the things I most enjoy about performances at Shakespeare’s Globe on London’s Bankside is that when the play is over, the actors and musicians cap it with a celebratory after-dance or ‘jig’ in the Shakespearean tradition—a wonderful way of bringing performers and audience together in a communal letting-down-of-the-hair. After spending fifty minutes singing about dance, I thought it would be fun to have my singers lay down their music scores (I ensure they have to do this by giving them some hand-clapping to do), and actually dance. My After-dance sets words by Shakespeare’s contemporary John Davies, in which the very creation of the world itself is accomplished through dance (and, of course music).

This setting of the Magnificat and Nunc dimittis was composed during my residence in 2008 as Visiting Fellow at Hatfield College, University of Durham, and the first performance was given by the College Chapel Choir, directed by Matthew Carlton, with Nicholas Arden (organ) at Evensong on 15 June of that year. These two texts have been subjected to an enormous variety of treatment by a host of composers. For my setting, I wanted to provide something quite simple and functional for everyday liturgical use, perhaps emphasizing the intimate nature of what are essentially the song of a young woman and the song of an old man. The organ part, although it can be played on a larger instrument, is designed for a small chamber organ with just three stops (8’, 4’, 2’), and is written so that it can be played using the left hand only. This leaves the player’s right hand free to direct the choir, turn pages, pull out a stop, pop in a peppermint, etc.

The setting for unaccompanied choir of George Herbert’s poem ‘Antiphon II’ was made for the George Herbert Festival held in Bemerton, Salisbury and Wilton in 2014, the first performance being given by The Farrant Singers, conducted by Andrew Mackay, in the Double Cube Room, Wilton House on 12 July. Herbert sets his verses out like a play script, with parts for ‘Chorus’, ‘Men’ and ‘Angels’. This works well on the page, but is of no help when the text is sung, so I have entitled my setting Men and Angels to give the listener a clue as to what is going on. The upper voices (soprano, alto) sing the words of the Angels, the lower voices (tenor, bass) the Men, and both groups combine for the Chorus.