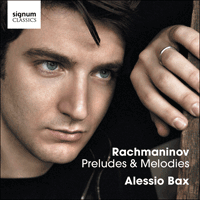 In his second solo piano recital album for Signum, this release further demonstrates Alessio Bax’s dazzling skill and flair in performance and interpretation—this time with Rachmaninov’s piano works. The programme is centered around the Preludes op 23, but takes in a broad selection of his other studies, etudes, melodies and transcriptions in performance, Bax describes the programme as being a collection of ‘visions and landscape'.

‘With this intricate and enterprising recital the wondrously gifted Alessio Bax fulfils, in his own words, a long-cherished dream … these include his own arrangement of the Vocalise where, without surplus decoration (as in the Zoltán Kocsis transcription), he finds all of the composer's dark-hued melancholy, playing with an impeccable sense of vocal line and with an intense and stylish rubato' (Gramophone)
'In this homage to Rachmaninov, the pianist brings rare sensitivity to 23 Preludes, two teenage compositions, two very late ones, and Bax’s own arrangement of the Vocalise. The qualities he admires in Rachmaninov’s playing—lack of ego and a golden tone—are here in abundance' (The Independent)

Pianist-composer Sergei Rachmaninov (1873-1943) sparked controversy from the beginning. Was his music merely “artificial and gushing”, as the 1954 edition of the Grove Dictionary of Music stated—and popular, as fellow musician Percy Grainger asserted, only because of its complete “absence of the experimental and the iconoclastic”? Or was Russian composer Cesar Cui more on the mark when he claimed that Rachmaninov was at times too odd, adventurous and downright ugly?

The man’s pianism was equally contentious: shaped by a unique personal vision, his interpretations nevertheless managed to sound inevitable, as well as technically spellbinding. Yet, this somber, introspective artist—Igor Stravinsky described him as a walking, six-foot scowl—was accused of being too cerebral. “His musical personality is that of a scholar and gentleman,” came one report in 1919, which compared him to a compatriot, Sergei Prokofiev, whose “huge, ungainly hands smote the keyboard with crude and cruel vehemence, while his music proved itself to be a Satanic orgy of twisted rhythms and nerve-racking dissonances”. If Prokofiev evoked the wildness of a drunken Cossack, Rachmaninov’s compositions, and his playing, were always models of elegance.

Nevertheless, the force of his individual vision and the uniqueness of his sound are unmistakable. Rachmaninov’s music is filled with Russian soulfulness and Romantic yearning, soaring melodies and lush, tug-at-the-heartstrings harmonic textures. It’s no surprise that many of his tunes ultimately became the melodies of popular songs (such as the ravishing Full Moon and Empty Arms). Listen to Alessio Bax’s own transcription of Rachmaninov’s wordless song, Vocalise on this recording, and the sense of enchantment he inspired becomes palpable.

In a nod to critics who found him not cutting edge enough, he once confessed that he was “organically incapable of understanding modern music”. But modern audiences certainly understood him. His early Prelude in C sharp minor, written while still a teenager, became so popular that he faced demands for it everywhere he appeared. The piece took on various nicknames around the world, including “The Day of Judgment”, and “The Moscow Waltz” [sic]. Like Beethoven, with his “Moonlight” Sonata, that initial success turned out to be so unrelenting it began to feel like a scourge.

One key to the arguments over the artistic value of Rachmaninov’s music was a cultural shift that marked the arrival of the modern age. Human feeling, in the form of effusive sentimentality, was a treasured value in the nineteenth century. By the twentieth century, the aesthetic goal had become the more sober ideal of “authenticity”. As critic Lionel Trilling pointed out, the very idea of earnest emotion became suspect. Though Rachmaninov’s works were impeccably crafted, they served as vessels for songs of the heart—produced at a time when budding roses were regarded as far less poignant than their thorns.

Even detractors recognized his technical mastery, however, which became evident early on. As a composition student, Rachmaninov so impressed a school examination board that they decided to give him the highest grade—a five plus—until Tchaikovsky intervened and “added three more plus signs—above it, below it and to the side of it”, he recalled. Nevertheless, the composer, racked with insecurity, succumbed to depression easily. After the critical failure of his first symphony, he famously sought the help of hypnotist Nicolai Dahl. Those sessions with Dahl miraculously opened Rachmaninov’s creative floodgates, resulting in his celebrated Piano Concerto No 2, one of the most tuneful works ever written.

His Preludes, Op 23, are cut from the same cloth as that beautiful concerto (note, especially, the themes of numbers 6 and 10). Any pianist wishing to tackle them, however, has to contend with a number of challenges. The first results from the size of Rachmaninov’s hands, which allowed him to span a large section of the keyboard. It often makes his writing impossibly difficult. Then, there are the intricate, finger-breaking moments that require not just superior dexterity, but the ability to separate various elements in a complex texture—bringing out a tightly woven melody, for example, from its busy accompaniment. Finally, there is the task of conveying the emotional narrative of each piece, striking a delicate balance between structural clarity and poetic ardor.

Of these ten preludes, the first and last seem to serve as elegiac bookends. The works between display a colorful canvas with innumerable, nuanced brush strokes. Prelude No 1, with its sad tone and trademark Rachmaninov-ian rising and falling chromatic figures, requires a lot of the pianist. The short phrases must be shaped into an organic whole; the execution requires hand crossings and subtleties of balance. Prelude No 2 often reminds listeners of Chopin’s dramatic “Revolutionary” Etude in its use of bold, sweeping arpeggios. No 4, a kind of cradlesong, displays Rachmaninov’s ease in using all the compositional tools in his chest as layers of melody, counter-melody, imitation, and variation all blossom across the piano keys.

The most famous piece in the set is perhaps the fifth one, which is in many ways emblematic of the composer’s approach. A rhythmic figure germinates throughout the opening and closing, producing a stirring martial atmosphere, interrupted by a lyrical, serenade-like section, like a plea to a distant beloved. This is music that stirs one’s imagination.

By the time the pianist reaches No 9, a certain amount of fatigue would seem natural. That’s when Rachmaninov demands an athletic tour-de-force through treacherously difficult “double notes”—like a final sprint to the finish line (where the placid No 10, waits, like a sigh, projecting a sense of final acceptance). Rachmaninov’s transcriptions, including those of his own songs, Daisies and Lilacs, along with Mussorgsky’s Hopak, and Kreisler’s Liebesleid and Liebesfreud (Kreisler returned the favour by transcribing Rachmaninov’s Daisies) are delightful examples of music for other forces reconfigured perfectly for piano solo.

Alessio Bax plays all of this music, no matter how daunting, with insight, power, and emotional depth. He brings to mind the reaction of New York critic W. J. Henderson after hearing a Rachmaninov performance in 1930. “There was nothing left for us but to thank our stars that we had lived when Rachmaninov did and heard him,” wrote Henderson. The rest of us can thank our lucky stars that Alessio Bax decided to bring this music to life again through this marvelous recording.

I have been wishing to record a Rachmaninov disc for a long time. One of my earliest musical memories is listening to him play his own recordings. For a time, I felt he was totally incapable of wrongdoing and Rachmaninov became my musical guide. These recordings are still a fixture in my playlists and provide continuous inspiration, regardless of how many times I have heard them.

Rachmaninov was a master of his instrument, but what has always fascinated me is that in spite of his great technique, he was revered for his golden tone. Another striking fact in his recordings is that together with his great personality and all of his idiosyncrasies, I still discern a lack of ego in his playing and a total devotion to the music. I am inspired by Rachmaninov, his music and his playing in my own musical life, and I pay homage to him with this disc.

The wonderful ten Preludes Op 23 form the foundation of this album. Rachmaninov employed his unparalleled knowledge of the instrument to describe ten different images. The incredibly vivid narrative in these amazing works is so evident it is almost palpable. At the same time, the cycle, with the first and tenth preludes functioning as bookends, depicts a beautifully variegated universe of natural landscapes, human emotions and cultural backgrounds.

Lately I have been favouring three-part programs. I find that in music, as in life, one often needs the view of a third entity to obtain a fair balance of parts. This disc is no exception. Two parts are represented by some early student works of Rachmaninov, together with two later pieces, and by a set of transcriptions.

The early works are fascinating. Written between the ages of 11 and 18, one senses the strong influence of Tchaikovsky and the Russian tradition. Yet within these gems one already hears Rachmaninov’s unique language and raw emotions, and considerable demands on the pianist’s technique. The pieces are snapshots of Russian life, as seen by a young musician full of aspirations and very much looking forward to his life. As a stark contrast, I’ve chosen two later works, Fragments and the posthumous Prelude in D minor, which show the darker side of Rachmaninov’s psyche during difficult years. These two miniatures use few notes, and they are full of pathos and powerful silences. This is the music of an inward-looking composer full of doubt and desperation.

Rachmaninov performed a lot of transcriptions, and it was a genre he took seriously. Whether transcribing his own vocal works or those of other composers, he poured out a wealth of imagination, pianistic know-how and soul. Having selected Kreisler, Mussorgsky and two of his other songs for this disc, I also wanted to include a piano version of his famous Vocalise. It is a song I have always loved, not only for its beautiful melody, but for the intense harmonic world in which the melody is set. I looked at various transcriptions, but could not find one that faithfully recreated the original’s character. I humbly offer my own here.

All in all, this disc is the realization of a long-cherished dream. It is a look at the great Rachmaninov from different angles, a brief chronicle of the life and work of the last of the Romantics.