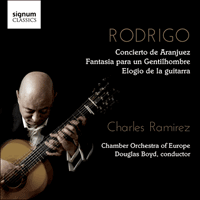 Charles Ramirez is a guitarist of rare skill. A preeminent performer in the generation of guitarists that followed Segovia, he has held the post of Professor of Guitar at the Royal College of Music since the age of 25, raising the profile of the instrument through his concerts and education activities since mid-1970s. This album is the first in a new series of recordings featuring Charles Ramirez and sees him perform works by Joaquín Rodrigo with the Chamber Orchestra of Europe—the Concierto de Aranjuez and Fantasia para un gentilhombre—under conductor and founding member of the orchestra Douglas Boyd. The programme is completed with Rodrigo’s enchanting solo-guitar piece Elogio de la guitara.

'Concierto de Aranjuez sparkles in the hands of Charles Ramirez. Even more impressive is the more virtuosic Elogio de la guitarra, where Ramirez sustains some fiendish fingerwork' (The Daily Telegraph)

Deep inside Joaquín Rodrigo, there was a man from the Golden Age, Spanish to the core. His personality and figure always reminded me of one of those plebeian noblemen that Velazquez, Ribera or Murillo liked to paint. He was shrewd, rapid, and witty…his music is light but not commonplace, it is full of joy and at the same time full of melancholy, it is fresh but not ingenuous…Perhaps for that reason, the most immortal of his music goes hand in hand with the most deeply rooted Spanish traditions: the guitar of Gaspar Sanz, the madrigal, the villancico (Spanish Christmas carol) or the poetry of Saint John of the Cross.
(From ‘En busca del más allá’ by Alvaro Marías; ABC, Madrid, July 7, 1999)

Published in the Spanish press at the time of Rodrigo’s death, this account is a poetically accurate summation of Rodrigo and his music. Imbued with the literature and traditions of his native Spain, it is little wonder that more than 40 of his works include a prominent role for the national instrument, the guitar. Rodrigo, although no guitarist himself, was intimately acquainted with the instrument and its history. Indeed, many of his guitar compositions celebrate the finest guitarists and lutenists of both the recent present and the distant past. His Sarabanda Lejana is dedicated to the ‘vihuela of Luis Milán’, the Concierto de Aranjuez was written for Regino Sainz de la Maza, while Narciso Yepes and Manuel Lopez Ramos are similarly honoured with dedicated works. Naturally, Andrès Segovia, the man who, in the twentieth century, established the guitar internationally and inspired generations of guitarists of every musical hue, was not to be denied, and indeed himself commissioned the delectable Fantasia para un gentilhombre.

Rodrigo was born in Sagunto in the Province of Valencia on 22 November 1901, the day of the Roman Catholic feast of St Cecilia, the patron saint of music (his only child was born on Mozart’s birthday—Rodrigo’s favourite composer). As a result of a diphtheria epidemic he became severely visually impaired in 1905 and attended a college for blind children where his interest in music and literature was encouraged. Having already completed several well-received orchestral and chamber works as a young man, he followed his musical compatriots and forebears, Isaac Albéniz and Manuel de Falla to Paris, where he studied with the fine composer and great teacher, Paul Dukas. There he met Falla who soon befriended the younger man and continually championed his music. The Spanish Civil War left the composer and his wife stranded in Germany in 1936, eventually returning to Paris, where in 1938, and with the encouragement of the guitarist, Regino Sainz de la Maza, Rodrigo began composing the Concierto de Aranjuez. The success of the concerto secured the composer’s fame and numerous exalted posts, high honours, lectures, piano recitals, publications and commissions followed in the ensuing decades. Rodrigo died in 1999 having a few years before been raised to the Spanish nobility as Marqués de los jardines de Aranjuez.

Rarely has an avowedly classical piece of music, and especially one written in the twentieth century, enjoyed such spectacular critical and especially popular success as has Rodrigo’s Concierto de Aranjuez. Such is its exalted place in the popular imagination that it seems strange to learn how young it is—a mere 70 or so years. The concerto is to the guitar repertory what Tchaikovsky’s First Piano Concerto or Mendelssohn’s Violin Concerto are to the repertoire of their own respective instruments, and like the Tchaikovsky it has spawned numerous musical arrangements and popular interpretations, most strikingly from the world of jazz. Miles Davis and Gil Evans famously arranged the slow movement of the Concierto on the album Sketches of Spain and The Modern Jazz Quartet recorded their version a number of times. Songs based on or quoting the Concierto have also been recorded by the likes of The Shadows, Fairuz, Demis Roussos, Led Zeppelin and Buckethead. Known in the brass band world as ‘Concerto de Orange Juice’, it has permeated the movies (Brassed Off), and television and radio advertising to an extraordinary degree. Today the internet is swamped with performances of all kinds, with on-line guitar tablatures enabling budding guitarists to follow and learn the piece at their own pace.

The work was first performed at the Palau de la Musica, Barcelona on 9 November 1940, with Regino Sainz de la Maza, the work’s dedicatee as soloist and César Mendoza Lasalle conducting the Barcelona Philharmonic Orchestra. Many press commentators immediately recognised its importance to the country’s musical canon, praising its fusion of classical music with distinctly Spanish influences. Six years later Narciso Yepes was introduced to Rodrigo, who gave him the manuscript. Rising to the challenge of the new and formidable technical difficulties in the guitar part, Yepes’ performances in the late 1940s, when still only in his early 20s, brought international fame to the work as well as recognition of his own talent. His first performance in Paris brought forth the following rave review from the respected journal, The Strad

A concert with the Paris Conservatoire Orchestra…included a splendidly restrained performance with Narciso Yepes of Joaquín Rodrigo’s Guitar Concerto. This must surely be the only successful concerto written for the instrument. The beautiful balance of ideas and harmonies, the sensitive atmosphere and orchestration are an ever fresh delight.

As with many classical piece which have assumed international popular success, the concerto has now and then been less appreciated by critics than by audiences. Certainly it avoids the extremes of some twentieth-century music of the period, but it is far from conservative. Its melodies, idiom and textures spring from Rodrigo’s deep knowledge and love of Spanish culture, folklore and history and his distinctive musical voice and deft individual handling of orchestral sonority make for a work which is both modern and, as Rodrigo put it, ‘neo-casticisma’—‘faithful to tradition’. The great British guitarist, Julian Bream, had this to say about Rodrigo on his death: ‘The success of Concierto de Aranjuez has somehow eclipsed Rodrigo’s other works. They need to be brought out and rediscovered, and Rodrigo should not be considered the author of only one work because the future will undoubtedly reveal other treasures to us’. More than ten years on, Rodrigo’s works are being praised, performed recorded and rediscovered as never before—at least in part due to the fame of the Concierto.

While Rodrigo gave the world its first modern masterpiece for guitar and orchestra, it was Andrès Segovia, as a performer, who kick-started the guitar’s entry onto the world stage. His influence can hardly be underestimated, and the range of compositions edited by, or specifically composed for him is extensive and influential. Segovia was forced to leave Spain during the Spanish Civil War and was thus not available to champion the Concierto de Aranjuez. In fact he never played the work, although he claimed to like it. On being asked by Charles Ramirez why he had not played it, he commented that he felt some of the guitar part was not well written, being too high to bring out the true sonority of the guitar. However, Rodrigo did write the Tres piezas españolas and, more importantly, the Fantasía para un gentilhombre specifically for Segovia in 1954. Rodrigo’s wife, Victoria Kamhi describes the genesis of the Fantasia:

It was in 1951 that Segovia asked Joaquín for a new concerto for guitar and chamber orchestra. In order to exchange ideas, he came one summer afternoon to our chalet in Torrelodones and stayed to have supper…After the triumph of Concierto de Aranjuez in Paris, Joaquín felt no great desire to compose another concerto, and he postponed the work. One day, however, he told me that he had thought it over and that he would write a “Suite” on themes collected by Gaspar Sanz, the famous guitarist of the court of Felipe IV. The title would be Fantasía para un gentilhombre, and he would also dedicate it to Andrés Segovia, whom he greatly admired, as a tribute…At Christmas, Andrés Segovia unexpectedly came to our house, asking to look over the score…Just as I was accompanying him at the piano in the first measures, there was a power failure, and the whole apartment was plunged into darkness. Thanks to two candles, we surmounted the difficulty. The work played marvellously under the great artist’s fingers, and the tenuous light lent an archaic atmosphere, very fitting, above all for the ‘dance of the torches’.

Gaspar Sanz was a seventeenth-century composer, priest and guitarist, particularly renowned for his three-volume pedagogical treatise on the classical guitar, Instrucción de musica sobra la guitarra española. Rodrigo selected a number of themes by Sanz, expanding them into a 20-minute concerto for guitar and orchestra, uniting Segovia and Sanz through the centuries with the marriage of ancient dances and his own brand of twentieth-century lyricism. The gentleman of the title is normally assumed to be Segovia, but presumably also refers to Sanz as a ‘gentleman’ of the court. The first performance of the work, on March 5 1958, with the San Francisco Symphony under the baton of Enrique Jordá, was another great success for both composer and soloist.

His concertante compositions aside, Rodrigo wrote some two dozen other works for solo guitar. Amongst these, the Elogio de la guitarra, composed in 1971, is a remarkable testament to the breadth and depth of Rodrigo’s understanding of Spain’s national instrument. This Ode (or Tribute) to the guitar is a substantial work in the manner of a sonata and demands a formidable technique from the performer. It seems to have been originally conceived as a work for guitar and orchestra by the Italian Composer, Mario Castelnuovo-Tedesco, reflecting facets of the guitar and, naturally, also of Spain itself: nobility, church polyphony and, of course, the dance. Unfulfilled at his death, Castelnuovo-Tedesco’s idea was proposed to Rodrigo by the guitarist, and eventual dedicatee, Angelo Gilardino. Rodrigo kept to the original plan and title, but decided against including orchestral accompaniment or explicit movement titles. The composer himself wrote of the piece, ‘My intention was to demand a precise and infallible technique of the guitarist, as well as a profound sensitivity to the framework and thematics of the music. I have composed my ‘challenge’ to the guitarist…’—and a challenge it most certainly is. The opening sonata form movement expresses the nobility of the guitar in its use of grand chordal movement, while its successor is described by Rodrigo as evoking an ‘ancient Castilian cathedral’. The final movement makes what Rodrigo’s wife described as ‘diabolical requirements’ on the player and dances on to a dramatic and thrilling climax—a suitable homage to the instrument for which the composer helped create a new golden age.