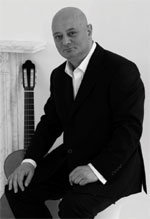 Charles Ramirez was taught to play the guitar in his native Gibraltar by William Gomez, himself a pupil of the renowned Narciso Yepes. He made his debut on London’s South Bank in 1974, his final year as a student of the Royal College of Music, where he had been the first guitarist chosen to play a concerto—the Concierto de Aranjuez. He soon established a reputation as an artist of rare skill.

His repertoire is wide-ranging and he has given the world premiere of large-scale compositions by leading composers such as Erika Fox, Jeremy Dale-Roberts, John Lambert and Naresh Sohal.

He was appointed Professor of Guitar at the RCM aged 25, a position he has held ever since and where he also teaches at the college’s Junior Department. His influential teaching led to the publication of the highly successful Technical Development for Guitarists, which is considered to be a reference manual for many teachers and students.