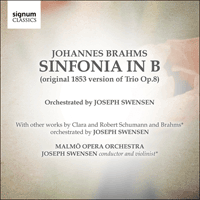 Sinfonia in B is Joseph Swensen’s orchestration of the little-known original version of Brahms’ B major piano trio. In Swensen’s own words: 'Completed in 1854, it is the largest and arguably the most important of Brahms' published early works, yet it remains nearly unknown to most musicians and music-lovers alike'. The original Opus 8 is, for me, intriguing for many reasons. Not only is it a work of extraordinary quality and emotional depth, written by a composer just 21 years of age, but it is a quintessential example of Brahms' ultra-romantic and forward looking early style.'

This album also explores the young Brahms' connection with Robert and Clara Schumann, with orchestrations and performances (as a violin soloist) by Swensen of miniature works by both composers—as well as extracts from the ‘F-A-E’ sonata (a joint composition by Brahms, Robert Schumann and Joseph Joachim based on the motto Frei aber einsam/free but lonely—Joachim’s personal motto).

'Clear-textured orchestrations by Swensen, whose violin playing is terrific. Intriguing: the Brahms Trio's early version contains the Beethoven quote that Schumann used in his Fantasie in C' (BBC Music Magazine)
'More welcome Brahms orchestrations, adding more completely persuasive orchestral works to the composer’s existing body of music. The orchestration here by the conductor Joseph Swensen is completely in the spirit of Brahms. The Sinfonia in B is Swensen’s orchestration of the little-known original version of Brahms’ B major Piano Trio.' (CD Choice.co.uk)

The work, which I have entitled Sinfonia in B, is my orchestration of the little-known original version of Brahms’ B major piano trio. Completed in 1854, it is the largest and arguably the most important of Brahms’ published early works, yet it remains nearly unknown to most musicians and music-lovers alike.

This phenomenon is the result of Brahms’ apparent dissatisfaction with the work (hence his revision of it over three decades later), and his rather strange decision to list the revised work as Opus 8 (the opus of the original) in spite of the fact that it is nearly 75 percent newly composed music and should have a listing closer to Opus 110! Yet, in a letter to his publisher Fritz Simrock (dated 13 December 1890) Brahms seems to cite commercial and technical reasons for undertaking the revision rather than purely artistic ones: ' … with regard to the refurbished trio … I simply want to say that the old one will continue to sell poorly not because so much of it is ugly, but because so much of it is unnecessarily difficult.'

The original Opus 8 is, for me, intriguing for many reasons. Not only is it a work of extraordinary quality and emotional depth, written by a composer just 21 years of age, but it is a quintessential example of Brahms’ ultra-romantic and forward looking early style; a style deeply influenced by his mentor Robert Schumann, whose bizarre and wonderful violin concerto was completed just the year before Brahms’ Opus 8 was published. That very year saw the young Johannes Brahms in the company of even more radical voices than that of his mentor. In his letter to Joseph Joachim (dated 7 December 1853) Brahms writes: ‘Berlioz praised me with such exceeding and heartfelt warmth that others meekly repeated his words … Liszt is coming back on Monday.’ (One can hardly avoid thinking of Liszt and Berlioz when one hears the crazed fugue in the first movement of Brahms’ 1854 trio.)

This early period came to an abrupt ending when Schumann attempted suicide for the first time. The original Opus 8 trio was to be the last work Brahms wrote before a hiatus of six years in which he published not a single piece of music! When comparing the original Opus 8 with the revised version, one can clearly hear that nearly all of the fantasy-filled wandering and subjectively emotional 'Schumannesque' music of the original was replaced by typically late period Brahms: concise and intense, an economical pursuit of the classical ideal. This is a perfect example not only of Brahms' conscious rejection of Schumann and of course Wagner, but also of his adversity to the whole German-Austrian romantic musical revolution which found its ultimate and inevitable end just over half a century later in Schoenberg’s absolute annihilation of tonality!

My original impetus for writing this orchestration was to somehow resurrect this great work, and thereby share my love for it with those who may never have the opportunity to hear it otherwise. The greatest dilemma for me was how to treat Brahms’ extraordinary virtuoso piano writing. This material, transcribed for the orchestra could never resemble Brahms’ own very conservative orchestration style. My choice was between emulating Brahms’ own orchestrations›all products of his later post-Schumann period›or being true to the material itself. I chose the latter, with great enthusiasm, to such a degree that every single note which exists in the original has found its way into the orchestral version. The result is an orchestration where the abilities of every player are stretched to the limit and where the orchestra as a virtuoso instrument is exploited to the same degree that Brahms exploited the limits of the piano. More importantly, it results in a more ‘forward-looking’ orchestral sound world than one is accustomed to in his later orchestral works. My hope is that this orchestration acts as a mirror reflecting the mentality of this surprisingly radical, idiosyncratic and incredibly romantic, 21-year-old Johannes Brahms.

Certainly as friendships between musicians are concerned, the camaraderie shared by Robert Schumann, Clara Schumann, Johnannes Brahms and Joseph Joachim was among the most fruitful in all of music history. Brahms had met the Schumanns only weeks before being approached by Robert Schumann with the idea of writing the scherzo to a four-movement sonata to be presented as a gift to their beloved mutual friend Joseph Joachim. Robert Schumann and his student Albert Dietrich would be the other composers taking part in the collaboration. Joachim had taken the phrase 'Frei aber einsam' ('free but lonely') as his personal motto and the idea was for all the composers to make prominent usage of the musical notes F-A-E. I have chosen to orchestrate the piano parts of the two strongest movements of the F-A-E Sonata: Schumann’s Intermezzo and Brahms’s Scherzo. It was just a few months later that same year that Clara Schumann completed her 3 Romances for violin and piano also a gift for Joseph Joachim. Perhaps her obvious exclusion from her husband’s project of the F-A-E Sonata inspired her to make her own even more personal gift to her dear friend. These are deeply touching, often intimate miniatures, each with its own very distinctive mood. Joseph Joachim and Clara Schumann performed these pieces many times during their lives together, most famously to King George V of Hannover, who was 'completely ecstatic' about them. In my orchestrations, I have tried to celebrate the composers themselves by imagining how they might have played these pieces on the piano, the colors and timbres they might have evoked (the solo violin parts are unchanged from the originals).

Translating this imagined sound world to that of an orchestra was not only my way of expressing my love for these works and these artists, but it is also my attempt to help them to become more widely known and appreciated.