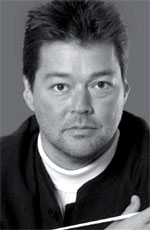 see also Joseph Swensen (violin)
Joseph Swensen has rapidly established himself as one of the most exciting talents to have emerged from amongst today’s younger generation of conductors. This was recognised by his appointment in 1996 as Principal Conductor of the Scottish Chamber Orchestra, with whom he has since enjoyed a long and fruitful relationship.

Joseph Swensen’s enthusiasm for new music has seen him conduct the SCO in premieres of major works by composers such as James MacMillan, Einojuhani Rautavaara, Sally Beamish, Karin Rehnqvist and Eleanor Alberga. Swensen and the Orchestra have toured extensively in the USA, Far East, Spain and Portugal, and Swensen has also made his debuts at the Edinburgh International Festival, BBC Proms and Aldeburgh Festival with the Orchestra. In 2002, they returned to tour the USA, giving highly-acclaimed performances at Mostly Mozart in New York, at Tanglewood and Ravinia. Joseph Swensen and the Orchestra have also embarked on an extensive series of recordings for Linn Records. The first disc—Mendelssohn Violin Concerto and Symphony No 3 (Linn CKD 205)—featured Swensen as both conductor and soloist.

Joseph Swensen was Principal Guest Conductor of the BBC National Orchestra of Wales from 2000-2003, and, in addition to numerous concerts in Wales, has made several appearances with them at the BBC Proms in recent seasons. “Swensen is the complete musician: a virtuoso violinist and composer as well as conductor, ostensibly well suited to Mahler [Symphony No 6]. From the very first sinister opening march, his approach was one of taut, thrusting vigour, and while the music is shot through with melodic material that represents glimpses of a soaring but seemingly unattainable joy, this mitigated little against the overall impression of a relentless underlying force” (The Guardian, London). He continues his relationship with the Orchestra, returning regularly over forthcoming seasons.

Before deciding to dedicate himself solely to his conducting career, Joseph Swensen enjoyed a highly-successful career as a professional violinist, appearing as a soloist with the world’s major orchestras. Nowadays his occasional appearances as a violin soloist are a natural extension of his work as a conductor, playing and directing concerti with the SCO and other orchestras with whom he enjoys a particularly close relationship. His devotion to chamber music results in frequent performances in that genre, often with members of the orchestras he conducts.

Joseph Swensen was born in 1960 in New York (an American, of Norwegian-Japanese descent); he now lives in Copenhagen.