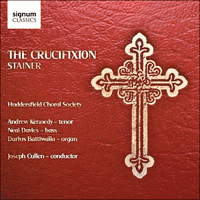 Founded in 1836, the Huddersfield Choral Society has long been a major part of the town’s vibrant musical tradition. Under a succession of distinguished principal condutors and chorus masters it has developed an international reputation as the UK’s leading choral society. Although enjoying a close working relationship with any leading professional orchestras and conductors, the Society is a independent and self-governing amateur choir, drawing talented singers from a wide area across Yokshire and the north of England. This is the Huddersfield Choral Society’s fourth release with Signum Records.

'The Crucifixion was conceived—that is, to be sung with romantic, emotional conviction, by a choir that revels in the sound of rich, chromatic harmony' (Gramophone)
'A beautiful and dramatic performance of a work much criticised, but with an ever-enduring popularity' (Choir & Organ)» More

In the monumental Victorian era, with Britain ruling the waves and at the zenith of its economic, military, industrial and imperial power, artists, architects, poets and polymaths seemed to be ten-a-penny. The likes of Paxton, Alfred Waterhouse and George Gilbert Scott were erecting the grandest or most innovative structures, from sophisticated private residences and places of worship to the grandiose schemes of Whitehall and the Crystal Palace. Alma-Tadema, Burne-Jones, Millais and co. visited classical poise, pre-Raphaelite beauty and artistic controversy on the Royal Academy, while Dickens, Wilde, Tennyson, Carroll and the Brownings measured conservatism with outright scandal, either on the stage or in published volumes. And then there were others, such as John Ruskin and William Morris whose brilliance shone over numerous arts and disciplines.

While Great Britain was making the running in most of the arts and crafts, music seemed barely to be on the agenda—at least so far as home-grown talent was concerned. Britain, the Germans’ ‘Land without music’ in the Nineteenth Century, certainly comes up short when musical luminaries are the name of the game. This is hardly to say that the British Isles were not awash with great music—they certainly were, but little of it was indigenous. While Haydn, Mozart and Beethoven had rapidly become staples of the orchestral, chamber and instrumental classical canon, music for religious purposes had been somewhat stifled ever since the Puritan tirades against liturgical and theatrical music. The oratorios of Handel neatly side-stepped these issues by being neither liturgical in initiation nor purely theatrical in conception. Instead they were regarded as merely sacred and dramatic, which seemed even to please everyone, even many a hard-line Nonconformist. This template was set before Victoria became monarch and Handelian oratorio, rather than opera, was setting the musical pulse of the nation. By the time Victoria and Albert were Queen and Prince Consort, Mendelssohn was already well known in Britain, having edited a few of Handel’s oratorios for publication in London and was busily breathing Bach’s St Matthew Passion back to life again in the public consciousness. His oratorio, Elijah, composed for the Birmingham Festival in 1846, and now with an English text, further endeared him to the British public and helped re-invigorate English composers into moving toward the European mainstream.

This was the musical scenario into which John Stainer was born and bred: Handel and Mendelssohn remained the staple diet, supplemented by a host of native English oratorios often written in pale imitation of the two German titans. Stainer was born into a family of modest means in Southwark on 6 June 1840 and was taught organ from an early age by his schoolmaster father. By 1848 the young Stainer was a Probationer at St Paul’s Cathedral Choir School, and was elevated to a full chorister the following year. He quickly became one of the leading solo boys and is known to have sung at some extremely prestigious events, such as the funerals of artist J.M.W. Turner and the Duke of Wellington, in 1852. In 1854 he was appointed organist at the Church of St Peter & St Benet, Paul’s Wharf, London. Two years later he met Sir Frederick Ouseley, then Professor of Music at Oxford who, as a prodigious youth, had impressed no less a figure than Mendelssohn. Ouseley used his considerable social rank and wealth for the good of music and recognised real talent in Stainer, quickly offering the sixteen-year-old the post of first organist at St Michael’s College, Tenbury. This was quite a break for the young Stainer, as he was now effectively under Ouseley’s guidance. Later in life, he was ever keen to acknowledge this period as of the utmost significance in his musical development. Now well established as an organist, he soon passed through various posts at St Edmund Hall and Magdalen College, Oxford, and even picked up a few degrees along the way, prior to landing the plum job as organist to St Paul’s Cathedral, in 1872.

It was at St Paul’s where Stainer would make his mark as a composer of cathedral music and hymns. He completed many a service for use in St Paul’s and anthems and hymns which were extremely popular amongst the Anglican community of his day. Composition aside, he was a tireless worker for those around him, raising the standard of the choir to new heights, augmenting its numbers and making sure that salaries were raised to appropriate levels. He also introduced weekly choral celebrations of communion and processions while providing adequate rehearsal time to cope with an expanded and enhanced repertory. His good works must have been well noted in high places as in 1881 he was made principal of the National Training School for Music and his generous offices were rewarded by Queen Victoria in 1888 with a Knighthood. In the same year he resigned his post at St Paul’s due to his declining eyesight (he was already blind in one eye due to a childhood accident), though by the next year had rested enough to take on the post of Professor of Music at Oxford. Once again his administrative and scholarly skills were employed to great effect and he retained the post for a decade, retiring in 1899. Two years later, he died of heart failure, on 31 March, whilst holidaying in Verona. The Crucifixion may be his only tangible musical legacy, but he is perhaps even better remembered by musicologists for his contributions to the discipline. His edition of Early Bodleian Music is recognised as the earliest attempt by an English scholar to investigate music before the great Renaissance figures of Palestrina, Lassus, Victoria and Tallis. Other volumes on musical terminology, the organ, composition, harmony and choral music sold, in total, hundreds of thousands of copies during Stainer’s lifetime, the royalties leaving him a very wealthy man in later life. As a founder member of the Musical Association, President of the Royal College of Organists and many other professional bodies, and co-founder of august societies and institutions such as the Oxford Philharmonic Society and the Associated Board of the Royal Schools of Music, he worked tirelessly for the improvement of music appreciation and education, and enhanced standards throughout the country as a whole.

The Crucifixion was composed in 1886-87 and first performed in St Marylebone Parish Church on Good Friday 1887. The work’s dedicatee, William Hodge was a pupil and friend of the composer and, aside from being the assistant sub-organist at St Paul’s was also the organist at St Marylebone (The church has kept up a fine tradition of performing the oratorio on every Good Friday since the premiere). Scored for tenor and bass soloists, choir and organ, Stainer conceived The Crucifixion as ‘A Meditation on the Sacred Passion of the Holy Redeemer’, a work that would not be too taxing for the average village choir and which might also immediately engage an audience. Given its immense popularity, Stainer obviously succeeded in the latter. As to the forces: while the choir parts are more than manageable for a decent amateur choir, the organist has to be more than competent, and the singers, who carry most of the narrative, need to be quite exceptional amateurs and preferably professionals. The structure of The Crucifixion is inspired by J.S. Bach, the scheme of arias recitatives, choruses and chorales (hymns) reflecting that of the St John and St Matthew Passions. Unlike the passions, however, there is no orchestra to provide light and shade to accompaniments and add piquancy or punch to the drama. It is testament to Stainer’s economy of scale and his deft organ writing that we are barely aware of a solitary instrument accompanying the choir and soloists. Central to the work’s structure and impact are the five hymns which are interspersed throughout the oratorio. These are intended for congregational participation and are as key to the work’s success as even the most lyrical passages for the solo voices or organ. The congregation is invited to stand for these hymns and so directly take part in a communal celebration at this crucial point in the liturgical year. While the first performance was a success, the libretto, by the Reverend William Sparrow-Simpson would soon attract ferocious criticism and the music has also been vilified down the years. It is true that there are some cloying sentimental passages by Sparrow-Simpson and perhaps, at times, an excess of High Victorian piety from Stainer, too—the ‘Fling wide the gates’ chorus has taken many a critical bashing—but there are many more passages of real beauty and invigorating drama. The Crucifixion can still bat with the best of them every season, its many performances and broadcasts every year at Passiontide gladly attended and participated in with great British gusto.