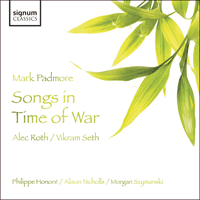 Songs in time of war

The Chinese poet, Du Fu (712-770), received no recognition in his lifetime but is now regarded as one of China’s finest poets. His poems appear in Roth’s work, Songs in Time of War, a stunning compilation of songs from Du Fu’s experiences in civil war China, beautifully arranged for tenor, violin, harp and guitar.

Inspired by a visit to Vancouver’s Chinese garden (in authentic Ming Dynasty style), Roth sketched musical ideas for the four songs, Chinese Gardens. The original version has since been revised for Mark Padmore and Morgan Szymanski who perform for the first time on this recording.

'Roth's oriental-flavoured score may be short of variety but there's a transparent, haunting beauty about it, and the accompaniments for violin, harp and guitar are a joy' (The Times)» More

Songs in time of war
Du Fu (712-770) was born into a noble family which had fallen into relative poverty. His great ambition to serve his country was frustrated by repeated failure in the civil service examinations. He finally attained a minor administrative post but almost immediately the country was plunged into civil war. The Emperor (“The Dragon”, “Son of Heaven”) was forced to flee the capital (Chang’an) and abdicate. Du Fu managed to get his family to safety but was himself captured by the rebels. He later escaped and joined the court in exile. The war dragged on for years and ruined the country—millions were killed or displaced.

Du Fu’s precarious itinerant existence throughout the turmoil of these years provided the inspiration for some of his finest poetry. He wrote about what he saw and heard around him—the lives of his family, friends, neighbours and strangers—with great honesty and deep compassion. He is now regarded as one of China’s finest poets, but received no recognition in his own lifetime.

In 765 Du Fu began a long journey down the Yangtze (the “Great River”) towards his birthplace, which had recently been recaptured by Government forces. Progress was slow and he died before reaching his final destination.

Songs in time of war is the first in a series of four major works commissioned jointly by the Salisbury, Chelsea and Lichfield Festivals, 2006-2009. The first performances were given by Mark Padmore (tenor), Philippe Honoré (violin), Alison Nicholls (harp) and Morgan Szymanski (guitar) at Wilton Church, 8 June 2006; St Luke’s Church, Chelsea, 19 June 2006; and the Lady Chapel, Lichfield Cathedral, 6 July, 2006.

Canción de la luna / Danza de la luna
These two pieces for solo guitar are part of an ongoing series of works by Alec Roth inspired by, written for and dedicated to the Mexican guitarist Morgan Szymanski, which includes Cat Dances (2002), The Unicorn in the Garden (2003) and a Quintet for Guitar and String Quartet (2006). Canción de la luna (Song of the Moon) was first performed at a Wigmore Hall recital on 8 February 2005; its companion piece, Danza de la Luna (Dance of the Moon) was completed in 2006 and is heard for the first time on this recording.

Chinese Gardens
Chinese Gardens is a setting of poems by Vikram Seth which were inspired by visits to four of the famous Ming Dynasty gardens in the Chinese city of Suzhou.

Unlike Vikram, I have never been to mainland China, but during a visit to Vancouver in 1991 I was introduced to that city’s remarkable Chinese garden. Completed in 1986, it was constructed by a team of over 50 artisans from China in authentic Ming Dynasty style, taking four of the original Souzhou gardens as models. By an astonishing coincidence, the four gardens chosen were exactly the same four that appear in the poems. I immediately fell in love with this magical place and spent several hours in the garden sketching musical ideas, but mostly just absorbing its exquisite calm and refined beauty. It was some years before I got around to completing the songs, but the memory of that afternoon remained fresh and inspiring, thus explaining my dedication of this work “to the Dr Sun Yat Sen Classical Garden, Vancouver”.

The first song, The tarrying garden, introduces us to some of the main features of a classical Chinese garden: the covered walks, courtyards, rocks and pools, the poetic inscriptions on whitewashed walls and the characteristic zig-zag paths offering no long vistas, but constantly changing views and impressions. We are also instructed in how to enjoy our visit to the garden: “Meander, tarry, amble, pause, admire”. The second song is a nocturne evoking the atmosphere of the exquisite Master-of-Nets garden on a moonlit night. The third song records the somewhat whimsical observations of a visitor to the Garden of the Gentle waves pavilion. The final song remembers Mr Wang, the self-styled Humble administrator, who (somewhat mysteriously, considering his official income) managed to create one of Suzhou’s most famous treasures. The cycle ends with a gentle walk around this, “the loveliest of all gardens”.

The original version of Chinese Gardens was commissioned by the Chester Music Festival and first performed by Claire Bradshaw (mezzo-soprano) and Craig Ogden (guitar) at the Town Hall, Chester, 13 July 1998. The revised version for tenor and guitar was made for Mark Padmore and Morgan Szymanski who perform it for the first time on this recording.