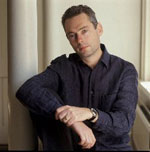 Mark Padmore was born in London and grew up in Canterbury. After beginning his musical studies on the clarinet he gained a choral scholarship to King’s College, Cambridge and graduated with an honours degree in music.

He has established a flourishing career in opera, concert and recital. His performances in Bach’s Passions have gained particular notice throughout the world.

In the opera house he has worked with such theatrically-minded directors as Peter Brook, Katie Mitchell, Mark Morris and Deborah Warner. Work has included Les Troyens at the Théâtre du Châtelet in Paris and Handel’s Jephtha at WNO and ENO. He also played Peter Quint in an acclaimed BBC TV production of Turn of the Screw. He has recorded the title role in La Clemenza di Tito with René Jacobs for Harmonia Mundi.

In concert he has performed with many of the world’s leading orchestras including the Berlin, Vienna and New York Philharmonics, the Royal Concertgebouw Orchestra, the LSO and BBCSO. He makes regular appearances with the OAE with whom he conceived a project exploring Bach’s John Passion which took place in Aldeburgh and London in 2005. In 2007 he made his debut with the Philadelphia Orchestra under Rattle. He has toured with the Hallé Orchestra as soloist in Britten’s Serenade for Tenor, Horn and Strings conducted by Mark Elder.

He has given recitals in Amsterdam, Barcelona, Brussels, Milan, Moscow, New York and Paris. He appears frequently at the Wigmore Hall in London. As well as his regular collaborators Julius Drake, Roger Vignoles and Andrew West he works with many internationally renowned chamber musicians including Natalie Clein, Imogen Cooper, Till Fellner and Paul Lewis.

He has made many recordings including the Bach Passions with Herreweghe and McCreesh, Bach Cantatas with Eliot Gardiner and Herreweghe, Haydn Masses with Hickox, Don Giovanni with Harding and operas by Rameau and Charpentier with Christie.