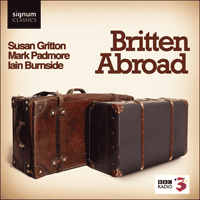 Britten’s extraordinary skill and fluency for setting his native language has sometimes obscured his flair for his settings of foreign poetry; some of his very finest are in German, Latin, Italian and Russian.

Susan Gritton and Mark Padmore perform these songs with vigour, marvellously accompanied by Iain Burnside and do great justice to songs which many would regard as being the most distinctive and very finest examples of Britten’s art.

'What an inspired idea not only to bring together Britten's mature foreign language songs, but also to have the programme shared by two of Britain's keenest and brightest singers … So delight and spiritual depths go hand in hand' (BBC Music Magazine)» More

'The superior quality of the music-making here matches that of the music itself. A great album' (Classic FM Magazine)» More

Britten’s extraordinary skill and fluency for setting his own native language has sometimes obscured the brilliance with which he embraced a wide range of foreign poetry throughout his career. In fact Britten left a series of exquisite settings, some of his very finest, in French, Italian, Latin, German, Russian, Scots dialect and Medieval English; and the role-call of poets attests to the diversity and sophistication of his literary tastes, including the work of Victor Hugo, Paul Verlaine, Artur Rimbaud, Michelangelo Buonarroti, Friedrich Hölderlin, Johann Wolfgang von Goethe, Alexander Pushkin, Bertolt Brecht and William Soutar. The earliest of these works (written when Britten was just fourteen) was the Quatre chansons françaises, settings of Hugo and Verlaine for high voice and orchestra, written in the summer of 1928 for his parents’ twenty-seventh wedding anniversary. Les Illuminations followed a decade later; Latin settings were a constant throughout his career, for his many liturgical settings and notably in War Requiem and the Cantata misericordium; we find Scots dialect in his Souter settings, Who are these children? and his authentic response to the challenge of early English texts is demonstrated in his mystery-play settings, Canticle II: Abraham and Isaac and Noye’s Fludde, and profoundly so in one of his very last works, the choral setting of eight medieval English lyrics, Sacred and Profane. But Britten’s settings of Italian, Russian, French and German, are certainly amongst the most distinctive and very finest examples of his art, each fashioned specifically for a much-loved and favoured artist.

The Seven Sonnets of Michelangelo were completed in America in October 1940 and were the first songs written specifically for Britten’s life-long partner and principal interpreter, the tenor Peter Pears, to whom they are dedicated and unquestionably addressed. The metaphysical love sonnets of Michelangelo are rare in their juxtaposition of emotional intensity and closely worked argument, a tension between the senses and the intellect that inspired Britten to some of his finest inventions in this cycle and a theme to which he was to return towards the end of his life in the last major work he wrote for Pears, the opera Death in Venice.

True to the bel canto tradition that inspired the Michelangelo Sonnets, the vocal line in these songs governs the internal structure and musical language as never before with Britten. The cycle is framed by songs of high rhetoric: the first asserts that just as in art there are high, middle and low styles, so in love one evokes what is fitting to oneself; the final song is a celebration of the immortality of love, the piano and voice only gradually uniting in praise of abiding love. In Sonnet XXI the vulnerability of deep attachment is expressed in gentler, lilting, pleading terms. Sonnet XXX is one of Britten’s profoundest inventions, an intimation of things that can only be realised through the presence of the beloved, expressed in a seamless bel canto that climaxes in a yearning rising ninth in the voice. The more intense dramatic tension of Sonnet LV gives way to the wistful serenata of Sonnet XXXVIII in which the rejected lover begs for the return of his senses so that he may love again. Another ardent setting of Sonnet XXXII precedes the final rhetoric of ‘Spirito, ben nato’. Britten and Pears premiered the Michelangelo Sonnets at the Wigmore Hall on 23 September 1942.

The Poet’s Echo was written during a holiday that Britten and Pears spent in the Soviet Union with Galina Vishnevskaya and Mstislav Rostropovich in August 1965. By this time Britten had already written the Sonata in C (1961), the Cello Symphony (1963) and the First Cello Suite (1964) for Rostropovich and had conceived the soprano solo in War Requiem for Vishnevskaya. Since 1963 he had been considering the possibility of setting Russian texts for a song collection or cycle for the great Bolshoi diva and on his departure from the UK for this Armenian trip he bought a copy of Pushkin’s poems (in Russian with a parallel English translation) for the journey. Britten wrote this cycle while resident at the Composers’ Union in Armenia and the central theme of the work is reflected in the title, referring, to the artist’s struggle to elicit some response from an uncomprehending world, a theme explored from the very outset in Echo. My heart touches on Britten’s personal preoccupation with the heartache so often aroused by the presence of great beauty. The confrontation between Satan and the Angel in the third song takes this tension onto another plane—closer to the conflict between good and evil common to many of the stage works. The next two songs provide strong dramatic contrast, juxtaposing the lyricism of The Nightingale and the Rose with a folk-like Epigram with more than a nod to Mussorgsky—brief, acerbic and thrown off in peasant style.

Lines written during a sleepless night, returns to the cycle’s central theme, drawing the cycle to a close on an uncomfortable, almost eerie note of uncertainty. And the strange circumstances of the first run-through of the cycle, in the Pushkin Museum, towards the end of their trip to Russia, has certainly added to the disturbing quality of the song, as Pears later recalled in his Armenian Holiday diary:

The last song of the set is the marvellous poem of insomnia, the ticking clock, persistent night-noises and the poet’s cry for a meaning in them. Ben has started this with repeated staccato notes high-low high-low on the piano. Hardly had the little old piano begun its dry tick tock tick tock, than clear and silvery outside the window, a yard from our heads, came ding, ding, ding, not loud but clear, Pushkin’s clock joining in his song. It seemed to strike far more than midnight, to go on all through the song, and afterwards we sat spellbound.

The cycle is dedicated to ‘Galya and Slava’ and was first performed by the dedicatees in the Small Hall of the Moscow Conservatoire, on 2 December 1965.

Britten first began arranging folk songs for his war-time recitals with Pears, initially in America and, after 1942, in England. The settings were published in a series of six volumes between 1943 and 1961, with an additional collection for voice and harp completed in the summer of 1976 and published four years later. The volume of eight French Folksongs Arrangements (the second of the published collections) was written for the Swiss soprano, Sophie Wyss, an important artist for Britten in the Thirties, premiering Our Hunting Fathers (1936), On This Island (1937) and Les Illuminations (1939). The collection of French Folksongs, completed in December 1942 and published four years later, is dedicated to Sophie Wyss’s two sons, Arnold and Humphrey, the younger of whom was Britten’s godson. Unlike Britten’s other folksong collections, which aspire to the originality of Percy Grainger though are unquestionably ‘British’ in tone, this volume of French songs sounds authentically Gallic. They also, perhaps surprisingly, reflect Britten’s early admiration of Mahler and specifically Mahler’s own folksong inspired Des Knaben Wunderhorn, notably so in the opening of ‘Eho! Eho!’ and in the Ländler-derived ‘Quand j’étais chez mon père’. As always with Britten (and this is as true of the folksong arrangements as with the art songs) the piano parts intensify the story being told, often providing a commentary or subtext. And if one turns to Britten’s later orchestrations of six of these songs, one gets a vivid indication of the sonorities he had in mind when writing the piano originals—sonorities he himself was able to evoke with extraordinary mastery at the keyboard.

Um Mitternacht was written around 1960. Its precise date of composition is uncertain and it remained unpublished during the composer’s lifetime. It was first performed by the soprano Lucy Shelton and pianist Ian Brown at the 1992 Aldeburgh Festival and only entered the repertory with the publication of The Red Cockatoo & Other Songs by Faber Music in 1994. It’s a poignant and characteristically unsettling reflection on the passing of time, written as the composer was approaching his fiftieth birthday. It is unique in that it’s Britten’s only setting of Goethe, an anthology of whose verse he received around this time from his friend Prince Ludwig of Hesse and the Rhine, the dedicatee of the final song-cycle on the present disc, the Sechs Hölderlin-Fragmente. These were written in the summer of 1958 and described by Britten at the time as ‘probably my best vocal works so far’. They were written as a fiftieth birthday gift for Prince Ludwig, who was a great admirer of the poet. Britten’s six settings (the closest he ever got to writing model German Lieder, though owing more to Berg than Schubert) last little more than eleven minutes; not a note (nor indeed a silence) is wasted in the projection of Hölderlin’s very personal fusion of Lutheran theology and fervent Hellenism. The lyrics dwell on thoughts of middle age and love (Sokrates und Alcibiades), Britten making a characteristically shrewd selection from Hölderlin’s shorter poems and fragments, progressing from a consideration of the fragility of worldly fame (Menschenbeifall) via a characteristic longing for a return to the innocence of childhood (Die Jugend and Hälfte des Lebens), ultimately to thoughts of self-doubt (Die Linien des Lebens). A somewhat strange fiftieth birthday gift, one might think, though it’s likely that Britten and Prince Ludwig shared this perspective on the frailty of their own worldly fame and the inevitability of their advancing years, with all that implies.

Britten and Pears recorded the Sechs Hölderlin-Fragmente for the BBC Third programme on 20 October 1958 and it was subsequently broadcast on 14 November (effectively its UK premiere), just a week before their private performance for Prince Ludwig and his wife, Margaret, at Schloss Wolfsgarten near Darmstadt.