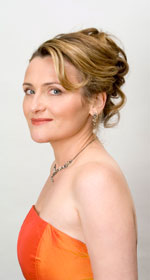 Susan Gritton studied botany at Oxford and London Universities and won the 1994 Kathleen Ferrier Memorial Prize. Recognized as one of the finest and most versatile singers of her generation, her operatic engagements have included Liù (Turandot), Micäela (Carmen) and Marenka (The Bartered Bride) for the Royal Opera House, Covent Garden; Blanche (Dialogues des Carmélites), Konstanze (Die Entführung aus dem Serail), Vitellia (La clemenza di Tito), Fiordiligi (Così fan tutte), Romilda (Xerxes), Cleopatra (Giulio Cesare) and the title role of Rodelinda at the Bayerische Staatsoper, Munich; Ellen Orford (Peter Grimes) for Opera Australia and La Scala, Milan and Donna Anna (Don Giovanni) for the Opéra de Montréal and for the Bolshoi in Moscow. She has sung the title role in Theodora at the Glyndebourne Festival; Countess Madeleine (Capriccio) for Grange Park Opera and her many roles at the English National Opera have included Countess Almaviva (Le nozze di Figaro), Pamina (Die Zauberflöte), Fiordiligi and the title role in The Cunning Little Vixen. She has also sung in innovative staged performances of Sibelius’s Luonnotar in London; Honegger’s Jeanne d’Arc au bûcher in Rome and Handel’s Messiah in Vienna.