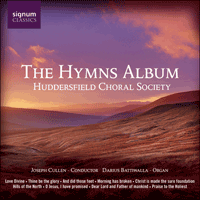 The Huddersfield Choral Society has an international reputation as the UK's leading choral society. Producing a unique and full-bodied 'Huddersfield Sound'.

This disc features some of our nation's most loved hymns and we hope that you'll agree that no better expression of the joy engendered by a goodly number of voices singing these hymns may be found than in the grand forces of the Huddersfield Choral Society. Our range attempts to cover an unaffected, pure lyricism through to a vast, full-throated sound that might shake the rafters of the sturdiest church.

Our previous two hymn and carol albums were released in 1985; both received gold discs for achieving over 100,000 sales.

Hymns have been around in one form or another for as long as people have gathered together in a formal manner to worship, praise, marry or mourn. The modern hymn text can boast a lineage that harks back to some of humanity’s most ancient surviving documents. The earliest known individual who may be called an author, Enheduana, was writing hymns around 2300 BC. The Hindu Vedas, a huge collection of religious texts, contain thousands of mantras and hymns praising a pantheon of gods. Akhenaten’s Great Hymn to the Ahten from around 1400 BC is one of the few surviving examples from ancient Egypt, while the Greeks are well known to have propitiated the Gods and honoured heroes with hymns, dance, libation and sacrifice. Songs and hymns of praise that explicitly employ words or ideas from what we now know as Biblical sources date back well over two millennia to the Hebrews and early Christians. In the Old Testament, King David organized the singers and musicians in the Temple to ‘sing and play joyful music’, while in the New Testament St Mark tells us that Jesus Christ and his disciples sang together at the last supper before going out into the night.

In terms of hymns as we now regard them, the Roman Catholic, Lutheran, Anglican and Methodist churches have each enriched the tradition by contributing a mass of texts, melodies and arrangements. The hymn has therefore known an ever-changing myriad of music and textual sources from simple church chants (plainsong) through polyphonic settings and Lutheran chorales to the great English Wesleyan revival. The hymn continues to avoid absolute pigeon-holing, even in the last century, by taking on different guises—from negro spirituals and Gospel choirs to so-called ‘charismatic’ songs and the contemporary rock-based sound. The thread that binds these forms and styles, straddling thousands of years, whether performed by a solo celebrant, voice and guitar, Lutheran choir or an electric band, is the congregational nature of the hymn. Everybody present is intimately involved with the performance. With a single song and its text in mind the congregation becomes as one.

Just as Northern Germany had Martin Luther to clearly define its hymnody as a congregational practice, so England had Charles Wesley to spark a new revival. Known as ‘the Poet of Methodism’, Wesley completed more than 5,000 examples and almost single-handedly raised the profile of the hymn in England, and eventually, worldwide. Charles Wesley (and his brother, Methodism’s guiding light, John) are in no small measure responsible for the hymns we know, love and sing from week to week. The hymns on the present CD are thus part of a living, breathing tradition, built on by succeeding generations to suit the prevailing style and taste.

Evocative names such as Blaenwern (Love divine all loves excelling), Woodlands (Tell out, my soul), or Nun danket (Now thank we all our God) refer to the actual hymn tune itself, independent of whatever text is sung and arrangement employed. The reason for this dislocation is simple expediency as texts and tunes may be interchanged when the metre allows. Some of these names are blurred by the mists of time while others refer to place names, family names, persons or even a word relating to the original text for which the tune was composed. Diademata refers directly to the text with which it is most often associated, Crown him with many crowns, while German names, such as Nun danket, will often refer to Lutheran hymn tunes appropriated for use with English translations or newly minted texts.

The hymn tunes can be old folk songs adopted and adapted for church use, utilising new texts to suit their new purpose or they might be melodies from popular music, oratorios or other quasi-religious works. A further sub-set comprises those tunes composed afresh with a particular text in mind. All of these melodies, in turn, may be arranged and harmonised, for whatever forces are available, by anybody from a keen amateur, the local choirmaster and collegiate choral specialists to the very greatest of composers.

The arrangements as sung by the Huddersfield Choral Society range from the simplest of unison verses with organ accompaniment to sophisticated multi-part writing with descants, full organ, brass and timpani. As ever, the descants, those spine-tingling, high soprano parts that are set high above the rest of the choir, are kept for special moments in numbers such as Now thank we all our God, and Lord, for the years. These soaring counter-melodies, while reflecting the style of the hymn tune, flavour the final verses with greater musical interest and help create tensions that drive the music of an increasingly complex hymn tune arrangement to a satisfying and thrilling close. Counter-melodies emanating from the brass section bring a truly impressive grandeur to Jesus Christ is risen today, in which the final verse is made resplendent with full organ, timpani and flourish after flourish from the trumpets. Hills of the North, rejoice is an impressive example of how the arranger’s art continues in a modern vein whilst retaining the essential ‘Englishness’ of the hymn tune. The organ and brass evoke the very same inner strength and distant power that characterise the orchestral works of the Czech composer, Leoš Janáček, but Martin Shaw’s simple and affecting hymn tune remains as English as its name, Little Cornard.

No better expression of the joy engendered by a goodly number of voices singing these hymns may be found than in the grand forces of the Huddersfield Choral Society. Their range covers an unaffected, pure lyricism through to a vast, full-throated sound that might shake the rafters of the sturdiest church.