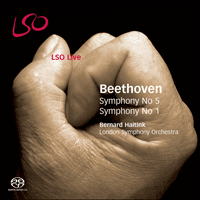 Beethoven again raised the expressive force of the genre with his Symphony No 5 and introduced a theatrical element to it. Beginning with the most famous phrase in classical music and one of the most joyous, uplifting movements as a finale it is an exhilarating experience. Beethoven didn't complete his first symphony until he was almost thirty and it marks the beginning of his remoulding of the symphony away from the Classical ideals of Haydn.

'An excellent Fifth … such instinctive, unostentatious musicianship is as rare now as it ever was' (Gramophone)
'Without being quirky Haitink presents it in a way that feels utterly fresh … the results are exhilarating' (BBC Music Magazine)

Time and familiarity, those old enemies of innovation, have conspired to mellow the impact of Beethoven’s Fifth on the modern ear. This most famous of classical orchestral pieces has often been in danger of acquiring from frequent repetition a cosiness and a friendliness that can dull its surprises, soften its blows. Yet this is the same work which caused the French composer Jean-Francois Le Sueur to be so bowled over when he first heard it in 1828 that, on reaching afterwards for his hat, he could not find his head. His pupil Berlioz (to whom we owe this anecdote) visited him the next day to be told by an impressed but evidently disturbed Le Sueur that ‘that sort of music should not be written’.

Clearly, whatever the Fifth Symphony was to its earliest audiences, it was not comfortable. Those who took their seats in Vienna’s Theater an der Wien on 22 December 1808 for the concert in which the work was first performed would doubtless have had some idea what to expect. Anyone who had already heard his Third Symphony, the ‘Eroica’ or indeed the ‘Pastoral’ Symphony that was also premiered earlier in the same concert would have known that Beethoven had greatly expanded the timescale of the symphonic form, raised its level of seriousness and expressive weight, and brought to it an increasingly theatrical, even narrative strain. But few can have been prepared for the brusque, almost visceral assault this unique work was to make on their senses.

Where did it come from? Well, Beethoven was a revolutionary of course, but he was one who worked within an established tradition, and who was subject to his fair share of influences. Several of these come together in the Fifth Symphony. One was Mozart, with whom he shared a special feeling for the expressive power of C minor (both men composed some of their most emotional and personal works in that key); another was the large-scale, open-heartedly bombastic music composed for the public celebrations of Revolutionary France (that Le Sueur had himself been a leading composer of such music lends a peculiar irony to his reaction to the work); and a third was Haydn, his teacher, who time and time again had shown in his string quartets and symphonies how to construct whole movements from small but highly pregnant thematic cells.

This last influence is undoubtedly at its most potent in the Fifth’s highly dramatic first movement, totally dominated as it is by the urgent four-note motif with which it opens. Not that it sounds in any way like Haydn. The music here is astonishingly terse, pared down to the melodic minimum, and the second theme is quickly upon us: a relaxed expansion of the main motif on horns, answered by a reassuring embrace from the violins and woodwind. Yet it is this consolatory theme which, after a belligerently combative development section (in which the music is at one stage reduced to a stark dialogue of chords between wind and strings, as if two exhausted warriors were pausing for breath) reappears in swirling, nightmarish transformation in the movement’s long and turbulent coda.

There is more than a hint of Haydn’s influence, too, in the slow second movement, which has the overall shape of one of his favourite forms, the ‘double variation set’ in which two themes are varied in alternation, often in successively diminishing note values. Beethoven’s themes are both in A flat major, but the second – rather march-like despite being in triple time – soon modulates unexpectedly to C major, where it acquires an extra grandeur and, incidentally, provides a brief foretaste of the mood of the finale. At the end of this particular movement, however, it is the more graceful first theme which wins the day.

Beethoven does not call the third movement a ‘scherzo’, though in form and function it is one. But if there is humour here, it is of a grim cast and beset by uncertainty. When a sturdier theme emerges, it is brief and troubled, dominated by a balefully intoned horn-call transformation of the four-note motif from the first movement. The mood lightens in the scurryingly fugal major key ’trio’ section, but at its reappearance the first theme, played pizzicato and pianissimo, takes on a stealthy, nocturnal character, before leading us to the most celebrated passage in the whole symphony. Here, over held string notes and sinister tappings from the timpani, wisps of the first theme are heard, leading us for the moment we know not where. Gradually the excitement rises, as with the sense of something seen approaching from a distance, until with a last sudden rush we find ourselves propelled into the blazingly triumphal C major of the finale. It is one of the most upliftingly theatrical moments in all music, and the unequivocal joyfulness of the ensuing movement (almost unremittingly loud, by the way, and reinforced for the purpose by Beethoven with trombones, piccolo and double bassoon) is not even diverted by the brief, perhaps mocking reappearance about halfway through of the third movement’s main theme, now gloriously overcome.

Whether one experiences the Fifth Symphony as a journey from darkness to light, a depiction of adversity overcome, or as an emergence from some sort of underworld, there is no doubt that it has an effect on the listener that goes beyond the appreciation of its musical and formal niceties. Beethoven himself has left little clue as to what the symphony is ‘about’, save for a possibly apocryphal remark to his friend Schindler about the first movement: ‘thus Fate knocks at the door’. Yet we know that he thought of many of his instrumental works in programmatic terms; whether or not we as listeners can guess these programmes correctly, the fact that in his greatest symphonies we sense them with such ease and general uniformity is proof of his success. It was with this realisation of the genre’s extra-musical potential that Beethoven was to set the tone for the next 100 years of symphonic writing.

Beethoven did not hurry to send his First Symphony into the world. When it was premiered in Vienna on 2 April 1800 he was approaching 30, and had already made a name for himself as a stirring virtuoso pianist (he had been performing his first two piano concertos for several years), and as a composer of muscular chamber works and piano compositions, some of which were strikingly forceful and modern. In fact, the symphony was not the only form with which he was slow to engage: his first string quartets were not published until 1801, and it is surely no coincidence that the string quartet and the symphony were precisely the genres at that time associated above all with Joseph Haydn. Beethoven’s relationship with Haydn – with whom he had studied in the early 1790s – was an uneasy one, but there is little reason to doubt that the idea of moving in on the vastly respected older composer’s ‘patch’ was a daunting one, even for Beethoven.

When he did enter the symphonic arena, it was with what seems a surprisingly cautious work, at least to ears familiar with the other eight symphonies. The model is the Haydn of the ‘London’ symphonies for sure, in its layout of four movements with slow introduction, in its orchestration, and in many of its compositional processes, not least the way that fragments of themes can be used motivically, sometimes to accompany, sometimes to provide a driving force; there are even echoes of Haydn’s C major Symphony No 97 in the main theme of the first movement, and in the perkily demure nature of its counterpart in the second.

Yet to listeners at the time, there were plenty of things to make them sit up and take notice, though not always favourably: ‘a caricature of Haydn pushed to absurdity’ was how one critic described the new symphony, no doubt disconcerted by the fact that the slow introduction meanders its way towards the main body of the first movement via some surprising discords, or that the third movement seems to get by without much in the way of a tune, or for that matter much feel of being a minuet. Perhaps, too, the sheer ebullience of the music was hard to bear, for there is no mistaking its Beethovenian energy and dash. Whether they actually liked it or not, its first audiences cannot have failed to be aware that there was something new in the air.

Only hindsight, however, can alert us to the prophetic nature of the slow introduction to the finale, in which timid upward scales eventually discover that they are part of the movement’s cheerful main theme. Here the context is comic, but it was an innovation to which Beethoven would return with more serious intent.