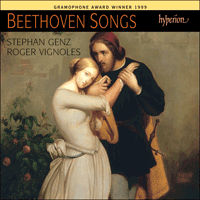 While Beethoven remains the single most influential figure in the history of Western music, his songs have always been somewhat sidelined. He saw music as a world of infinite possibilities, largely unencumbered by textual concerns, but when issues about which he felt strongly enough to express them through a sung text did occur the results were remarkable. At the large end of the scale we have the Ninth Symphony finale, Fidelio, and the Missa Solemnis. And then there are some eighty fascinating Lieder.

This charming recital of many rarely-performed songs includes the monumental An die ferne Geliebte cycle, and the six Gellert settings.

Although many of Beethoven's own settings are essentially strophic in nature, his songs mark the first moves towards the 'through-composed' form later perfected by Schubert—the inherent simplicity of the strophic model was far too limited in scope for someone of Beethoven's profound musical intelligence. The supreme effort of producing these songs seems to have come from an elemental desire to express his innermost feelings—there is little surviving evidence of any formal performances of Beethoven's songs during his own lifetime.