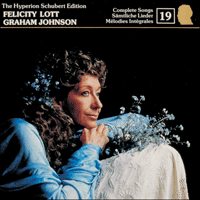 There are two letters, one from 1825, the other from a year later, which give us a glimpse of the composer as a lover of nature.

We lunched at Herr Pauernfeind's, and in the afternoon, when the weather allowed us to go out, we climbed the Nonnberg, which is not high, but affords the finest views, for one overlooks the inner Salzburg valley from there. To describe to you the loveliness of that valley is almost impossible. Think of a garden several miles in extent, with countless castles and estates in it peeping through the trees; think of a river winding through it in manifold twists and turns; think of meadows and fields like so many carpets of the finest colours, then of the many roads tied round them like ribbons; and lastly avenues of enormous trees to walk in for hours, all enclosed by ranges of the highest mountains as far as the eye can reach, as though they were the guardians of this glorious valley; think of all this, and you will have a faint conception of its inexpressible beauty [so hast Du einen schwachen Begriff von seiner unaussprechlichen Schönheit].

Here we find the composer in unusually eloquent letter-writing mood; he is coming to the end of his holiday in Upper Austria in the company of the singer Johann Michael Vogl and he is liberated by his distance from Vienna and elated by what he sees. The observation of nature doubles as a deeply personal article of faith, for the paragraph quoted above is something of a compendium of Schubert's musical concerns. Thus the river is not only the subject of much of his music with watery themes, but it twists and turns as if in delightful modulations; it is enriched by multi-coloured harmony in the guise of fields of flowers; it is packaged into song garlands by ribboned pathways, and the whole is enclosed by the mountains of endless aspiration and discipline which seem to be the guardians not only of the valley, but also of Schubert's own precious gift. It is as if the composer is seeing in the panoply of this mighty garden a bird's eye view of the power of his own creative possibilities.

Schubert words 'think of a garden' are very revealing. He had to think of gardens and their contents a great deal (as we know from the subject matter of hundreds of songs mainly written in the big city) and he now had the opportunity to see the real thing on the grandest scale. It is perhaps hard to imagine the somewhat sedentary composer climbing mountains and walking for hours in tree-lined avenues (ambling with a pipe rather than striding with a stick would have been more his style) but there is no doubt that like his successors Brahms and Wolf, Schubert relished the chance of coming face to face with nature and found it a regenerative experience – indeed a vital source of inspiration for song composition.

The letter from the end of May 1826, written in Vienna, presents the composer in a more familiar urban light:

I am not working at all – The weather here is truly appalling, the Almighty seems to have forsaken us altogether, for the sun refuses to shine. It is May, and we cannot sit in any garden yet. Awful! Appalling! Ghastly! [Schrecklich! fürchterlich! entsetzlich] and the most cruel thing on earth for me.

Here is evidence that when the seasons seemed out of gear, the composer's compositional schedule was disturbed – he was not able to work. He was ill at the end of May, and it is clear that the cold and wet weather hindered both mind and body. It is also clear that sitting in the garden (almost certainly of an afternoon, or early evening) was an everyday pleasure which refreshed him and helped him to continue with the next morning's task. We have few clues as to whether Schubert was knowledgeable about flowers, trees, plants and so on, or whether, like the miller-boy he was 'ja auch kein Gärtner' – no gardener) but he was probably rather well informed about the natural world. Vienna in those days was a small city, the countryside within easy reach. From the following list (the first step towards a full concordance of the subject matter and imagery of Schubert's song) it is clear that in setting other men's poems to music, he daily came across images drawn from nature. Of course these words were not of his own creation so we cannot be sure that various tree and plant names evoked accurate and specific pictures in the composer's own mind. Nevertheless it seems likely that Schubert cared enough about the beauties of the fruits of the soil to be on familiar terms with a number of their manifestations. The purpose of this list is to show at a glance the parameters of the natural world (in terms of trees, flowers, fruit and other plants) in Schubert's everyday song-composing life, and within which he worked and moved as both composer and man. It is comforting and revealing that apart from a certain Germanic bias toward the vegetation of Nordic forest and Austrian mountain, the species of flower, tree and herb remain familiar and accessible to English-speaking Schubertians. In reference to such commonplace terms as 'blossoms', 'buds' and 'groves' (not to mention the excluded 'fields') this mini-concordance is necessarily selective; obviously much depends on how many verses of the longer strophic songs have been taken into consideration. Poets' names have been given only when there might be confusion between songs of the same title. In certain cases the flower imagery is essential to the sense of the poem; in many instances it is incidental and only passingly illustrative. But then the quietly growing lilies of the field have often been taken for granted, as was the composer himself in his own lifetime; Schubert was thought by his well-meaning friends to be vegetating when he was quietly spinning threads of gold to rival Solomon in his glory.