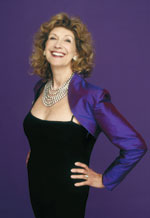 see also Dame Felicity Lott (reader)
Felicity Lott was born and educated in Cheltenham, read French at Royal Holloway College and studied singing at the Royal Academy of Music. On the opera stage her performances of Strauss and Mozart roles in particular have led to critical and popular acclaim worldwide. She has appeared at the Royal Opera House Covent Garden, Vienna State Opera, Glyndebourne Festival and Bavarian State Opera and in Paris, at the Opera Bastille, Opéra Comique, Châtelet and Palais Garnier. In the United States she has performed at the Metropolitan Opera New York, the San Francisco Opera and the Lyric Opera of Chicago.

She has given recitals at the Salzburg, Munich, Prague, Bergen, Aldeburgh and Edinburgh festivals, the Musikverein and Konzerthaus in Vienna, and throughout Paris. She is a Dame Commander of the British Empire and a Bayerische Kammersängerin, and has also been awarded the titles Officier de l’Ordre des Arts et des Lettres and Chevalier de l’Ordre National de la Légion d’Honneur. In February 2010 she received the Wigmore Hall Medal marking her significant contribution to the hall.